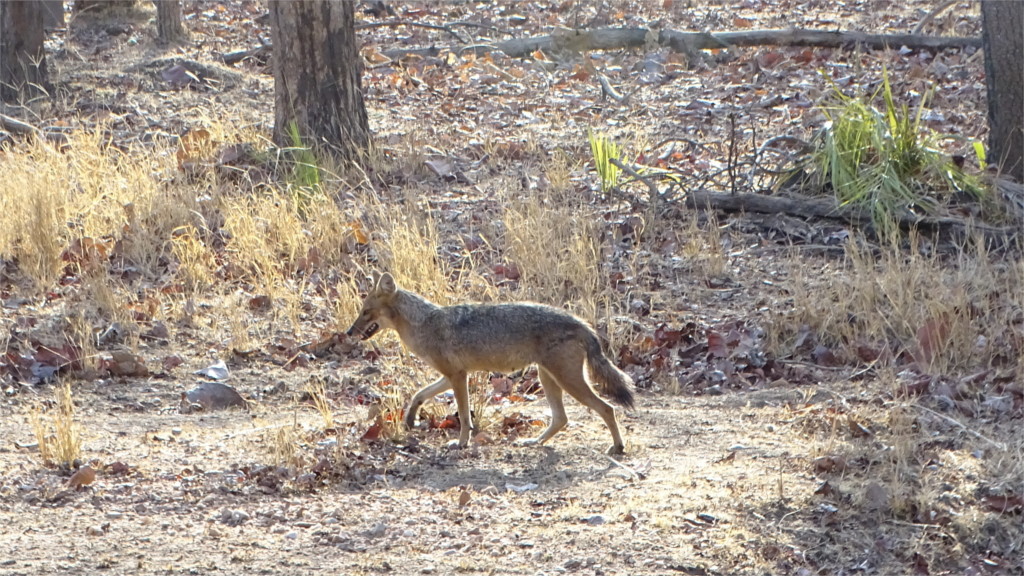 The IUCN Red List tells us that the golden jackal (Canis aureus) "is fairly common throughout its range with high densities observed in areas with abundant food and cover. They are opportunistic and will venture into human habitation at night to feed on garbage." It is true that in small towns and villages you can still hear the call of jackals, and travelling on a highway at night you can see one lope off into the darkness now and then. However, the few times I’ve had good sightings of these shy creatures have been inside protected forests like Pench National Park.

If you go by the call of the jackal, you may be fooled into thinking that they are nocturnal. However, both the jackal sightings I had in Pench were in the middle of the day. The first time was the fight between a jackal and a gray langur, and the second time I just saw one trotting away next to the track our jeep was following (featured photo). A study which tracked many jackals using radio collars explains how this can happen. A jackal is actually diurnal, but also active at dawn and just after dusk.

The Red List says that the jackal’s habitat includes Africa, the middle east (from where it has moved into Europe in modern times) and India. Usually it is fairly reliable and up-to-date on these questions. However, this seems to be an exception. Startling new DNA data published in 2015 showed that these two populations are different species which diverged about a million years ago. It was suggested that the African species, Canis anthus, be called the African golden wolf, whereas the Eurasian jackal continue to be named Canis aureus.

It was the jackal—Tabaqui, the Dish-licker—and the wolves of India despise Tabaqui because he runs about making mischief, and telling tales, and eating rags and pieces of leather from the village rubbish-heaps.
—Rudyard Kipling, The Jungle Book

An older paper gave me some background to understand this. It turns out that among dog-like animals, the jackal is the basic form, which has differentiated into wolves a few times in history. Dogs, of course, are very closely related to wolves. As a result, dogs easily hybridize with wolves, but crosses with jackals are unviable. The group of jackals, wolves and dogs is sometimes called a species complex, because of their close relationship. In any case, the new finding was so startling that National Geographic called it the first discovery of a new canid species in 150 years.

I enjoyed watching these graceful creatures. Although they may not be immediately threatened, their habitat is slowly disappearing. For some time they may adapt to human presence, but as forests are replaced by parking lots, they will inevitably go the way of the dodo,