Don’t even think about it. Yes, we all know that there is a rose garden in Munnar. We have all read the great reviews. But don’t promise one. It has no roses. It is full of people bumbling about, looking cross, although there are absolutely spectacular flowers. All because someone promised them a rose garden, and they don’t think a garden without roses is what they were promised. 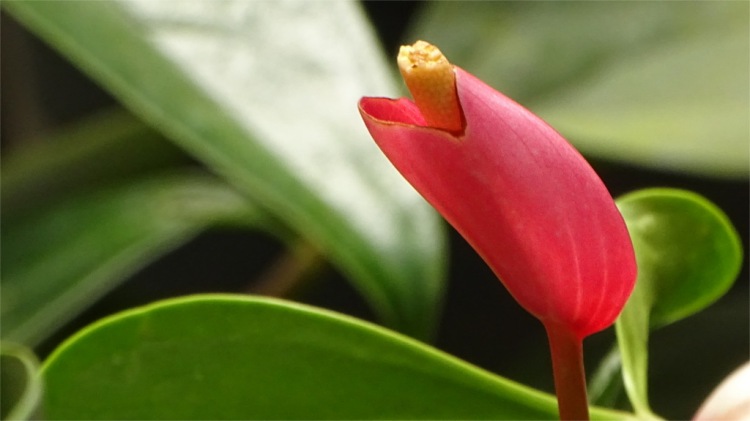 The one thing in Munnar which I had low expectations of, and which therefore stunned me totally was this garden off on the eastern part of town. The entrance to the garden is at a pretty narrow spot in the road, and the people entering and leaving cause a bit of a traffic jam. On the steep slope below the road is the garden. There is a little charge for entry, but it is well worth paying.

The flowers here are unusual and you are unlikely to be able to find a better place to spend an hour in the town.

I’m not an expert gardener. I know my roses and lilies, marigolds, vinca and zinnia. I can tell an Iris from a Pansy, and I’ve learnt the difference between a peony and a petunia. Otherwise I talk of blue flowers and yellow flowers.

Close to the entrance was a whole bunch of flowers which I think of as Anthurium. I’ve only seen a couple of varieties before: both with a yellow spadix, one had a red spathe, the other white. Here there was such a variety of colours of both that it was clear that some of them are hybrids. They must be breeding them here.

We walked past flowers which I cannot name (a couple of pictures above), and then reached a lower aisle where every flower was labelled. We stopped to admire the flower here (called "Lady’s slippers"), which is possibly an orchid. The plant is a creeper. There was a little walk where the plant had been allowed to form a roof over a lattice covering the walk, making a green tunnel. The flowers hung in bunches from the green walls, looking really pretty. 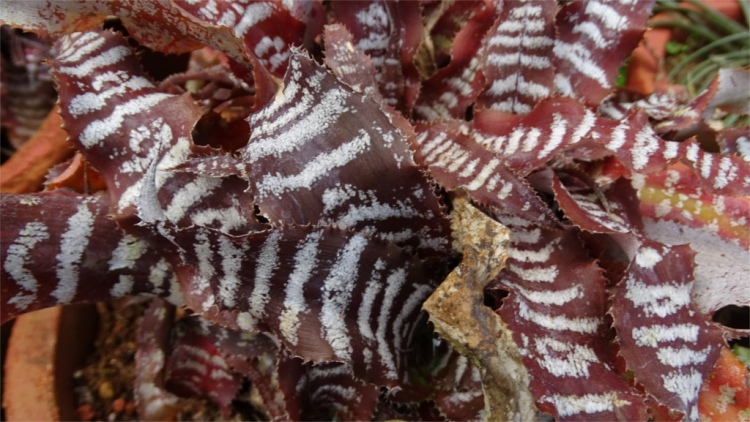 Further on we came to the cacti. We’d seen several before, but there were some spectacular Hawthoria among them. The specimen above was labelled Hawthoria fascita but could well be Hawthoria attenuata. The usual way to distinguish the two is that the attenuata has stripes on both sides of the leaf. The attenuata also develops this nice red colour if it is in the sun long enough.

The final section of the garden had orchids. We’ve seen a spectacular orchid garden in Gangtok. This selection was smaller, but there were some very nice ones here, including the Cattleya shown on the left. The walk through the garden took us about an hour.

The Sessa Orchidarium is not hard to spot. On our way up from Bhalukpong we’d seen it on the right flank of the highway just after passing through Tipi, and marked it down as something for later. On the way down we saw again the gate above which is a large board which says "Sessa Orchidarium". Although we were fairly sure that November is not a time when orchids flower, we visited it because it was so easy to spot.

We drove in. There was a ticket booth, but it was not manned. The gate was open, and we drove through to the parking lot. The person selling the ticket arrived when we were about to leave. Near the parking lot was a map of the Orchidarium.

The place is large. There are many sections with naturally growing orchids. In the wild we had seen orchids growing on large trees. One part of the grounds was full of these trees. When I walked among them I saw orchids growing; very few of them were flowering. It would have been nice to know more about them, and I wished this section was labelled and had more information.

The locations of greenhouses were marked on the site map. We walked on to one. It was standing open. Until now we had seen no one. Now we spotted someone walking past. He stopped when we asked him where we could go, and he indicated the open door. Inside were the usual spectacular hybrid varieties. We saw many Cattleya. This was a little bit of a surprise, because the genus Cattleya is not found in the wild in these regions.

Orchids are special enough that we spent a while walking slowly through the aisles. Few flowers were in bloom, but the ones which were looked lovely. It seemed to me that we had seen most of them before. At this time of the year the greenhouse was pleasant but not spectacular. I think it will be a riot of blooms in April or May. Unfortunately, even in the hothouse, labelling was minimal. If each plant had been labelled, we could have looked up information on it with our phone as we walked through.

When we emerged, the place was still deserted. We could have walked into other fields and other greenhouses, but the story would have been similar. It was hard to be enthusiastic about the Orchidarium in winter, especially as there was no information on what we were seeing. Clearly there is a laudable effort to cultivate and preserve. Since this place calls itself a research centre, one has the feeling that this part of the work is being done with some enthusiasm. But it also invites public participation, always a good thing for scientists to do. A little more thought given to educating the public about orchids would have been very welcome. The Family and I are determined to go back, and the next time we will try to go in the company of a botanist who knows about the local orchids.