Four years ago I read news about the Chinese government destroying large amounts of smuggled ivory in an effort to curtail the illegal trade. Ivory trading is now banned in China, but most of the remaining trickle of illegal trade now passes through Guangdong. There is a reason for this. Ivory carving is an old traditional craft in Guangdong province. I had not connected these pieces of information until I saw the small exhibition of ivory carving in the Chen Clan Academy in Guangzhou. The 19th century oil painting of a mandarin on a sheet of ivory (featured photo) is not something that needs to be repeated today, since a work like this could well be executed on some other surface. It is an interesting style though; the treatment seems completely western.

The most stunning piece was one called “March into the Great Southeast”. This was carved by Guo Kang in 1958. The incredible piece (a detail from which you can see in the photo above) is carved from a single tusk. The rendering of the scenery and of an army toiling through it are stunning. This is, of course, a piece of propaganda in the style of Socialist Realism, but that does not subtract from its value as art. It translates the subjects of classical Chinese paintings quite accurately into this other medium.

The ivory carving of an 11 layer boat was made in 1990 by Pan Chuju. The details are stunning. Just that chain near the bottom edge of the photo, carved out of a single piece of ivory, would be a major technical job. The cantilevered bell, the decorative elephant heads, and all the little details are stunning. While I could appreciate the technical mastery involved, the piece somehow left me a little cold.

There were many smaller pieces. This small 19th century brush washer was typical of the exhibits. The artful asymmetry and visual balance places it quite definitely in the Chinese aesthetic tradition. The Family and I stood in front of this piece. As I thought about the kind of wealth and leisure that this piece implies, The Family said “Let’s go and see the paintings.”

During one dinner in China, after much alcohol had been downed with toasts, conversation turned to calligraphy. I was surprised to hear the general opinion that Mao Zedong was considered to have produced very good calligraphy in the classical style. Recently, seeing that the brochure of the Tate gallery’s exhibition of Social Realist art from China quoted Mao extensively, I realized that he was quite strongly aware of the potential of art to subvert or accelerate social change. As early as in the Yan’an conference of 1942, Mao made statements that prefigured the philosophical basis of what came to be called the cultural revolution. This is an example: “The life of the people is always a mine of the raw materials for literature and art, materials in their natural form, materials that are crude, but most vital, rich and fundamental; they make all literature and art seem pallid by comparison; they provide literature and art with an inexhaustible source, their only source.”

A part of the permanent exhibition in the Chen Clan Academy of Guangzhou is a roomful of small glazed ceramic pieces which are clearly made in the Social Realistic style. The pre-communist nationalist movement created a ferment in the art world, with many artists experimenting with western styles. This was carried to an extreme in Social Realism, as you can see in the examples here (notice the fedora carried by the man who takes the bull by the horn). Looking closely at these pieces, I realized that there is an individuality to each. Within the constraints of the system, they are still expressive of the artist’s vision. What else does one ask from an artist but technical mastery and individual vision?

According to Wikipedia, the Chen Clan Academy was saved from destruction during the Cultural Revolution by local officials who converted it into a printing press for publication of the works of Mao Zedong. Today, it is saved from obscurity by making it into a museum of folk crafts. The first thing we noticed is pottery. Glazed pottery is, of course, one of the ancient Chinese arts, so we were very happy to find several cabinets full of wonderful pieces here.

The gold-painted glazes called Kwon-glazed pottery are perhaps what an untutored eye like mine recognizes most swiftly as Chinese pottery. Private collections all over India and Europe are full of these. Interestingly, these were only produced for export during the last years of imperial China, during the Qing dynasty, in Guangzhou. Plain pottery was sourced from Jingde town, and coloured and glazed to order. The Chinese government in 2008 recognized it as an intangible cultural heritage, like the other three styles that we saw here. 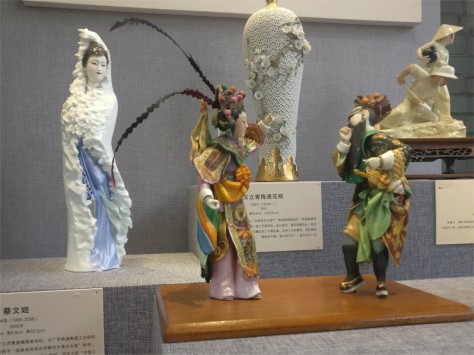 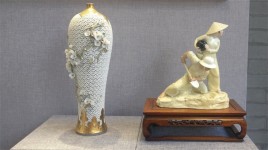 It is possible that Kwon-glazing was trying to rip-off the 1200 years old tradition of Fengxi porcelain. Pieces from this town in Guangdong province have bright colours on a high-gloss white background. The decorative pieces we saw here were well chosen examples of the traditional figures, largely drawn from opera and historical stories. I loved the dramatic poses, and wished again that I’d got to see the opera. This kind of pottery is also very visible in private collections in India and Europe. 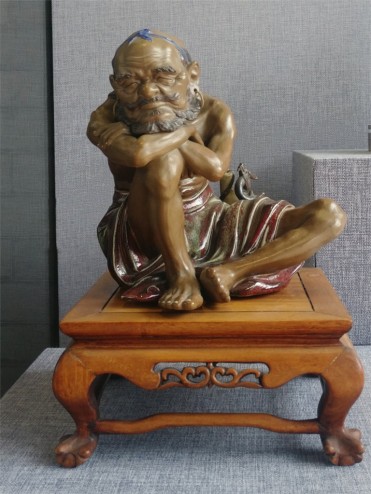 The more earthy Shiwan pottery is actually my favourite. I like the thick and dark, but glossy, finish of these figures. The Family had collected a few small pieces during her student days, and my mother admired them hugely when she first saw them. The human figures are not elegantly operatic, but are in the style of peasants: sitting or working. I liked this pair of partridges clinging to a steep rock. This style comes from Foshan town in Guangdong province, and apparently developed during the Tang dynasty, perhaps 1400 years ago. 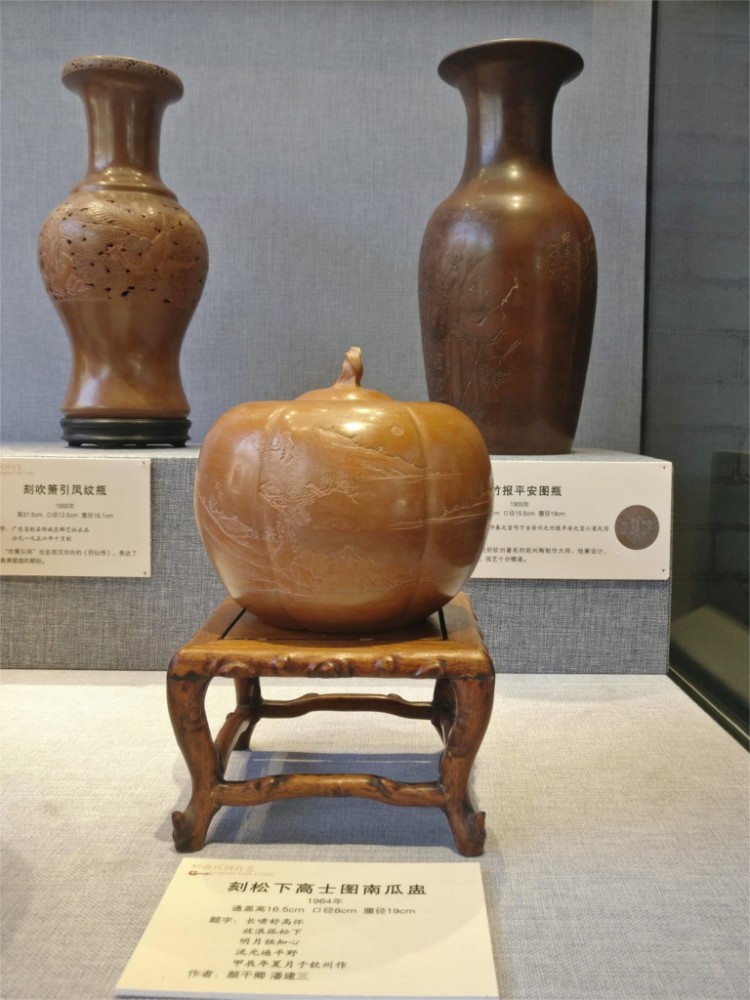 Nixing pottery from Qinzhou town in Guangxi province, near the Vietnam border, can be seen in every tea trader’s stall in China. These are the beautiful unglazed red earth teapots that I kept thinking I should buy. One of the cabinets here held several pieces which were not connected to tea. I learnt that over ten thousand people are involved in this craft today. The variation in colour comes not only from the clay but also by small variations in the temperature at which pieces are fired. The pieces are similar to others which are found across south Asia. My grandmother swore by the unique flavour imparted to food and water kept in unglazed fired-earth pottery, and I found that the Chinese also have variants of these feelings about the use of Nixing pottery.

I had a quick look at the history of the Chen Clan Ancestral Hall of Guangzhou before we left India. It came highly recommended, but I was faintly disappointed to see that it was built as recently as 1895 CE, and that too by two Chinese-Americans who returned to Guangzhou. The intention was to provide a training academy for the Imperial civil service examination to young men (I don’t think women took the exam then) from the 75 families of this clan. Within 15 years the exams were history, and the clan turned its holdings to other ends.

An exit from the Chen Clan Academy metro station deposits you right at the door of the complex. The free standing gate which we saw (photo above) is a staple of travel posters and coffee table books about Guangzhou. I’d seen this photo of the gate in a book in our hotel room, and had no idea where it was. I was surprised and happy that it was here.

The decorations on the external walls are stunning: whether they are representations of birds (as in the featured photo) or googly-eyed lions, phoenixes goosing pigeons, scenes from Cantonese opera or the countryside (as in the slideshow above). The clay images overwhelm your eyes, and I found that I had to examine them one by one in order to make sense of them. Not being tuned to the asymmetry of the Chinese decorative style also presented a problem which I had to resolve by scanning these clay images very slowly. The result was that it took me a long time to just walk into the complex.

The entrance is past these grand doors with their painted dwarpalas (heng ha er jiang in Mandarin). I saw many of these fierce guards painted on doors in Guangzhou. I suppose that by the late 19th century CE every one wanted their doors to be guarded by such guardians. Space must have been too precious to install the statues that earlier would guard temple doors. So the paintings were a neat cultural evolution. I was so engrossed in looking at the arms and armour carried by the dwarpala that I nearly missed the lion-head knockers on the doors.

I guess I will write another post about what we saw inside. But one thing that I need to put into this post are the lovely doors we saw inside. They are a little battered today, but they are elegant in a very understated way. “Quite different from the rest of the decorations” The Family said when she saw them. I wondered how they escaped unscathed through the cultural revolution.