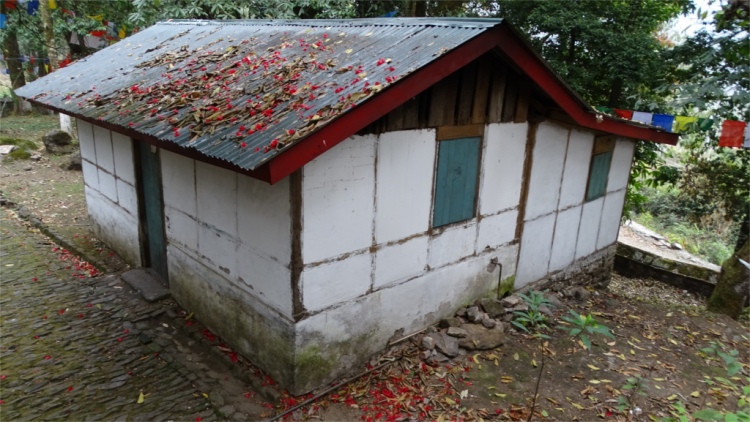 Sikkim is the most accessible part of the belt running across the Himalayas where Rhododendrons grow. We’d seen them wilting when we visited Yumthang a few years ago in early May. Now, in early March we saw them in bloom when we visited the Norbugang throne in Yuksom. We sat on a bench in the garden near the throne and looked at the deodars festooned with prayer flags. Below them were the bushes of Rhododendrons, heavy with flowers. Some had dropped around a little building lower down. It was quiet, pleasantly cool, and serene. I composed a little piece of doggerel and recited it to The Family: “My blood is red as a rhodo, until I become as dead as a dodo”.

She said, let’s go to the Barsey Rhododendron Sanctuary. I’d read about this before coming. It seems that you can reach it if you take a long walk, some say 8 Kms, from Uttarey in the north or a short walk, about 3 Kms, from Hilley in the south.

I’d hesitated to do this because we didn’t know the terrain and couldn’t predict how long it would take us to cover 16 Kms. Now we decided to travel to Hilley and take the shorter walk. It turned out that Hilley was around 80 Kms from Pelling, over roads that were not in very good shape. The drive took us 4 hours. We passed through beautiful roads, the greenery blooming red with flowers of the rhododendron. Hem Kumar told us that his friends did not believe he would see the flowers today.

My faith in Hem Kumar’s unfailing fallibility grew as we climbed, and the red flowers became rarer.

It was probably too early for high-altitude flowers inside the Barsey sanctuary. It turned out (map above) that Hilley was already inside the sanctuary, and the 3 Km walk was to a nearby ridge from which Kanchenjunga would be visible. The bright sunshine of the morning was hidden behind fog and clouds as we started on the path. We saw some leaf warblers and tree-pies in the dense jungle. Little streams flowed down the rocks next to the path. Primulas bloomed everywhere. Rhododendron buds were visible on every tree. They would flower in a week or two. It was a lovely walk, until it started to rain. We turned back after about twenty minutes of walking, perhaps somewhat over a kilometer.

The Family reminded me of the Rhododendron juice we drank on our previous visit to Sikkim. Hem Kumar didn’t know of it. A journalist, Sumana Roy, has a peculiar recipe for rhododendron chutney: “A handful of flowers, about five or six fresh red rhododendrons, crushed into a paste with a clove of garlic, a tomato, and its sweet-sour balance refined by the addition of pomegranate juice or molasses and mango powder, depending on individual preference.” On the other hand, there are warnings, persisting to modern times that all parts of tree are poisonous, even the honey. Perhaps these are like mushrooms, some species are poisonous and others are edible.

As we exited the gate of the sanctuary, we saw some birds foraging nearby. One fluttered from a little hut to a bush. My first impression was that we it was a coucal, but The Family realized that it was something else. We stood still, and the bird flew next to us. This was our first view of the chestnut crowned laughing thrush. My camera was packed away in my backpack. We stood still and watched.

Eventually, The Family reached into my backpack and handed me my camera. As I sighted, the bird flew off into a dark undergrowth. We spent the next day at a lower elevation and saw many kinds of Rhododendron. The ASI has planted many varieties in the garden it maintains around the ruins of the Rabdentse palace. This photo shows something which is perhaps visible only in this part of the world: Rhododendron and bananas next to each other.

We have bracketed the flowering season of the Rhododendron: after early March and before May. We need to visit Sikkim in early April once.