If there’s one thing you will see in a market in the northeast, it is chilis. Not the variety that can be safely grilled and eaten, but the things that look like a parrot’s beak: red and dangerously sharp. The main market of Sohra lived up to expectation. Walking between the cramped aisles I came to a stall which held an enormous heap of chilis and nothing else. Another time The Family would have picked up a good quantity to take home, but she gave it a pass.

This time around we didn’t have time to go back to the market, so I dug up some of the photos I have from our visit five years ago. I didn’t know it then, but Sohra is famous for its oranges. A large square-footage of the market was given over to them. The oranges are flavourful. The women selling them were in tribal-style dress, the shawl tied across the body so that it can be used as a back pack, as well as raised into a hood to cover the head.

Being able to cover the head at short notice is clearly important in one of the rainiest parts of the world. Outside the market a young boy sat guard next to his family’s shopping bags and umbrella. He couldn’t make up his mind whether I was trying something funny. The center of Sohra was not full of tourists then.

The Rath of the Clan refused to budge from the parking place that it had found at the restaurant where we had lunch. So we decided to spend the last bit of the daylight hour walking around Shillong’s Police Bazaar. This crowded market was full of people and turned out to be quite a cheerful place. My attention was, as always, drawn to the fresh produce rather than the cheap factory made clothes heaped on the stalls of the bazaar.

There are very few of the picturesque old buildings left here, in the prime commercial location in Shillong. Among the many unlovely concrete piles I found one of the last remnants of the old style buildings that a long-time Shillong resident told me is called “Assam style”. Niece Mbili is studying to be an architect, and I stood with her, lost in admiration for this once-beautiful structure made in wood and corrugated metal sheets. Wood is not sustainable building material any longer, but this looked like it would be a wonderful place if only someone took care of it. 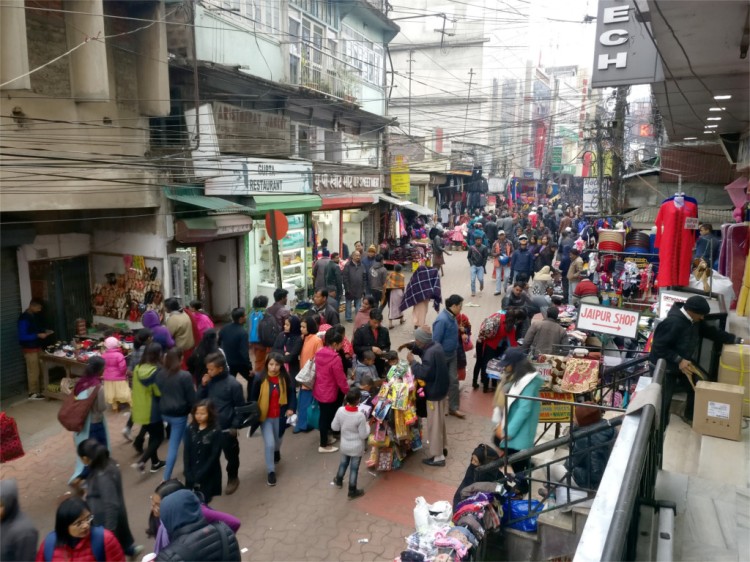 I loved the tangle of wires overhead so much that I climbed above them to take a photo from above. You can see the haphazard concrete buildings which have replaced the Assam-style houses that must have once lined these roads. Photos from the 1940s, 50s and 60s show these low houses and very few people, at least to our modern eyes. Today the narrow roads are filled with fashionably dressed urban young, tribal and non-tribal, looking to pick up something inexpensive. From this vantage I spotted the Gupta Restaurant where I had a nice pre-dinner snack.

But back to oranges. I’d missed this wonderful corner with the winter’s oranges and kiwi, so this photo comes from The Family’s camera (this post has a mixture of photos from the two of us). A couple of years ago, I saw kiwi orchards in nearby Arunachal Pradesh, and thought that the fruit had been imported recently. But now that I know that the Kiwi originates in China, I guess it must have come to this part of the country fairly long ago. Everything on display in these stalls is local: kiwis, bananas and oranges, certainly, but also the beautiful cane baskets. The Family thought it was good I hadn’t noticed them, because I might have tried to bring some of them back with me as cabin baggage. Maybe. Maybe packed with oranges! 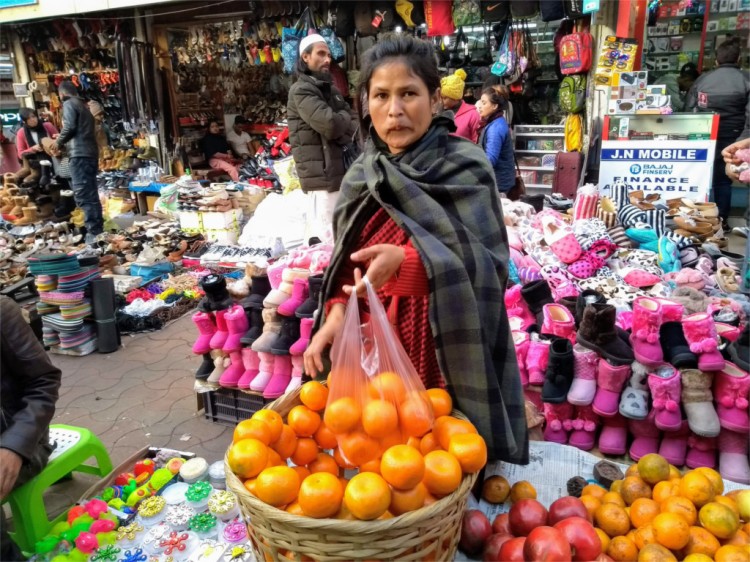 This lady did exactly that: packed one of those woven conical baskets with oranges. The large oranges in the basket were very sweet, but the smaller ones (slightly more green) had a better flavour. I didn’t try the apples. Don’t miss that heap of pink boots in the background. I’ve never seen so many pink boots together before. This must be special to Shillong.

You can tell The Family’s photos in this post by her concentration on the person rather than the produce. I’d passed the stall with the chilis but not paid much attention to the lady selling them. In retrospect, maybe I should have paid more attention to the people. Meghalaya has a mixture of ethnicities, and I could have learnt more about the state by looking and talking. At the very least I would have seen these pink jackets which go with those pink boots. Maybe I would have also taken a closer look at the loofahs behind her. 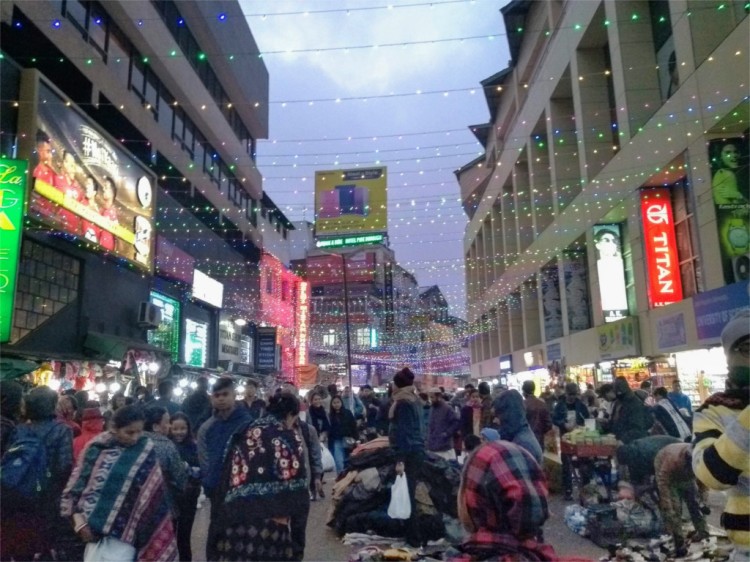 It was less than a week after the winter solstice, and the days were short. The light faded very quickly in Shillong at this time. The bazaar took on a very festive look with the fairy lights complementing lit up signboards. Our Rath driver (should he be called a charioteer?) had phoned in his decision to move, and we had to leave just when the evening’s crowds began to pour in.

What would you have for breakfast if you were on the road out of Jodhpur early in the morning? We stopped at one of the many eateries which were already open on the main road: Nai Sarak, to check out the options. First thing, a glass of milk with some saffron thrown in. You can see from the featured photo that it is thickened slightly. It has quite a clientele. I prefer a glassful of chai, but I didn’t mind taking a little sip of the local morning’s brew for the taste. That sip told me that quite a bit of sugar had also been thrown into the mix.

Milk and jalebis are a standard north-Indian breakfast combination. Sure enough, right next to the milk wallah was this jalebi man frying his jalebis. I love watching a person frying jalebis; the elegance of movement which produces these tight spirals is fascinating. The hot jalebis soak up the sugar syrup easily. Traditionally, the sugar has some saffron thrown into it for the colour. Wonderfully tasty stuff, but that oil is hydrogenated, as you can see in the large tin next to the karhai. I don’t have much of jalebi any more, but I did give in to temptation and had one. I had to squelch the temptation to have a second one very firmly.

Two sweets left my mouth too sweet. In Jodhpur the antidotes to an overdose of sweets are easily at hand. The shop had batter-fried chilis. We’d seen a man make them the previous evening (photo above). The Family asked for a hot one right out of the frier, but was told very firmly that they are meant to be eaten cold. We shared one in the morning. The big fat chilis are not very hot, but they are flavourful. They reminded me of the fried chilis we ate in Madrid. So that’s a good breakfast: two sweets, a large glassful of tea, and a fried chili. Just what we needed to set out on a long day’s drive into the desert.