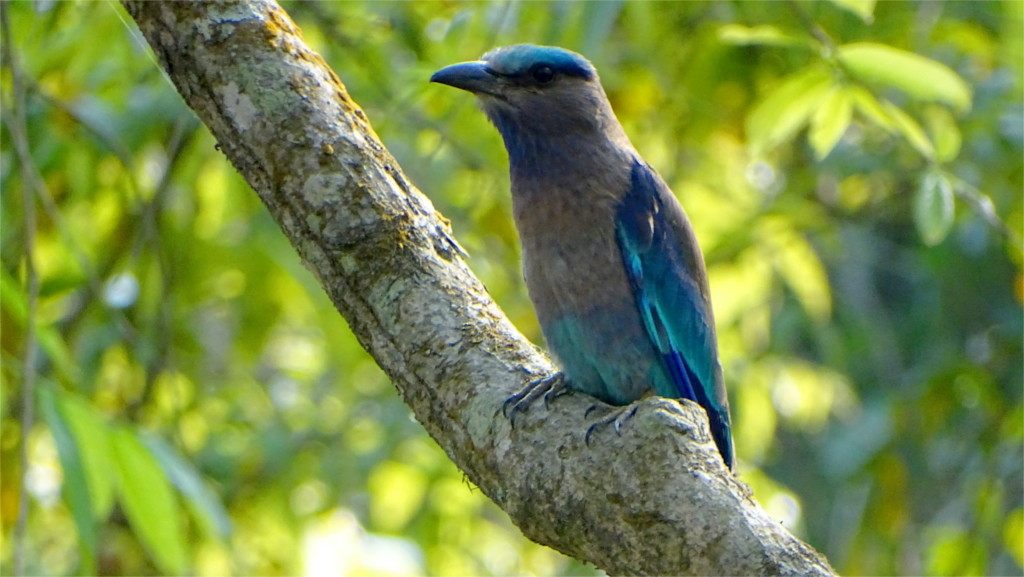 Wildlife watching is frustrating. There are times when the light is just brilliant, the air is particularly clear, and you can see tiny details on branches of far away trees; but there are no birds to be seen. This was such an unfortunate afternoon. We drove out into Kaziranga for our last outing of the trip. The Family was feeling a little ill, and decided to stay in bed. The morning’s haze had disappeared, and the air was cool. Golden light seemed to drip over the whole jungle. The only thing visible was the Indian roller (Coracias benghalensis) which you see in the featured photo.

The roller is a beautiful bird, but you can see it outside of cities very easily. Strangely, I don’t have a good photo, so I take every opportunity to take one. It had light behind it, and the tail was covered, but the colours came out pretty clearly. If it had decided to sit on the other side of the trail, then in the better light you would be able to see the lilac feathers in the throat more clearly. You need to peer at the photo rather closely to notice that there is a change in colour between the breast and neck. What you can see very clearly are the talons.

The bird sat quietly. It wasn’t interested in giving us a demonstration of the wonderful acrobatics which it gets its name from. We were in the middle of the breeding season, so perhaps it had found a mate. But there was no nest in sight. We moved on through the seemingly empty jungle. 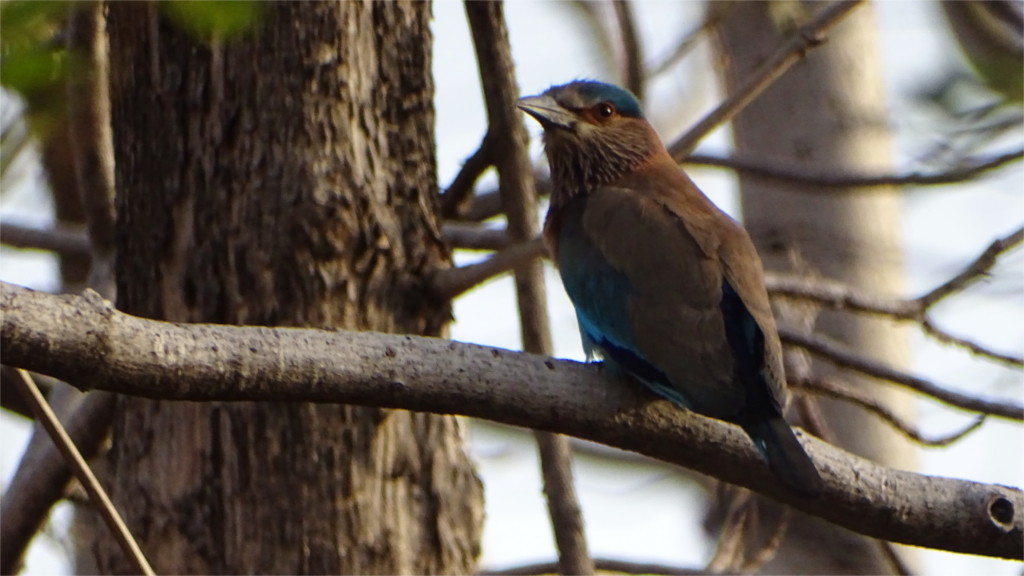 Several times in my forays into Pench National Park, I noticed a bright blue flash of wings at the edge of dusty meadows full of dried grass. If I’d seen this colour near a pond or soak, I would have thought of a kingfisher. But in this habitat it was the Indian roller bird, Coracias benghalensis. True to its name it twisted and rolled in soaring flight each time I saw one. The spectacular flight is a mating display; something that is visible during its breeding season, between March and July. Unfortunately, the camera I had with me compensates for its enormous zoom by an equally enormous shutter lag. This rules out taking photos of such displays.

In any case, I was at first very surprised to find a paper which reported that roller birds were observed to spend 90% of their time sitting, at all hours of the day. It seems that foraging and feeding took substantially less than 10% of its waking hours. Such a lucky bird!

The time spent foraging may depend on the kind of terrain the bird is seen in. In the agricultural land where the study was performed, rollers were found to eat insects almost exclusively. However, in the wild it is known to prefer lizards and frogs, and sometimes is even seen eating small snakes. The larger prey may keep the bird full for a longer time, but it may also change the amount of time spent foraging before it feeds.

On second thought, I should not have been very surprised when I found that the roller is a sedentary bird. After all, I have so many photos of a roller perched somewhere (the photos here are examples). 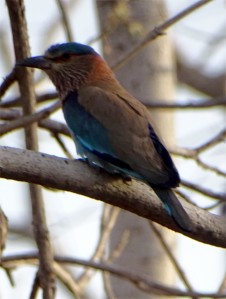 Once you get one in your viewfinder, you can go on taking photos to your heart’s content. With its wings closed it will seem to be largely reddish brown, with the blue colouring appearing only on the head, tail and part of the chest. In the 1930s, the Indian physicist C.V. Raman studied the blue colour of the roller’s wings and found that the colour was due to double scattering of light from the feathers of the bird, and not from a pigment. He moved on to study the blue colour of the sea, and won a Nobel prize for that work. Today, the nano-structures on the feathers of the roller that produce the colour are very well understood.

The Indian roller is not a threatened species. It is seen over all of India and south-east Asia, and westwards along the Arabian sea and the Gulf of Iran. Dedicated bird-watchers ignore sightings of the roller, and would roll their eyes if they saw me taking photos of one. But recent fossil finds suggest that about 30 million years ago its ancestors were spread even more widely across the world. Ancient climate changes then seem to have restricted the populations of roller birds to (roughly) their present geographical range. There are such wonderful histories behind every bird!