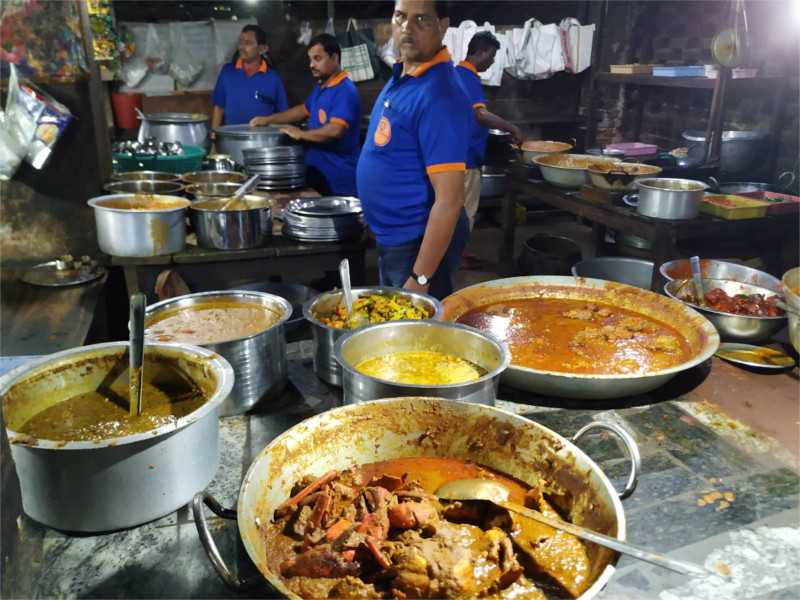 Many years ago, on our first visit to Chilika lake, we stopped at a small and unremarkable looking eatery on a side road. Our guide and driver was clearly looking forward to the meal. One of the three tables was occupied, and we parked ourselves on one under a tree in the little yard. The lobster and crab were the freshest I’d ever had, and cooked lightly and with a delicate touch. I went back on every visit to Odisha which took me near Chilika, and it remained wonderful. The single soft-spoken owner-cook-waiter was later joined by a couple of assistants to wait on tables, but the kitchen remained the exclusive domain of the old man.

In early March, on my last trip before the lockdown, I passed near Chilika again. This is a huge lake, with a surface area of over a thousand square kilometers. This time I was on the end near Berhampur, not Puri. But I was told that there was a Chilika dhaba nearby. Late in the evening we dropped off the highway and detoured into something quite different. This was one of the large productions which cater to busloads of tourists. 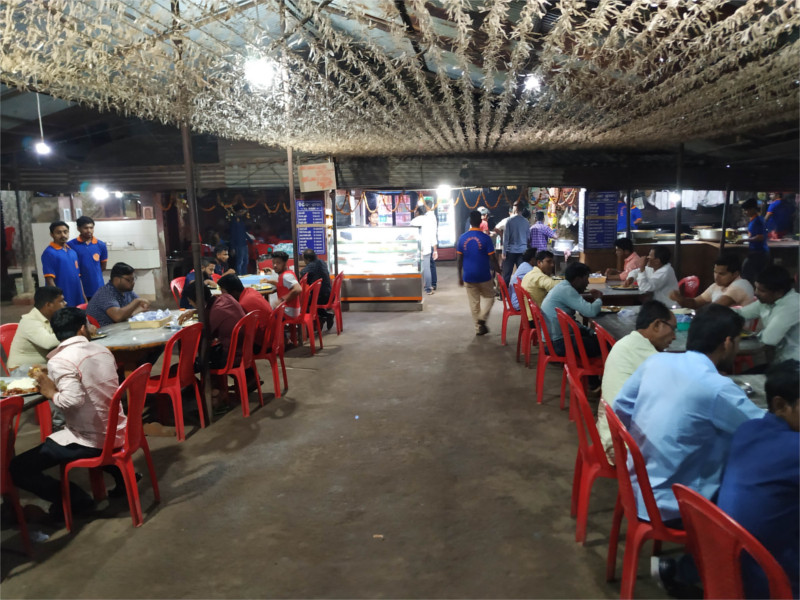 Fortunately, in rural Odisha, freshness is a fetish, as a result of which I’ve seldom had bad food on the roadside. The dhaba was out of lobster, but crab and two varieties of fish were available. We decided to share one of each thing on offer. The ingredients were as fresh as I’d expected; they can’t be otherwise next to one of the biggest fishing grounds in this part of India. Although the cooking was uninspired, the freshness of the crab was good enough to keep us plodding through the meal. I resolved to go back to the other dhaba as soon as possible. Now this is a promise to oneself which seems hard to keep. 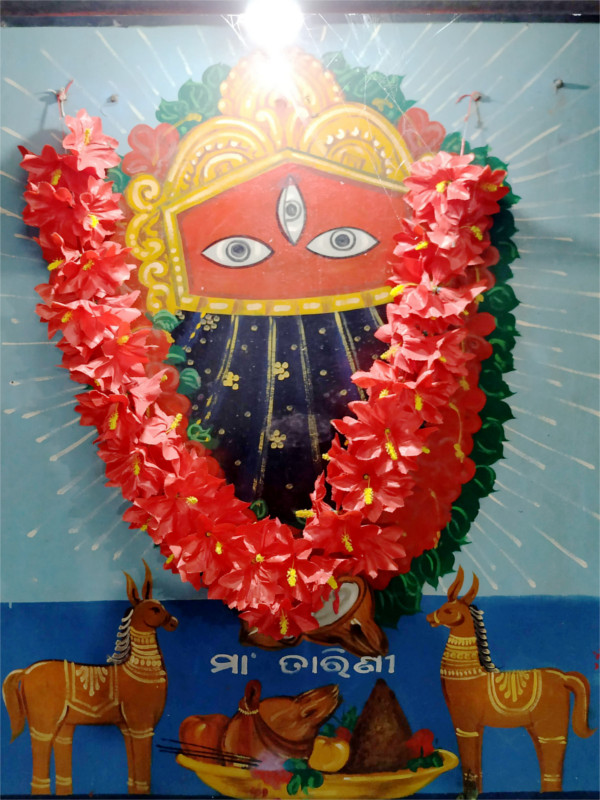 On the way out I passed this large image of Kali painted on one wall. I find the simplification of this image wonderful. In Odisha it is enough to draw the eyes to signify Kali, time, the goddess of death. Every other piece of this image is dispensable. The dhaba had emptied out, and it was time to hit the road again. Kali stared at us as we climbed into the car.

“Get it over with,” was The Family’s verdict. “Let’s go to the beach and sea the fishing nets.” The fishing nets were much less impressive than icons of tourism have any right to be, but just before you reach them is heaven. At least a cat’s version of heaven: a sea food market with all the wonderful catch from boats pulled up between the shore nets. Everything you want is there: lobsters, squid in its own ink, octopus, shark, shrimp, shark! 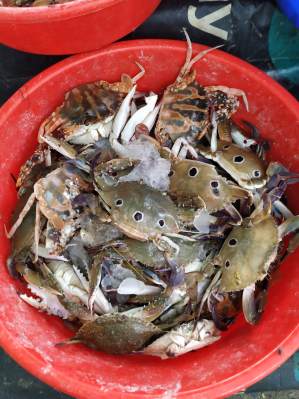 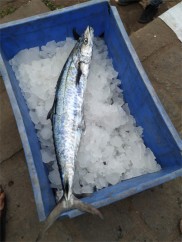 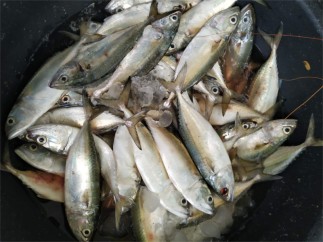 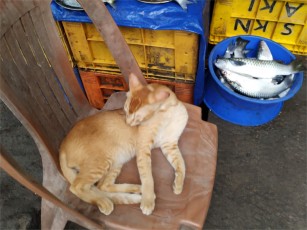 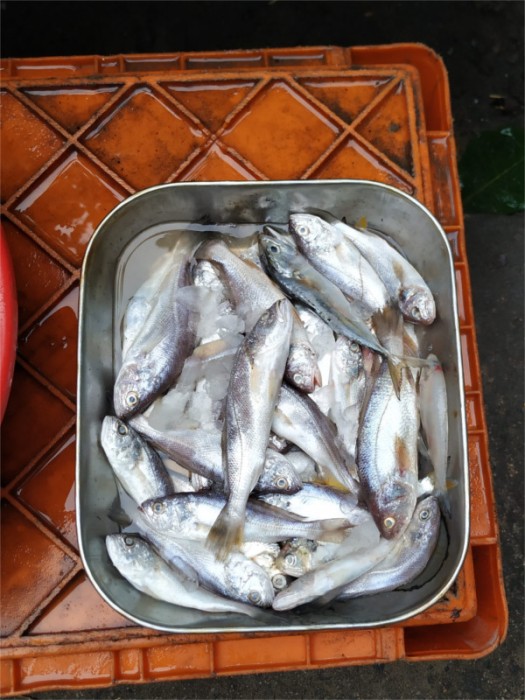 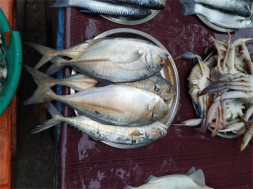 A large fraction of the people at the beach were examining the fish with interest, but it didn’t look like much was being sold. There was much I couldn’t recognize, so I sent off the album to my family, large parts of which have dedicated their lives to fish. After the clamour died down there were IDs for four varieties of fish: small pomfret, rays, blue runner and the pearl spot. The many varieties of edible marine arthropods that you see in these photos remain unidentified down to the species. Sea food fans, if you have any further IDs, please leave them in the comments to the photo. Otherwise just enjoy, like the cat in the chair.

After buying my train tickets I found that I was quite hungry. It was about 5 PM local time, but my body was probably still two and a half hours behind. Maybe it was a late lunch that I needed. The first day in China could be a little confusing for one’s metabolism. I’d eaten a large breakfast before catching my flight out of Shanghai, and then skipped lunch. Whatever the reason, I was famished, and there was a food street I could walk through. I looked at the various things on display and my eyes snagged on some seafood.

The shrimps with Szechuan peppers looked very inviting. What crab was that next to it? Not the Shanghai hairy crab, I thought when I looked at it closely. That would have been good, but I wouldn’t mind other crabs. Next to it was a trayful of large lobsters, cooked in Szechuan style. Some gestural language established that I could take a mixture of things, and pay by weight.

While buying the food it struck me that eating crab and lobster with chopsticks would be a challenge. Fortunately this is a challenge for the locals as well, so you get a bunch of plastic gloves as well. Between chopsticks and gloved hands it was not at all difficult to work my way through a bowlful of mixed seafood.