While I waited for bears inside a hide in the Daroji Bear Sanctuary, a ruddy mongoose (Herpestes smithii) put in an appearance. I’ve only had fleeting glimpses of this furtive creature before: I can tell its colour from that of the more common grey mongoose, and I know that failing everything, one can tell it by its black-tipped tail. It is one of several species of mongoose which are found in the forests of India. IUCN classes it as being of least concern for conservation action because of “presumed large population, and because it is unlikely to be declining at nearly the rate required to qualify for listing in a threatened category. The impacts of habitat loss and degradation and hunting on populations are not precisely known…” (the emphases are mine). Given the great boom in wildlife tourism in India, I’m surprised that there is so little support for wildlife science. There is neither money nor manpower to make estimates of the number of these animals left in our shrinking jungles. In general, small carnivores of India are barely studied.

This was the best opportunity that I’ve had to look at the behaviour of the ruddy mongoose in the wild. It seems to forage with its attention close to the ground in front of it, as you can see in the little video clip here. It spent a long time in hiding under a large boulder before it stepped into the open. I could not see it, and do not know whether it scanned a large area before setting out on a foraging trip. It has good vision and hearing, and perhaps a good sense of smell too. It dug between boulders and found things to eat. Going by the places it picked food from, it was eating small things, perhaps insects, perhaps organic matter trapped in little fissures in the granite. I wish I knew.

A ten year old phylogenetic study by six scientists from France and New Zealand concluded that mongooses differentiated about 22 million years ago, and the Asian species diverged from the rest about 15 million years ago. Genetic studies can be carried out from a very few specimens. Field studies require money and manpower. There doesn’t seem to be a consensus on the life expectancy of a ruddy mongoose in the wild, no study of breeding seasons and litter size (the IUCN site claims that sexual maturity is reached between the ages of 4 and 5 years), no consensus about whether it is diurnal or nocturnal (I’ve only ever seen it during the day), its diet is unknown, its main predators are not known. It is a cipher.

When a pair of painted spurfowl (Galloperdix lunulata) emerged warily at the edge of the clearing in front of my hide, it was a lifer. I’d never seen these gamebirds before. The brightly coloured male with its spotted plumage, and the somewhat muted colours of the female were completely new to me. I noticed the wicked spurs on the legs. What are they used for? To battle other males for territory and breeding rights? Typically species with sexual dimorphism of this kind are not monogamous, although an authoritative book from 1928 is often quoted in evidence of monogamy. The pair advanced to the middle of the open area in front of my hide, pecking constantly at the ground. They eat seeds, grains, berries, tubers, and insects. 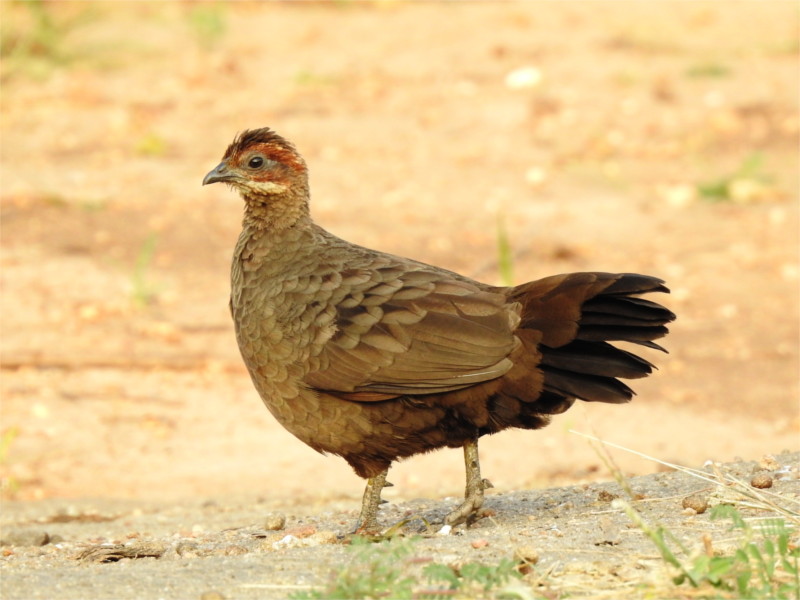 Another pair slunk through the grass and bushes behind, and the male jumped on to a big rock, (featured photo) leaving the female behind. That was a remarkable leap, and I wondered why it didn’t flap its wings at all to get some lift. Other jungle fowls do an ungainly flutter now and then, but apparently not the painted spurfowl. It would rather run fast than fly. A lone female ran about in the dust ahead of me, stopping to peck every now and then.

The painted spurfowl is found everywhere on the plains of India, and breeds from late winter to the beginning of the monsoon. The male shares in the rearing of the chicks, again unusual given the flamboyant colouring of the male. Given that it’s so widespread, I wonder why I haven’t seen it before. I asked The Family, and it turned out that she has seen it before, on a trip on which I didn’t go. So have I seen it earlier, or not?

When I was a child, door to door vendors would sometimes arrive at our house with Grey Francolin (Francolinus pondicerianus, तीतर) in large baskets. This was a very special treat, like quail. For a brief while these game birds were farmed. In the 80s there was a specialty shop near the Taj in Mumbai which stocked game birds including तीतर (teetar). With the increasing industrialization of food, and the homogenization of tastes that followed, these farms either shut down or turned to battery farming of chicken. As a result my memories of game birds had faded over the years.

Sitting in a hide inside Daroji Bear Sanctuary, one of the first things I saw was a bunch of these game birds pecking their way silently across the rocks. These birds are found right across the plains of India and Pakistan, and in the coastal areas of Iran, north of the Gulf of Oman. The IUCN red list classifies as of least concern for conservation. The plains of India are heavily urbanized, so this seemed a little odd to me, until I realized that their habitat are these rocky and barren scrublands, which are of least concern to developers, at least for now.

From another hide the next morning I saw more them pecking at grains left as lure. There are some species of birds and animals, which, although widespread, have extremely low genetic diverstiy. They need special conservation effort. Given the long history of domestication of तीतर, I wondered about this. I found later that the genetics of the Grey Francolin has been studied mainly in one population in central Pakistan. This population shows high genetic diversity. If this can be verified in other populations across the range of this bird, then it would be further reason to believe that the Grey Francolin is one of the lucky species not to need special protection from us.

I leave you with a video of these birds which were once a common sight in cities, but which you now have to travel far to see.

The Daroji Bear Sanctuary near Hospet in Karnataka turned out to be a wonderful place to see sloth bears (Melursus ursinus). I’d never noticed the long sickle shaped claws and sharp teeth in such detail before. Their long and curved claws led to their mis-classification as sloths in the 18th century, hence their “common” name. There is nothing sluggish about them. Bears being the secretive animals they normally are, I don’t expect to see their behaviour in so much detail elsewhere.

A mother and child made an appearance on the hillside first. The cub was old enough to pad along with its mother, exploring around its mother’s path. Cubs remain with their mothers until they are two years old. In this part of the country they are born in winter, so this one was probably not more than a year old.

I always wonder why the bears have this thick coat. The sloth bear evolved in the Deccan plateau, the same region where I was now watching them, perhaps less than 5 million years ago. This is a period during which the weather cooled on the average, and forests were replaced by grasslands and scrublands. On the other hand, the monsoon had already set in, so the interior of India would perhaps been dry and warm when it was not wet and warm. As I watched the mother and child feeding, I wondered how they could stand the weather.

A solitary juvenile made an appearance without upsetting the mother and cub. I’d always thought of sloth bears as solitary creatures, so this was a little surprising to me. These bears become sexually active at about the age of three, so there is a year when they have left their mother but are not seeking mates. The new beasr approached quite close to the cub without the mother being perturbed. I wondered whether the adult female was the mother of this juvenile, but there was no way to tell. 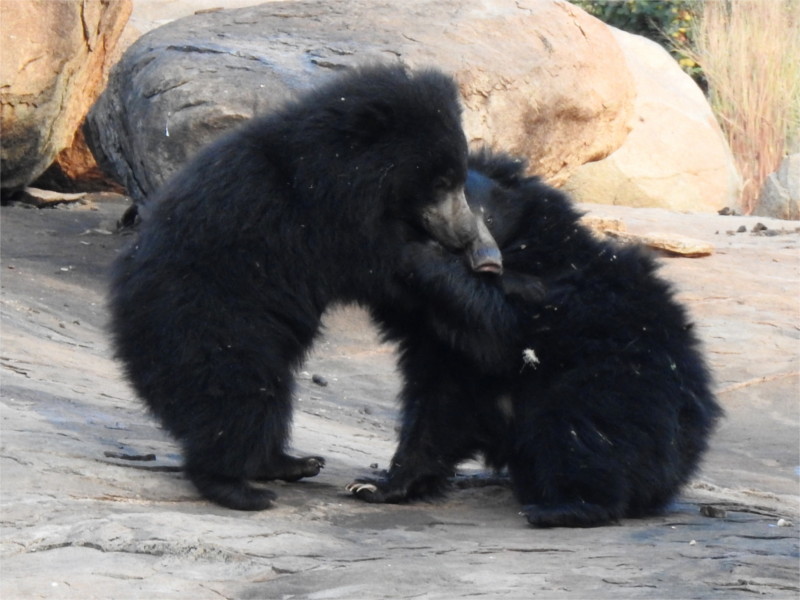 After a while another adult and a cub appeared. The two cubs started playing together without the adults becoming aggressive. This was a complete surprise to me. Cubs of sloth bears remain with mothers; the father does not play a role in rearing the cubs. So this was not a family group; it was two different families, and a third juvenile, perhaps an older offspring of one of the two adult females. I have no idea whether such groups have been recorded.

There is a lot of literature on the foraging and feeding behaviour of sloth bears, but assemblies of so many of them in one place is not mentioned. Is it so common that no one remarks on it? Unlikely, since some sources remark about their solitary habits. Has the small size of this sanctuary changed their behaviour? Possible, since territorial behaviour is not mentioned in any article on sloth bears. It would be interesting to see whether any field scientists are studying this population of bears. 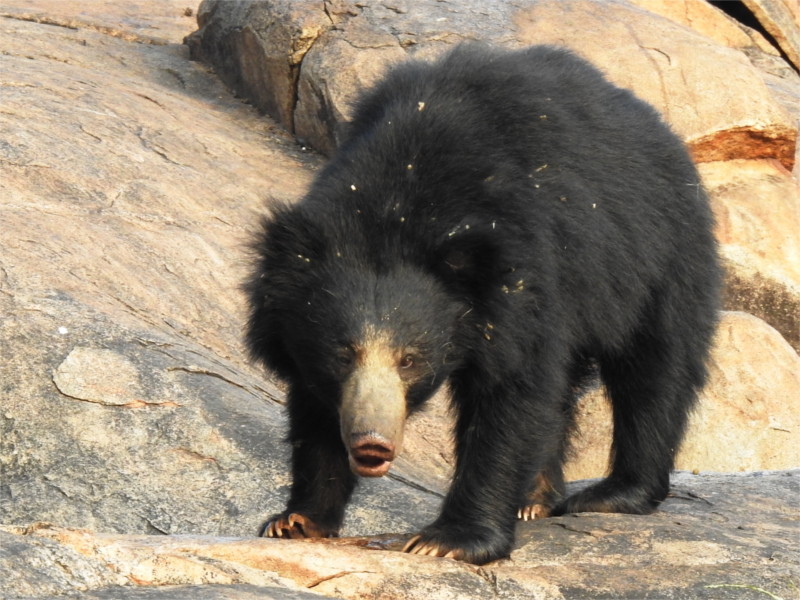 Sloth bears (Melursus ursinus) are secretive animals. The Family and I have been doing wildlife trips in India for around fifteen years, but in all these years the number of photos of bears I’ve got can be counted on the fingers. When we heard about the Daroji Bear Sanctuary near Hospet in Karnataka, we were ready to go. This is a small reserve by any standards, only about 8.3 square Kilometers in area, but an important one for the preservation of bears. This landscape would have had a large population of bears historically. As the land began to fill up with farms, the need for a sanctuary became clear, and Daroji was notified 25 years ago.

One wonderful thing in this place is a hide. We got permission to drive into a parking lot inside the sanctuary one afternoon, and then were conducted to the hide by two park rangers. The hide faced a clearing beyond which was a small hillock and a meadow with a water hole. The ground here was teeming with termites, which the bears love to eat.

The bears made an appearance as the sunlight began to pick up a slight golden tinge. I quickly realized that they were not bothered by us sitting inside the hide. It was a great opportunity to take videos of their behaviour. This one shows a mother with a cub and another juvenile. One of them digs into a termite mound, getting the insects all over its paws, and then falls back to lick them off. If this makes you think of bears as jokers, then let the video play. When the mother senses some danger to the cubs (and a peacock calls somewhere nearby) she rears up on her legs and gets ready to charge. You wouldn’t want to be in the way.

In spite of the discomfort of about six of us crowded into a small hide full of mosquitoes, this was an experience I’m happy to have gone through. I doubt that I will ever get a better view of sloth bears.