As we begin to plan our winter travel in the middle of a patchwork of restrictions and uncertainty, I came to photos of a Winter Solstice trip to a little known attraction in Gujarat. The small town of Kapadvanj, 65 Kms due east of Ahmedabad, was once an important link in the textile trade out of Cambay port, and specialized in mirror-work embroidered cloth. During its period of prosperity, the Dawoodi Bohra community built wonderful wooden buildings. Although most of them were converted to hybrid material over the centuries, a few still stand. We spent two days in this place, entranced by the exuberance of the local architecture.

Kapadvanj is a town of verticals; small plots were built over as prosperity increased, and the only way to go was up. Most buildings are now three or four floors high. The exteriors are idiosyncratic mixtures of styles: beautiful traditional woodwork coexists with intricately carved pseudo-Corinthian capitals. Inside, the layout is a vertical development of the traditional internal courtyard surrounded by corridors leading to rooms. The courtyard becomes a tall atrium, lined with galleries connecting rooms across the opening. Steep wooden stairs connect floors. Most families left for Mumbai in the 19th century CE, and maintain their holdings sporadically. I saw beautifully painted facades, cheek by jowl with others which have fallen into near ruin (the earthquake of 2001 did its bit for entropy). Sometime, I should go back to look at the place more closely.

On a little walk through the old town of Jamnagar, I passed through a triple gate on an arterial road and then suddenly saw some wonderful old doors. Where was I? What was I seeing? The maps on my phone were of no help, and later I found that the famed world wide web was also of no help. All these doors belonged to a grand and ornate but delapidated structure. It was not marked on the map at all, although shops which were set inside some of these doors were mentioned.

The facade was perhaps less than half a kilometer long, but not too much less. I walked along it, bemused. A ceremonial gateway, fit for a four-horse coach was barred by a flimsy mild steel collapsible gate. Children passed through it, and there were scooters parked inside (and outside, of course). Mysterious. I was enchanted by the grand arches, the painted columns, and wished that the shops had harmonized better with the building. The building looked like it came from the last decade of the 19th century CE, or perhaps the first couple of decades of the 20th.

Some of the doors were shuttered, instead of being covered up for a shop. Expansive stairs led down from the level of the floor to the street. These regal stairs were no places for people to sit. I took a photo, trying to avoid the scooters. I lost the stairs (photo above) but not the scooters; a mirror jutting up from the handlebars reached up into the frame. A few more paces I came to the geometrical middle of the facade, and I had a name: Saifee Institution (see the featured photo). Now I could place it; it was a Dawoodi Bohra institution

I seemed to have come to the shop where The Family had told me she was going to spend quality time looking for the local tie-and-dye fabric. I was happy to leave the warm and humid winter atmosphere of the street and walk into a frigidly air conditioned shop. Surprise! The shop belonged to a Bohra. As The Family engaged an assistant in helping her to choose, I asked the owner what the Saifee Institution was. He told me that it used to be a big school, and even now it remains a school, although the number of pupils is much smaller. That explained the children walking in through the gateway. 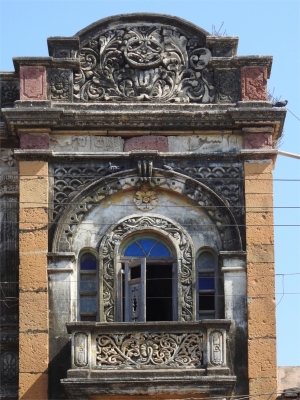 I left my backpack with The Family and walked back out on the road to admire the building again. Those classrooms then! The corridors would have been wonderful places to run down. And the rooms! So many windows to look out of when you were bored. I could have liked studying in this building. The stucco work on the pediments was so wonderfully decorative. Unfortunately I could not find anything on the net about this building or its provenance.

I could really dive into the details here: admiring the repeating decagonal tiling on the jalis, or the execution of plaster flowers. This was one of my most pleasant discoveries in this town, and fortunately I had a long time to admire it. It’ll take me much longer to dig out its true and compleat history.