At the point where you come to one end of the tidal creek in Bhandup the water is absolutely stagnant. Not even a normal high tide lifts the water enough for waves. This fetid water turned out to be a place where mosquitos breed in swarms. I had covered myself in anti-mosquito gel, but that was not enough to keep away these pests. They swarmed over me, even settling on my sturdy and loose trousers! Was it worth it? The only birds I’d seen on this stretch were sparrows, cormorants and bulbuls. These were not worth it. But a couple of other birdwatchers were coming back from further up this path with puzzled looks. “Do you know what this could be?” they asked showing a photo one had just clicked. To me it looked like a longer sparrow, maybe a thrush. But J. Multiflorum asked “Could it be a wryneck?”

Since I knew nothing of wrynecks, I couldn’t find any reason why it should not be. At precisely the point where the density of mosquitos was highest, next to a dry tree was another pair of birders with the same puzzled look, “What could this be?” The tree was bare. “It keeps coming back,” they said, as they helpfully gave us another tube of anti-mosquito lotion. Sure enough it was back soon, and I took a couple of photos of the bird in silhouette. A little larger than a sparrow, but quite a different bird. It hopped on to the ground and began pecking away. I managed to take a couple of photos in which it had its head up. Definitely not a sparrow, the colours were much more interesting. It was the Eurasian wryneck (Jynx torquilla).

Later I found that it is in the same family as woodpeckers, Picidae. It nests in northern Europe and migrates to Africa or India in winter; the only woodpecker which migrates so far. Unlike most waterbirds which migrate in large flocks, the wryneck migrates in little groups. I did not see it foraging on a tree, which it apparently does in a manner similar to woodpeckers, with its tail held rigidly to the trunk. Unlike a woodpecker, it slurps insects from the surface of the bark. I was happy with this sighting. I’d literally paid for it with my blood!

A city as crowded as Mumbai has barely enough space for people. When houses are needed, swamps and mangroves are easily filled in. When parking space is in short supply, green spaces will be even harder to come by. It is natural that human institutions, when unchecked, will satisfy human needs above all. As a result, birds are pushed to the periphery of the city. These are the spaces that no one likes to go to. 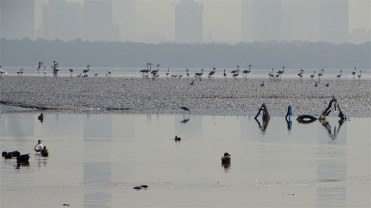 Waders and water birds in the backwaters of Mumbai 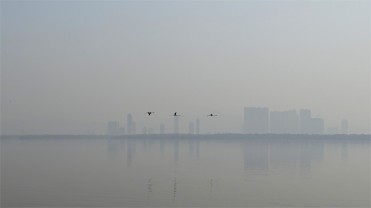 Flamingos over the city

A long-tailed shrike (Lanius schach) against the apartments of Mumbai 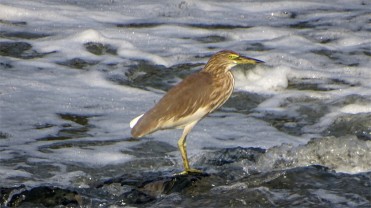 An Indian pond heron (Ardeola grayii) in water with detergent 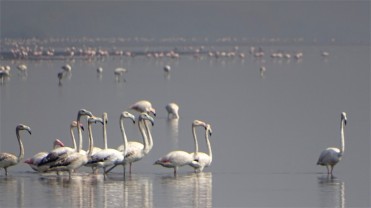 Flamingos in the backwaters of Mumbai 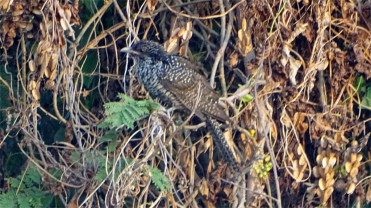 If you are not going out of the city on a weekend, you might join other enthusiasts for a boat ride in the backwaters of Mumbai. The city has turned its back to these waters long ago. They are shallow tidal creeks which are not of much use to ships and trade, and the hunger for apartment blocks has not grown so acute that they need to be filled in. The refuse of the city washes in here: plastic and other garbage, chemical pollutants. The sea breeze does not disperse the smog, so the backwaters are perpetually hazy. In spite of this, life finds a toe hold. I drifted through these parts of Mumbai yesterday with The Family and friends and came back with photos which show that birds still survive just outside human spaces.