Mistakes I should stop making: number one. Do not take a whole class of plants to be a single species. When people say fern, I don’t instantly think of them as being as diverse as the group of flowering plants. But that’s what they are. Ferns make up the class called Polypodiosida. They have more than 390 million years of evolution behind them, and enough time to find many different ecological niches to occupy. The result is that their forms vary a lot.

The spores are borne on leaves, and their beautiful shapes have evolved to give the spores a good chance of wafting away in breezes. The beautiful shapes of leaves and leaf buds are perfect for black and white photography. These are just a few species that I found growing in meadows in the Sahyadris this monsoon. The hill slopes are great places for them. Unfortunately, they do not yet gather much attention, so there is a very large hole which the first field guide can fill.

We took an hour’s walk inside Binsar National Park, a short climb to its highest point. This Zero Point, as it is called is at an altitude of just over 2400 meters. The cool air at this height smelt clean, with a flavour of green trees. The view at the top showed smoky valleys, and the high Himalayas were almost invisible because of the haze. But just around this part of the park the winds and the cool heights had together managed to confine the smoke below. I’m sure that the air here is usually much cleaner, but at that time it still felt better than city air. The walk through an oak forest was wonderful, and a great change from sitting inside a car all day. At this height you get Himalayan white oak (Quercus leucotrichophora), easily identified by the fact that the oval leaves with serrated edges are white on the reverse. The dry tree fern that you see in the featured photo is just one of many things which grow on oaks.

Coming back to our hotel, we felt the change in the air. Warmer, of course, now that we were half a kilometer lower, and also more haze. Fortunately there was no smell of smoke in the immediate vicinity. We were told that a short shower the previous day had put out fires locally, and cleared the haze a little. I admired a red sunset as I walked up the steep forested path from the road to the hotel. Pollution gives you interesting sunsets.

The Sullen Celt and I had independently read about the Ogyen Chholing museum in Tang village. In our drives through Bumthang, we arrived in this village to look for the museum. This was a repeat of our experience in Ura: we never found anyone to talk to and we didn’t even find the museum.

Dinesh didn’t know anything about this museum. He came to a halt in the middle of the village. We stood undecided until The Sullen Celt pointed at a group of buildings across the fields on a small rise and declared that those must be the museum. There was no way to drive there. One of the others raised a feeble protest, "There should be a road to a museum." "Why waste time looking for a road? We can walk there", argued The Sullen Celt.

The first barrier was a wide pool of mud on the side of the road. I saw a butterfly mud pooling there, and took a photo. It is probably the Common Yellow Swallowtail (Papilio machaon). I’d not seen it before, and probably never saw it later, since this is the only photo I have of it. In the northeastern Himalayas it is only found at a height of above 3000 meters. The description "common" is perhaps misplaced for this butterfly.

I’d already noticed that small villages in Bhutan have makeshift drainage. Drains spill into low-lying fields. In climbing towards the ridge we had to pass through some of these sodden, and not too clean, fields. We tried to stick to trodden paths as far as possible, but I was surprised by the variety of flies we saw. The blue-bottle flies (photo above) were as common as in India, but they seemed larger. (I realize only now that I have taken a self portrait in the body of the fly.) In a flowering bush I seemed to see movement, but it took a while before my eyes could focus on the well-camouflaged flies which were pollinating the flowers (featured photo). 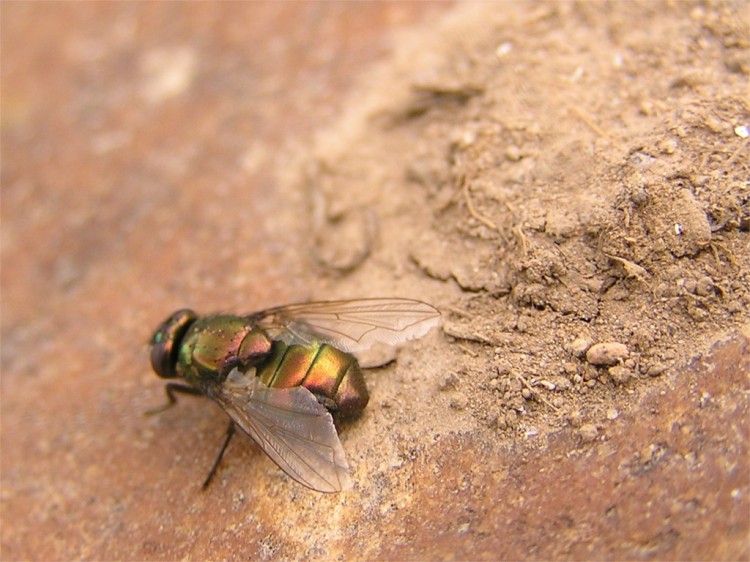 When I saw this copper coloured fly resting on a muddy red stone, my day was done. I knew I would get a tremendous photo out of it. The Sullen Celt was a trekker and she’d missed walking in the last few days. We realized that barging up a ridge was not the simplest way of getting to the museum, but just walking. We did not try to keep up. The Joy and his parent were lost in spotting birds.

The Family watched the village and the huts with interest, while I photographed flies.

So she saw this grisly scarecrow before I did. Both of us are city slickers. When we get away, we are usually in forests. We seldom walk through villages. So we were quite taken aback by this sight. Later we were told that this kind of a scarecrow is common enough, not only in Bhutan, but also in India. I wonder whether it works. Behind the carcass you can see a pile of chopped wood. Are they piled up for use in winter? It seems a little early to start stocking up for winter in the spring, so I guess it has a different use. Also visible is part of the fretwork on buildings. We saw village houses later which had even more intricate fretwork.

The Bhutanese keep their homes well.

Even along the unfortunate route we had chosen, there were the same beautiful wild flowers which we had seen elsewhere. The Family and I stopped to look at this fern unfolding. It had broken through the lacy covering of the parent shoot as it budded, and now was an elegant unfolding spiral. Was this the kind which was made into a wonderful curry by the Bhutanese? We were not sure.

I saw a butterfly sailing above a little wall of mud next to the path.

I clambered up it, and found it basking in the sun. It was a Painted Lady, Vanessa cardui, one of the commonest of butterflies. It seems that this Lady can be found on all the continents in the world except Antarctica. Maybe, the way the world is going, in a hundred years the Antarctic will see its first flowers being pollinated by a Painted Lady.

Soon we saw The Sullen Celt coming back. She’d reached the top of the ridge and found that the museum was not there. We turned back, and drove around the village for a while. There were no signs, and no people. We were defeated, but we had a great day.

Now, almost a decade later, the museum has a website, and it should be easier to find. Perhaps we will go back. Bhutan’s Bumthang district is beautiful enough.