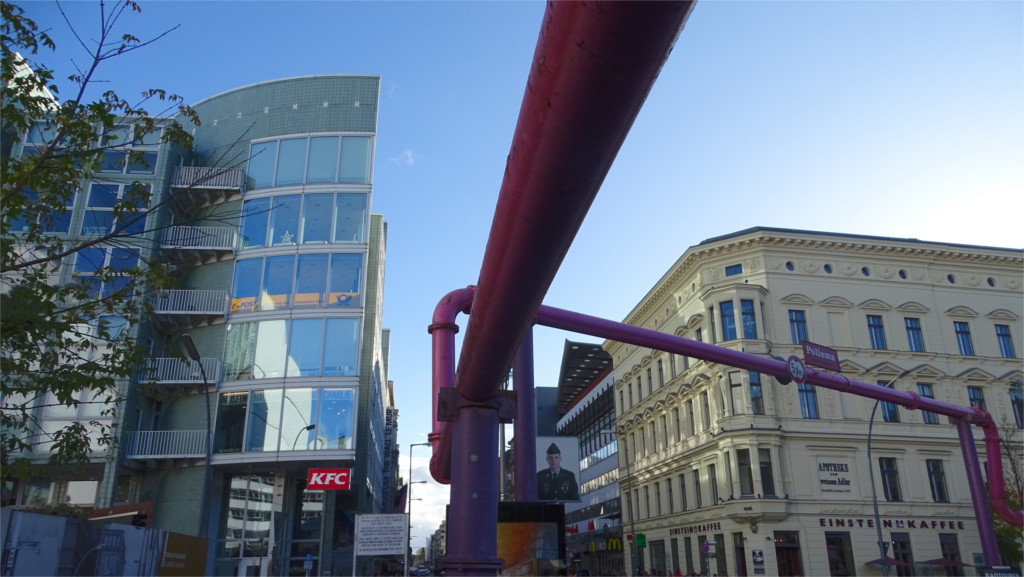 The Family had followed the cold war at a distance. Now, she was busy reading at the wall of history which lines Friedrichstrasse as you approach the site of Checkpoint Charlie from what once was East Germany. This spot is a condensation of that chilly history. If you have lived through those years, even at a distance, your eyes will not be caught by the tourist trap of fake military memorabilia, crumbling pieces of concrete sold as part of the True Wall, or the creperie, KFC and MacDonald’s which are signs of something which was once called the end of history.

While The Family viewed history through the posters which line the road, I fancied that I saw it in the pair (father and son?) in the photo above. The older man looks like he would be old enough to have similar memories of the cold war and its end. The younger one has grown up in a world with new problems. I hope that these also come to a clean end.

As I looked around me, I saw art projects all around. Berlin is built on sand. The water of the Spree percolates into the sandy soil beneath the city and has to be pumped out constantly. The pink pipes which you see in the featured photo carry this water. You could call it an art project, but Berliners think of it as just background.

The building with the funny roof was certainly a much-talked-about architectural project of the late 80s, called by the astoundingly inventive name Checkpoint Charlie Apartments. The design team included Rem Koolhaas, Elia Zenghelis and Matthias Sauerbruch. The civil engineer associated with this project was the famous Stefan Polonyi, whose students are even now changing the shapes of structures in Germany. The building on the left was designed by Peter Eisenmann (who also designed the Memorial to the Murdered Jews) as a residential building at the same time.

The art installation really stands out in the middle of the road. It is the light box, of which you see one side in these photos. The face that looks out to the former East Berlin is of an American solider. Looking towards the former West Berlin is the face of a Russian soldier. Both photos were taken in 1994, just before the troops from these two countries finally left Berlin. This is an untitled work by Frank Thiel, commissioned in 1998 by Berlin’s Development Commission.