I had time before catching my train. I sat down in the cavernous central hall of Paris Gare Montparnasse for a petit dejeuner. It was not to be complet, because a bunch of fearless sparrows descended on my croissant and picked it to pieces. It was a small price to pay for the photos. These Parisian Passer domesticus were perhaps the most fearless that I have seen, although I’d grown up watching sparrows steal grains of rice from my grandmother as she cleaned it for lunch.

I remembered these photos when I read a report about the genetic mutations which separate P. domesticus from its nearest cousins. The comparison of genomes of different species of sparrows showed two kinds of mutations: one which affects gross structure, and a subtle biochemical change. About 11,000 years ago, about when humans were busy inventing agriculture, the domestic sparrow separated out from its nearest cousins by changing its skull shape to give its beak the power to break the hard-to-shatter grains which humans were developing. At the same time, it developed the ability to digest starches, just as dogs did. 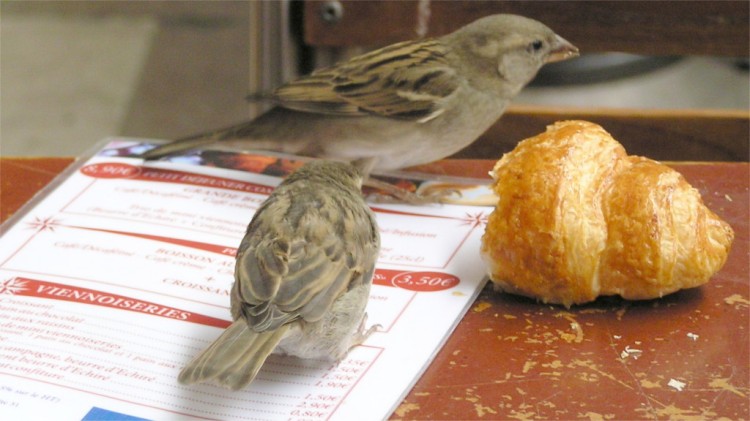 The house sparrow is not a domesticated species. It is a wild animal which has learnt to live around humans, like the peacock. And now we are beginning to learn how deeply we have changed the living world around us.