A bend in the river Mara lay a little way down from the hotel that we were in. This part of the Maasai Mara Game Reserve was called the Mara Triangle, and lay pretty far from the main entrance to the reserve. We arrived in the middle of the afternoon, and left for a game drive soon after lunch.

Although we spent a long time waiting for wildebeest to cross the river, an iconic sight, we managed to see quite a variety of wildlife that afternoon. The slideshow above has a selection of what we saw: from butterflies to lions.

Giraffes really stand out on the plains of East Africa. From the distance their spindly legs and slightly-bent-forward necks make them loom over the horizon like distant oil pumps busy sucking petroleum out of the earth. But what a difference when you get close! You see the elegant neck, the long nostrils, the hooded eyes and the long lips which grasp and strip leaves from branches of thorny acacia trees. 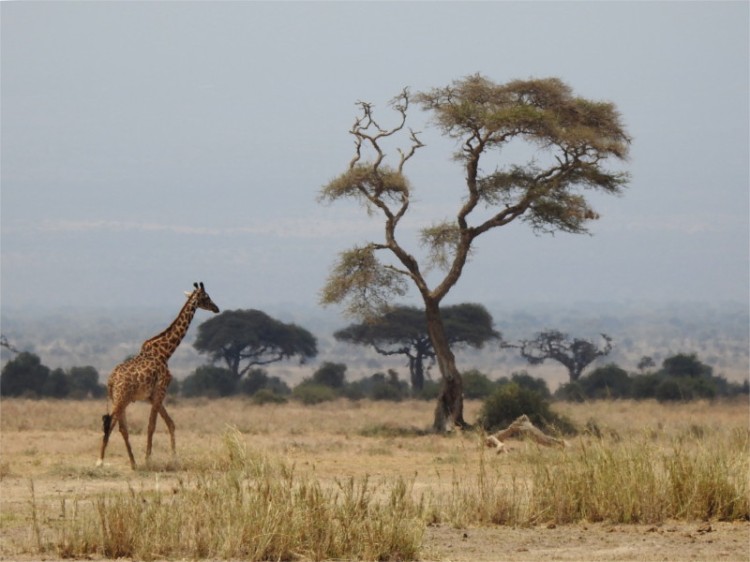 I was busy taking another copycat photo of a lone acacia tree on the East African plains, with a giraffe walking towards it. I peered intently at the faint line of white above the horizon. The Family had pointed it out earlier, while I was busy looking at other things. Was it a line of distant mountains? Probably not, I concluded. If the weather had been clear enough for a sight of Kilimanjaro, it would have been in a different direction. Also, nothing around it was high enough to be clad in snow. Probably clouds, I thought. While I was busy with this, MONT and The Family had discovered a group of Masai giraffe (Giraffa camelopardalis tippelskirchii). One could tell by the fact that the dark patches on their flanks were star shaped and grew lighter from the middle outwards, and they proceeded most of the way down their legs. FONT counted six. The Family repeated the count and found seven. MONT counted again and found nine. There were actually nine that we could see, apart from the lone animal which I’d been photographing on the other side of the road. 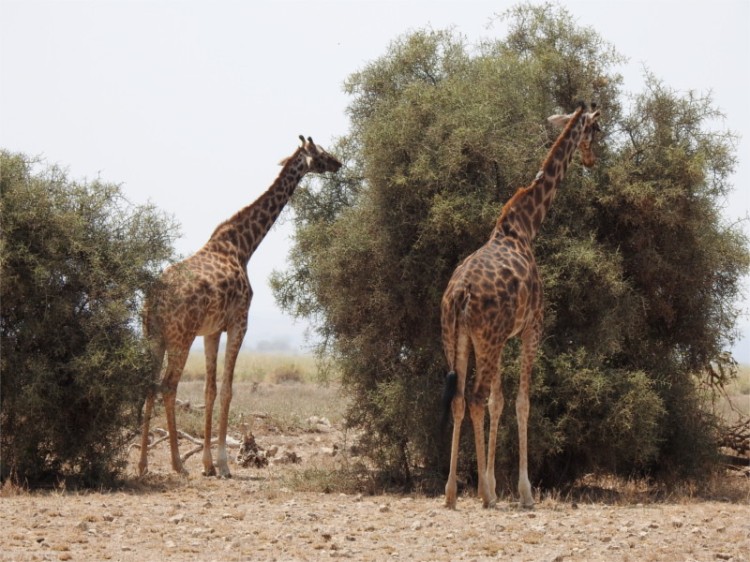 I’d read somewhere that male Masai giraffe eat twigs from the top of a tree, whereas the female prefers the lower branches. I couldn’t see any such clear difference between the individuals. So were they all male? It seems there is another way to tell the sexes apart. A male’s mane stops before it reaches the head, whereas the female’s continues so that the head is covered. This group was all male. I was to find later that giraffe herds can be all male, largely female and calves, or mixed, and the composition of the herd is not fixed. So, while giraffes socialize, they are not as social as elephants, hyenas, or apes. This group seemed comfortable with each other, and browsed together as long as we watched, without seeming to communicate.