The island continent of India drifted for 70 million years through the Tethys Ocean. It separated from Gondwanaland about 120 million years ago and collided with the Eurasian continent around 50 million years ago. 70 million years is enough time for large families of animals to evolve and die. So there must have been families which arose in the Indian landmass and migrated to the rest of the world later. The first such family has now been identified.

These are the Cambaytheres, a genus of fossil animals found at the bottom of an open-cast lignite mine outside of Surat in Gujarat. These 57 million years old fossils seem to be the origin from which all modern even-toed ungulates radiated out. These include horses and zebras, tapirs, as well as rhinoceros. The Cambaytheres were first described in an article published 6 years ago but I read about it only recently from a monograph published this year. The Cambay shale deposits have also yielded a very rich variety of other fossils from those times, and I’m sure we’ll be reading more about new finds from them.

The monograph has a very clear statement that although the genus is not the direct ancestor to any extant even-toed ungulate, it is the best possibility for the last common ancestor of all of them. Previous claims to the origins of this family are based on fragmentary fossil remains, or, sometimes, on conjectural remains. By the early years of the 21st century the possibility that the ancestors of horses originate in the Americas, Europe, and Africa had already begun to seem remote. A lot of attention then focused on new findings in China. Now, with a large collection of remains, from three species of this genus, much more can be said. Mysteries which remain are the routes through which the animals dispersed across the world, and then radiated into a large number of species in a few tens of thousands of years. 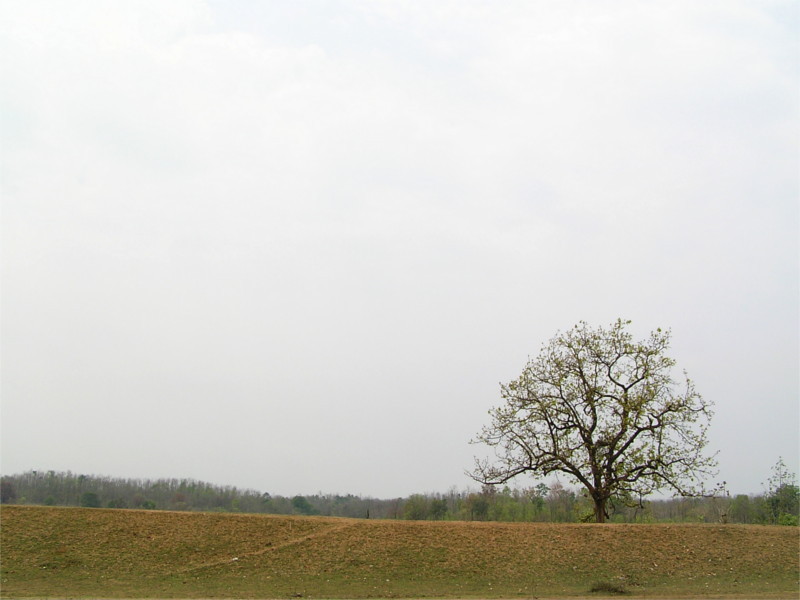 We walked a short distance through the seemingly inhospitable terrain near the border between Madhya Pradesh and Maharashtra. This was in the spring of 2006, on our first visit to Pench National Park. In medieval times this was the kingdom of the Gonds. The five century long history of the Gond rajas came to an end in the 18th century CE, when the Maratha armies captured their kingdom. The Gond state was completely demolished, and in present times we know these people only as a rural population of subsistence farmers. The only memory of that large kingdom is the name Gondwana by which the region is still known, and which was back-propagated by geologists to give a name to the southern part of the continent of Pangaea which formed 300 million years ago, of which the local rocks are a remnant. 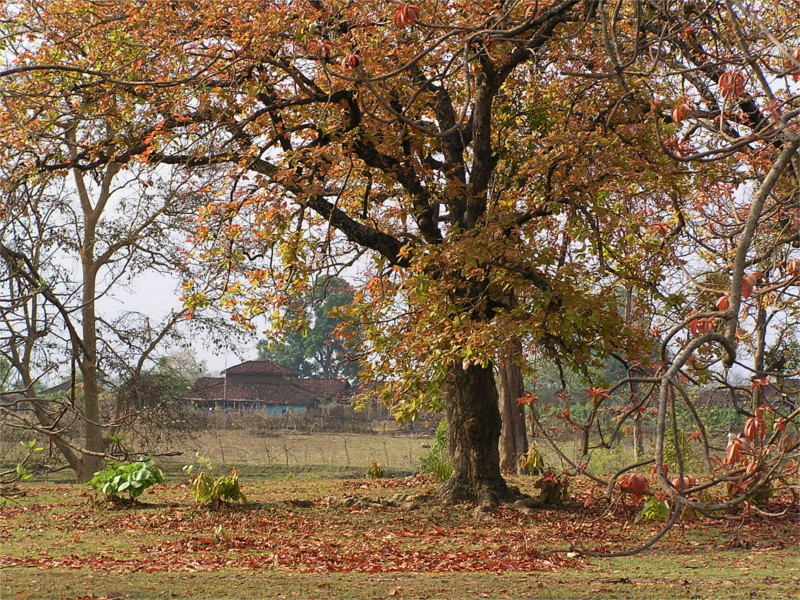 The vegetation changed as we came nearer the village. I did not recognize it then, but the mahua trees (Madhuca longifolia) surrounding the village were planted by them. In some places these mahua groves have a sacred status. It is interesting that mahua is a keystone species in such areas, encouraging the growth of several other kinds of plants, and perhaps attracting insects and birds. I guess the ecological engineering of Gonds is something that we are yet to completely understand. Contemporary records tell us that the late medieval period in this part of India was much drier than it is today, and there were many efforts to conserve water. It would be interesting to take a wider view of this kind of ecological engineering to see its effect on conservation of this kind. This history surely has something to teach us for the future.

The village was extremely small, just a few houses clustered together. I was fascinated by the painted walls of the houses. The dado was common. In offices and hospitals, the dado usually has a darker stripe on the bottom and a lighter colour on top, to hide accidental stains. Here it was reversed as you can see. I wonder why. I liked the patterns painted around the door. The long shaft of the yoke was fascinating. I suppose the length of the shaft means that the force applied at the yoke will be more nearly horizontal, resulting in easier rolling. The trade-off is that starting and stopping will be harder. Clearly this is a cart made for long-distance hauling on a flat terrain!

The village was not very empty. Most men were out, perhaps at work. Around a courtyard we found three generations of a family. The matriarch was almost bent double. Each family owned cattle. So I suppose milk and sunlight must be plentiful. Why would osteoporosis be a problem here? I found later that Gonds usually don’t drink milk as adults, perhaps due to widespread lactose intolerance. I suppose all the households in the village had three or four generations living together, and the families would probably be related to each other. I realize that I knew very little about the culture and history of the Gonds. That’s something I should repair; I share a country with them.

In the garden behind Baz Bahadur’s palace someone had laid out beds of spider lilies. I wondered whether this was anachronistic. The genus Hymenocallis comes from South America. This particular flower belongs to the species Hymenocallis caribaea, from the Caribbean islands. Could it have reached Mandu by 1555 CE, when Baz Bahadur became the sultan? Perhaps. After all many wonders from the new world reached the Mughal court by Akbar’s time. On the other hand, Mandu was a relative backwater, not the capital of a large and rich empire. Unless someone discovers a manuscript or painting from that era showing spider lilies, “perhaps” is the best answer we will have.

The spider lily tells a much older tale. The genus is most closely related to the Agapanthus, flowers which are called Lilies of the Nile. This is a misnomer, because these flowers originate from the west coast of Africa. How is it possible that a west-African genus is the closest relative to a Caribbean and eastern South American genus? The answer is in continental drift. 550 million years ago, Africa, South America, India, Mozambique and Australia drifted together to form the super-continent called Gondwana. The ancestors of these two kinds of flowers would have developed in the center of this continent. 130 million years ago, a rift created the south Atlantic ocean, separating the common ancestors of these flowers. Their descendants in the now separated continents of Africa and South America are now these two genuses.

A macro that I took of a flower eight years ago is a reminder of the deep history of the earth.