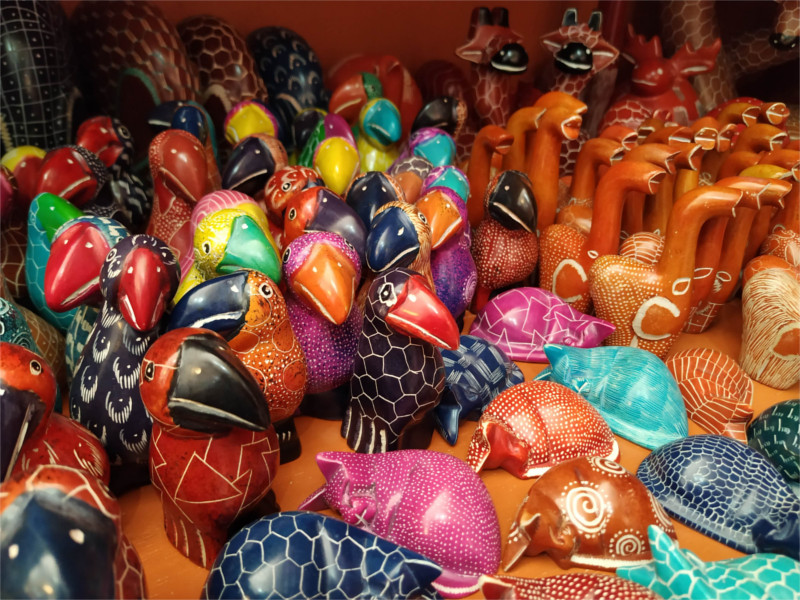 As a tourist in Kenya you will see a lot of handicrafts, from roadside stalls to museum gift shops. One thing you cannot miss seeing is the beautiful sense of design in every piece. Things for everyday use are sold on the pavement: from wooden furniture to beautifully decorated trays. I suppose these things are used by locals, but I could easily imagine us keeping one of these trays on our table as a fruit basket. Tourists are confronted with little (or big) carved pieces of stone or wood. They are beautifully decorated with the colours, lines, circles, and stippling that I began to identify as a local artistic idiom. Click on any of the images below to go into a better view of the merchandise. I really loved them. 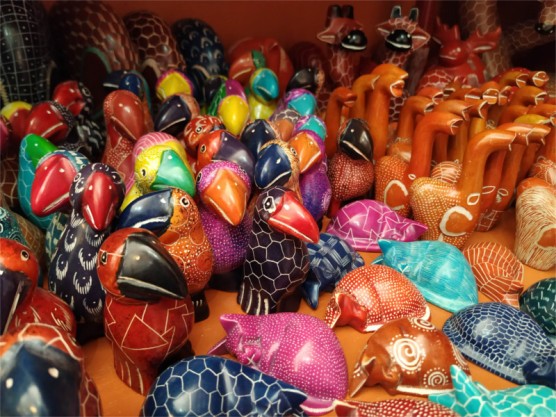 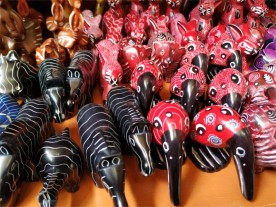 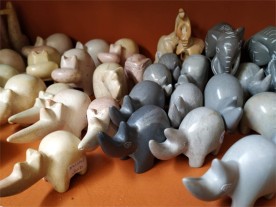 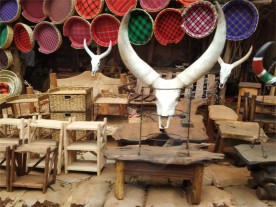 All this beauty comes from a land which was systematically devastated by wars of slavery, during which able-bodied people were largely taken away captive. Who makes these, I asked now and then. Often the answer is mzee, a Swahili word meaning old man, used more as a term of respect than a description of age. If art like this is the remnant of the culture of this continent, I wonder what it will be like when it comes to a full flowering.

Late in the afternoon Mother of Niece Tatu asked The Family whether we needed to take anything with us on the trip we planned the next day. We’d had very little sleep the previous night, and I was forcing myself to stay awake until the night to adjust to the local time. Walking about would be the perfect way to keep awake, so I hoped that the question would result in a long expedition to which I could tag along.

A large part of the expedition was a visit to a Masai market. We were to find later that it is a Nairobi staple. There are several of these markets; a large one travels to a different mall every day. We spent part of the evening in the Diamond Plaza shopping complex where a smaller one sits a few days a week. The sight of a large variety of semi-precious stones ensured that I wouldn’t feel drowsy for a while. I hadn’t thought about it before, but I realized that the interesting and violent geology of the rift valley would be the source of a large variety of such stones. 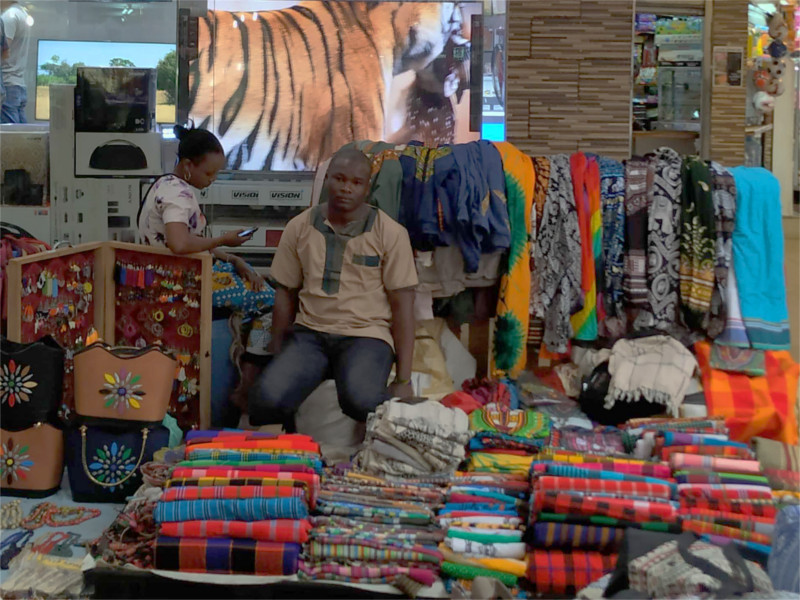 I thought I would look for a kikoi or shuka. The kikoi is an extremely versatile tectangle of hand woven cloth which can be used as a lungi or a shawl, or folded over into a backpack or a turban. If you have seen photos of Masai wearing a red blanket, then you’ve seen a shuka. The Family instantly realized what a wonderful thing a kikoi could be, and supplanted me as the main customer.

I wandered off to look at the other handicrafts. These are all produced in little workshops at home, something that we would call a cottage industry in India. This very Gandhian model of economy now produces a huge variety of objects for the large tourist trade that Kenya has. I loved the polished wooden kitchenware with the beautiful zebra themed highlights. The prices that they go for are so small that you wonder about the cost of living in Kenya. 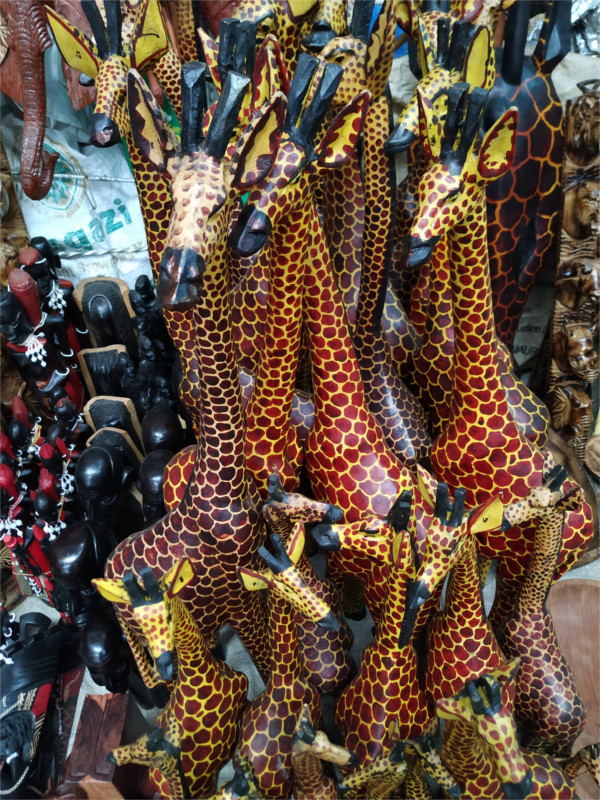 I’m sold on giraffes. When I looked at the painted wooden giraffes on display here I knew they could not be Rothschild’s giraffes, since they did not have the white socks characteristic of the species. Were they Masai giraffes then? I looked at the long ears and resolved to keep this feature in mind when I got to see them in the wild. Of course all these are stylized representations of the animals, so it was possible that certain features are exaggerated or removed.

The stalls were just a piece of cloth laid on the ground with the wares displayed on top of them, just as in street markets across Asia. The tourist trade is often drawn off into shops inside malls where exactly the same things are sold at a premium. We saw more tourists in those places than in these Masai markets. Economic theory fails to explain this. The result is that the primary producer, the people who make and sell these things at Masai markets, earns much less than the middleman who sells them in bigger shops at malls.

I wandered over to a vendor who was selling etched glass. The baobab and acacia trees, the lions, zebras, and buffaloes, were beautifully rendered. I asked the lady selling it whether she did it herself. “No,” she said, “this is done by a mzee.” MONT explained that mzee literally means an old man, but can be used as a respectful term for anyone. I promised the lady that I would be back later to buy something from her. This first expedition was just scouting the market. The Family had also decided to postpone the buying of kikoi. We moved on.

In China we keep seeing artisans selling their own work. This lady was sitting near the Bell Tower of Xi’an making these lovely pieces with rope. The work looks very similar to the corresponding Indian work. I suppose she must be making a reasonable living. What strikes me most about this is the difference with India, where the artisans usually work in the village and there is a long chain of middlemen between us and them. The market for handicrafts in India has started changing in recent years with cooperatives and direct sales, although I think the volumes involved in this newer market is still much smaller than in the older system. I guess a worker’s cooperative could work somewhat differently in China.