There was little time to prepare for our trip to the Himalayas. I worried about whether I should pack Pradip Krishen’s field guide to the trees of Delhi, but then decided against it; after all most of this book dealt with trees of the plains. There are excellent guides to the birds of India, one for butterflies, ancient ones for other animal orders, and certainly nothing for the trees of the Himalayas. One of the few useful resources I came across was an excellent blog post on the trees of Shimla.

The quick field guide which I made for myself can be useful on future trips. There is such an incredible variety of trees across the Himalayas that anyone could spend a lifetime studying them. The little part which is captured in this small list served me as landmarks to orient myself by.

I walked with The Young Niece beside the main Shimla-Kullu highway at an altitude of about 3 Kilometers above sea level. At this place the road was lined with enormous trees. I asked her whether she could put her arms around the straight trunk, and she said “The two of us together can’t do it.” She is almost as tall as me, so the circumference was a little bit more than 3.5 meters.

Most of the trees which we could see along the road were tall, maybe about 25 meters high. We stood below one and admired it. The Young Niece was very interested in the texture of the bark and the mosses which clung to it. I took a photo gazing up along the trunk (the featured photo) which she certified as a good capture of the bark. The trunk grew straight up for quite a distance before it branched out. They reminded me of the pillars in the tomb of the Ming emperor Yongle, each the trunk of a single deodar tree (called nanmu in China, and Cedrus deodara by botanists) imported from Nepal. She asked whether this was deodar.

We searched for the answer by looking at the leaves below the tree. The deodar would have had needle-like leaves. The Young Niece picked up several leaves from the ground. The more recently fallen leaves were still green on one side but brown on the other. Since the tree was not a conifer, I’d already begun to ask myself whether it was an oak. The leaf colour told us that it was a Himalayan brown oak (Quercus semecarpifolia). She sorted through a few leaves and found one which had turned a fascinating golden brown. I laid it on one of the concrete slabs which borders the highway and took the photo that you see above.

The Oak Society writes that these trees can grow up to a height of 30 meters, and have a girth of about 3.5 meters. That is about right for the trees that we saw. The bark was grey and had shallow cracks, as you can see. The leaves were about twice as long as they were broad, and the breadth was about 4 centimeters. They grew well-separated from each other, as you can see in the photo above, giving each tree enough space to spread its canopy. The brown oak is the major component of forests at this height, between 2 and 3 Kilometers above sea level, but disturbed forests are seen not to grow back. Again, much remains to be understood about these giants, but ecological models indicate that if the mean annual temperatures rise in this region by about 2 Celcius, then three quarters of the trees could be lost. I’m happy that I walked here and admired these trees with my niece; her children may not have this privilege.

Jalori pass could be just another Himalayan pass, and not a very spectacular one, at an elevation of 3120 meters above sea level, were it not for the fact that it is the closest of the Himalayan passes to Delhi. That, and the fact that it is usually the first to open after winter means that it gets a lot of traffic. As a result, there is a thriving little bazaar that has sprouted at the top of the pass. It is usually closed between mid-December and mid-March, but in the middle of a day in mid–May so many doors seemed to be closed.

Among all these closed doors we found three dhabas which were open. The most popular one had rajma-chawal for lunch. The Young Niece sniffed at our plates and declared that she was ready for a bowl of Maggi noodles. This is standard fare in the mountains. I’d taken a quick look at the dhaba next door, since it advertised parathas. It turned out that they were not making them that day, but I could have a rajma-chawal if I wanted.

In the photo above you can see the only other establishment that was open. The Mahakali temple was perfectly placed for north-bound traffic. As we ate, I noticed that a car or bus would occasionally halt at the steps of the temple. People would tumble out of the vehicle, and into the temple. A brief ritual halt, and they would be on their way again. The Family climbed the ridge behind the temple and declared that she had a marvelous view of the distant high Himalayas. 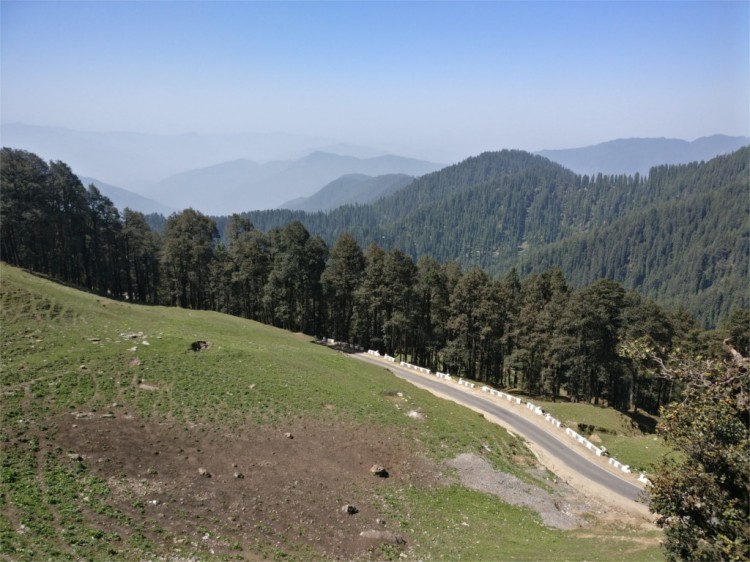 I think of the Jalori pass as a gateway. On one side there are the high Himalayas which The Family loves. On the other side, you have the view that you see in the photo above. The road falls away towards Shimla and the plains. The lovely sunny meadow stretches down towards a thicket of brown oak. Beyond that, lower down, the oak forests give way to the Chir Pine forests which you can see in the distance.

As you travel through the Sivaliks you see forests of pine slowly give way to oak as you climb higher into the Himalayas. At the Jalori pass, which is at an elevation of more than 3 Kilometers above sea level, you see mainly brown oaks towering above you. Then, once you are over the pass, a whole vista of the Himalayas open up: across the broken ranges of the forested middle ranges right up to the high Himalayas. The snow covered peaks that you see in the photo above were probably closer to us than Parvati Parvat (whose peak at an altitude of 6.6 Kilometers makes it the highest in the district of Kullu). 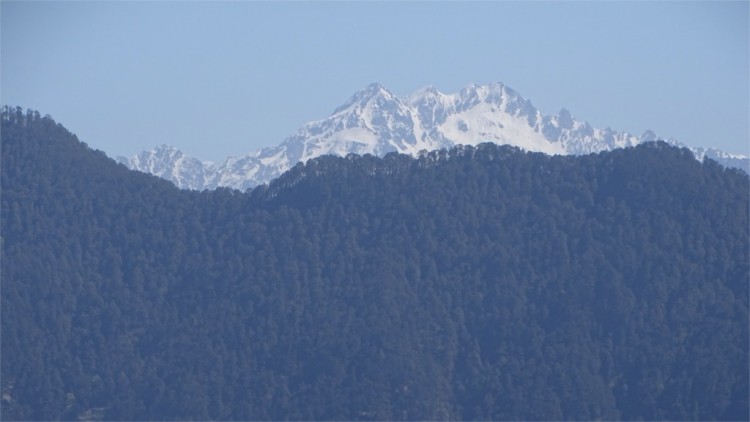 A closer zoom towards the peaks shows little more. The nearby forested ridges hide the higher mountains from view. The photo which you see above was taken from the Jalori Pass in Himachal Pradesh. At this height the forest around us was dominated by brown oak. As you climb higher, these are the last trees to die out. So the trees along the top of the ridge in the photo are probably brown oak. The distant snowy peaks are likely to be about 5 Kilometers above sea level. 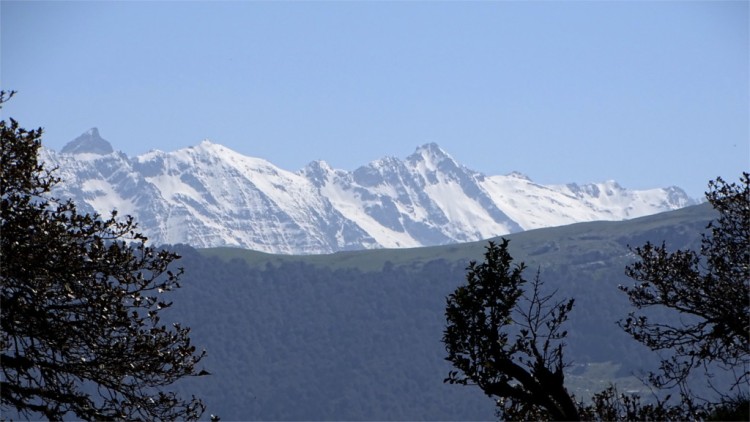 Views of these peaks raise the travel-nerd in me. I see the next ridge, and I feel like exploring that. Then, of course, there will be the next ridge, and the next higher one, as you slowly climb. I have done that in the past, but this trip was a simple one, taking The Young Niece with us up to a height where she would still be comfortable. We looked at the meadows on the far ridges. The Family climbed up to a meadow on a near ridge while I walked with The Young Niece under the green trees of this middle earth, between the plains and the mountains.

The weather changes fast on the mountains. Storms raced across the hills during this week, bringing dust-storms to the plains. The next day, we walked to the edge of high cliffs and looked out again on the high Himalayas. The ice in the high valleys two Kilometers higher shone bright even in the diffused sunlight which filtered through the clouds. 50 million years ago, the Indian plate crashed into Asia, slithering into the magma below it, and pushing the Tibetan plateau into the sky. The Himalayas mark that catastrophic but slow collision. The Sivaliks, otherwise called the lower Himalayas, were made by crunching together the detritus left over from this collision, and were raised about 15 million years ago. 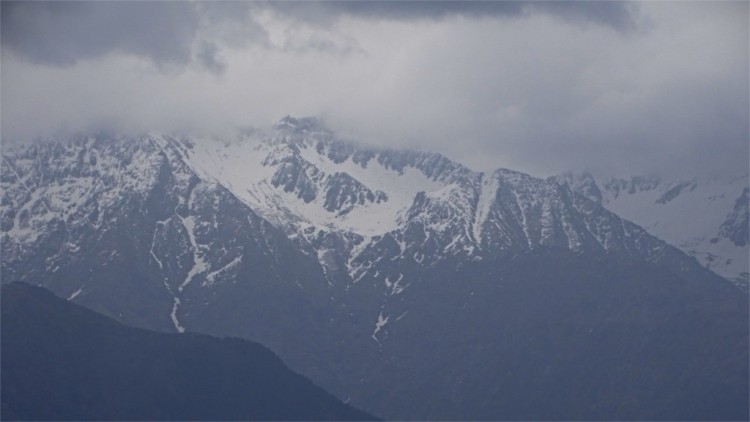 The Family never finished reading The Lord of the Rings, but it contains a verse, written in the Sindarin language which the old Don made up, which is appropriate for her. In English it goes “We still remember, we who dwell in this far land beneath the trees, the starlight …”. She cannot tear her eyes away from those distant peaks. We stood together, looking out at that harsh landscape of rock and ice. I was lost in matters of zoom and foreshortening, mulling the turbidity in the air, as she imagined herself walking up those rocks.

Our first view of the Himalayas on this trip was after an unproductive morning of bird watching. We were coming down from a drive up to Rohla. The Lotus had decided to walk down while the rest of us took our time piling into the car. We drove down to a turn in the road where we could look across the Great Himalayan National Park to the peaks where the Tirth river originates. The air was foul again, and the glacier could not be seen. The Lotus came down the mountain and all of us looked into the distance, knowing that it was a seven day walk to the mountains that we could see.