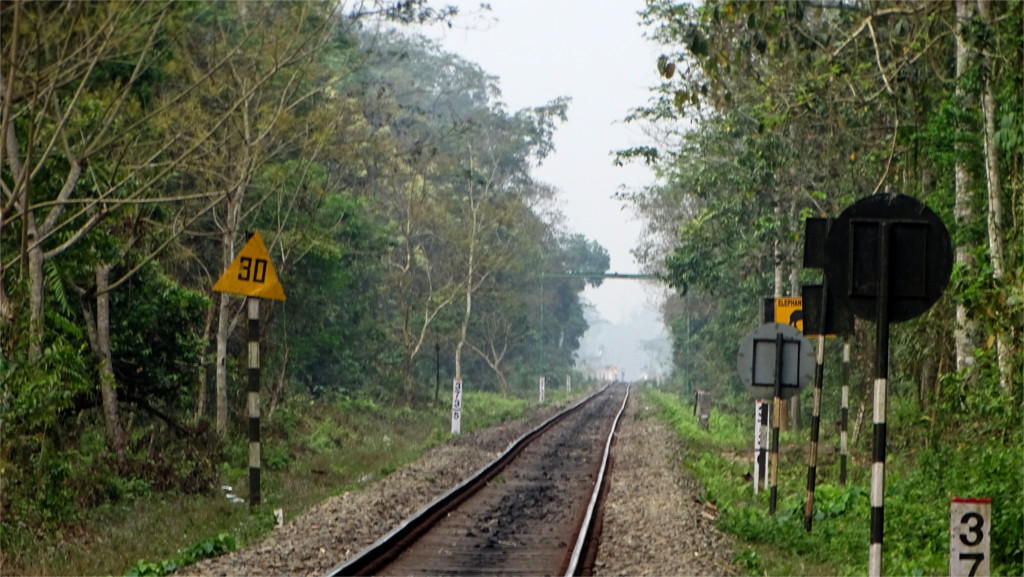 A railway line cuts through the Hollongapar Gibbon sanctuary. The gibbon census of 2008 recorded 3 families of Hoolock gibbons in the smaller part of the sanctuary and 26 in the larger part. Hoolocks never descend to the ground, preferring to swing from tree to tree in the middle and upper canopy. As you can see from the featured photo, the railway line creates an impassable barrier to these apes.

Hoolock gibbons (Hoolock hoolock) live up to 35 years, have a single baby every two or three years, and mature in 6 years. So, on the average, the number of families doubles in three years. According to an expert who walked us through the forest, there is no overcrowding yet. So the number of families may have tripled in the last 10 years since the census. This means that the population in the smaller section of the sanctuary is in danger of inbreeding.

Recognizing this, the forest department created what they thought was a gibbon bridge. That’s the strange structure which you can see in the photo, crossing the tracks at the level of the upper canopy. We were told that no gibbon has ever used this. When we followed a family of gibbons through the forest we realized that they never walked on branches. For over half an hour we saw them swing and jump from one branch to another. The bridge completely neglects this simple observation. If you know of a bad design award for wildlife conservation, I nominate this bridge.

When we were young, my cousins and I would occasionally rumpus through the house and be brought up short by our grandmother calling us “A bunch of oolluks.” When we asked her what an oolluk is, she would clam up and say “You haven’t seen one.” Years later, when I first saw a small family of Hoolock gibbons hooting and swinging through trees, I knew that I’d finally found the referent.

The Western Hoolock Gibbon (Hoolock hoolock) is a creature of habits. It wakes late, breakfasts at about 9 in the morning, plucking tasty leaves and fruits while swinging through its home range. Hoolocks live in nuclear families, papa and mama with at most three children. They have one child at a time, and when children mature at the age of six or seven they leave their parents and younger children to find their own true love and settle down. We saw a family of four: one infant, one boisterous child, and the parents. The featured photo shows the mother with child. The child’s fur will turn dark after it is six months old.

In a year or so it will look like its sibling (photo above) running in loose circles around its parents and perhaps getting into tight spots like the older sibling. We saw this juvenile come too close to the nest of a pair of lesser racquet-tailed drongos (Dicrurus remifer), and be mobbed by the pair. Drongos are great imitators, and we heard them imitating the call of a fish eagle when trying to drive the gibbon away. They succeeded, perhaps by just being sufficient nuisance rather than by being scary. 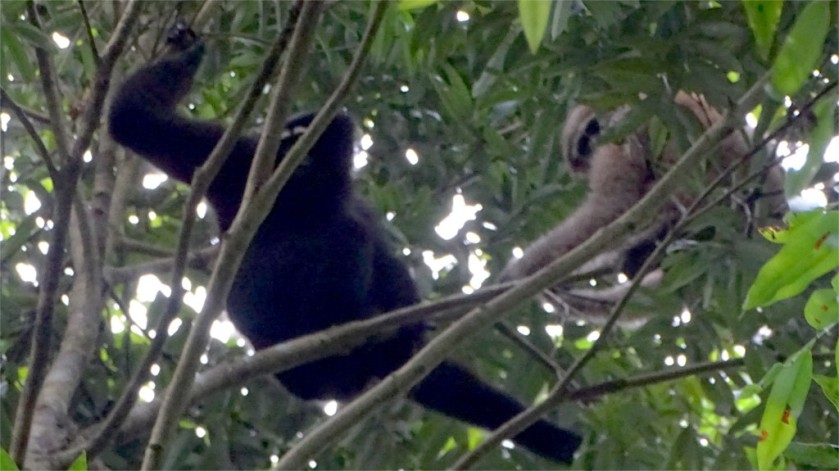 We’d woken at an unearthly hour to drive 60 kilometers across bad roads to reach the Hollongapar Gibbon Sanctuary, where we met an expert to guide us through the forest. When we first sighted the Hoolock family, the parents were seated comfortably in the canopy, facing each other just like a couple at home (photo above). The male is very dark in colour, whereas the female has a buff coat; but they are very similar in size. The white eyebrows of the male get extended to a nearly complete circle of white around the face of the female. Their calls were loud and elaborate, and are meant to advertise their presence. They were not shy, and largely ignored us.

The IUCN red list classes H. hoolock as endangered because of enormous population losses: halving every three generations for the last couple of decades. While this is partly due to hunting, most of the reduction is due to loss of habitat as forests get cleared for tea and agriculture. Anecdotal evidence from the Hollangapar sanctuary says that locally the population is growing. We will know when the results of the census of 2015 are published, and can be compared with the result of the old census of 2008.

Gibbons move very fast through the canopy, swinging from branch to branch. As you can see from the photos, their load bearing limbs are the arms, and they seldom put their whole weight on their legs, using them mainly for balance. We ran stumbling through the rain-forest below them, trying to avoid falling into hollows or getting entangled in vines. Once I had to use an arm to swing around a tree-trunk, and it was only later that I noticed the interesting reversal in the use of limbs between me and the gibbons. When they quietened down to eat something it was easy to lose them in the gloom below the canopy. Then one could tell their position only by the slow fall of dry leaves from a disturbed branch. My spectacles misted up continuously, so a lot of the photography was guesswork. I was happy that I’d spent the previous year getting back in shape; following the Hoolock family through the rain-forest would have been difficult otherwise.

The sprawling 425 acres of the Kandawgyi botanical garden is one of the best places to spend your time in the British era hill station called Pyin Oo Lwin. It was founded by the British Army colonel May and called Maymyo (May’s town). The summer capital of Raj-era Burma remained one of the favourite spots of army generals, so the town has been kept manicured and clean, but renamed. We saw amazing things here: a Hoolock Gibbon in the open (featured photo) and Takins (a Himalayan goat-antelope). Everything we saw here could also be seen in India, but you’ll have to travel to the wilds, and be lucky, to see them.

A meandering walk through a garden is a quiet and peaceful way to spend your time, so look through the photos below at your leisure, without my chatter to break the peace. 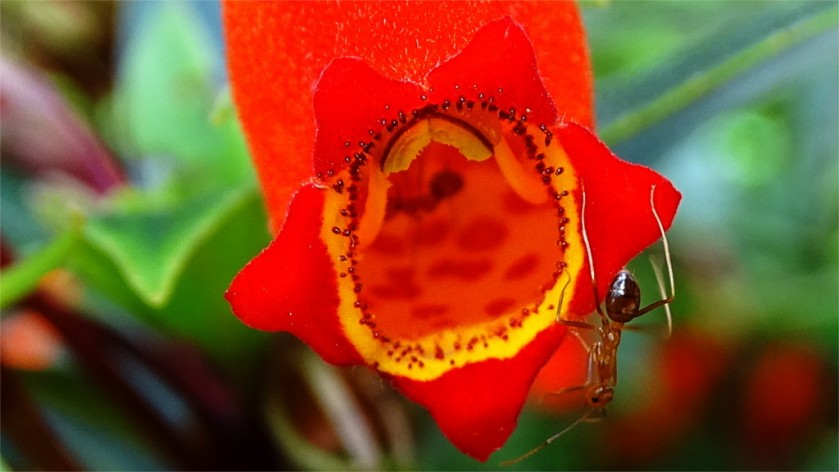 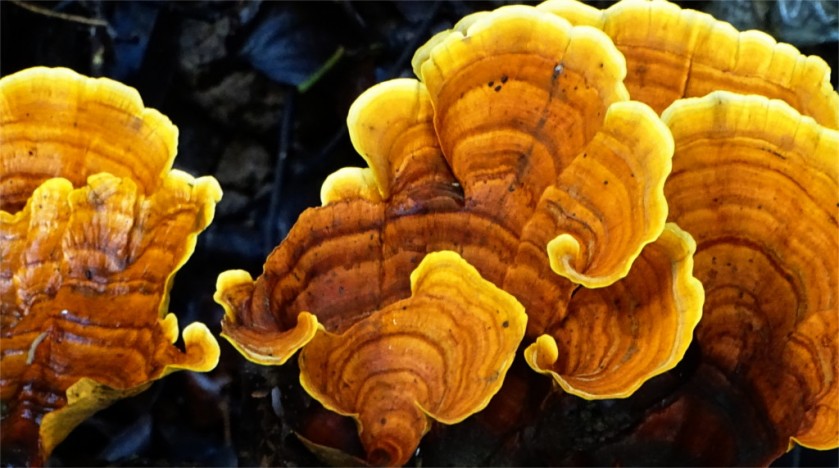 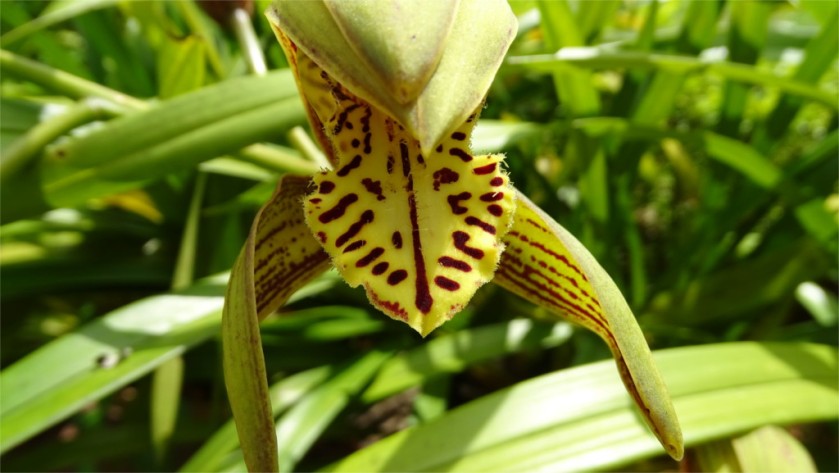 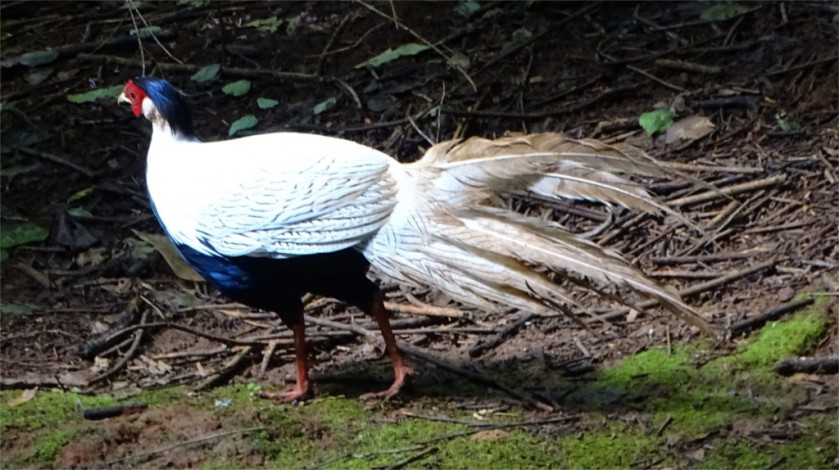 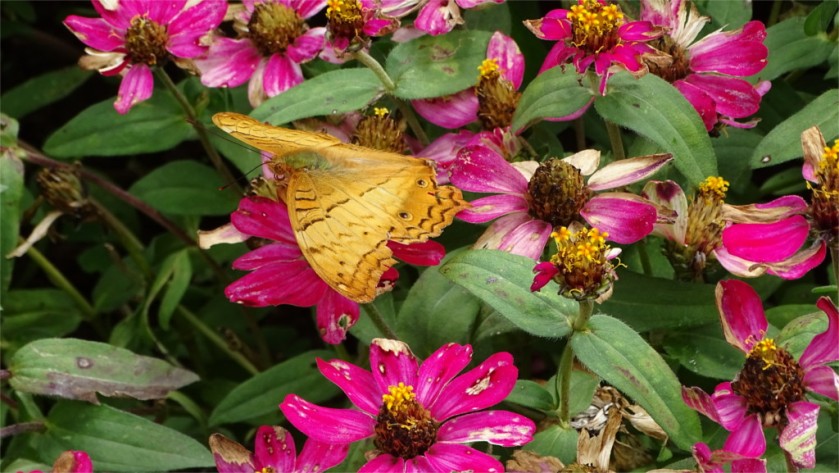