After reading about mudskippers yesterday, I eventually connected them with a bit of information I’d forgotten. In the time that mangrove forests and mudskippers were beginning to evolve on the western shores of the Tethys Ocean 50 million years ago, the earth went through a climate catastrophe. Geological eras have names that I find fascinating. This was the beginning of the Eocene epoch, the name means the dawn of modern times. If you want to be more specific, you might call it the Ypresian age, a 8 million year blink of time starting 56 million years ago. What I remembered was that in the Ypresian age the earth went through a heating event that we call the Paleocene-Eocene Thermal maximum (PETM). Temperatures across the earth were between 5 and 8 degress Celsius higher than it is today.

At this time the continents had not yet reached where they are today, as you can see in the map above, but they are not completely unrecognizable. The deep oceans saw a tremendous extinction; between a third and a half of ocean species died out. The oceans became acidified and hot. Their levels rose, water saturated the air. The poles warmed more than the rest of the world. As a result, the Antartic was forested and ice free, and tropical rain forests covered southern Germany. Canada, as far north as what is today Baffin Bay, had swampy conifer forests regularly ravaged by forest fires. The part of India which is now the Thar desert seemed to have had extreme rains and weathering during that time, whereas northern Spain was a parched desert. It is hard to prevent a large body from heating up, so mammals became smaller. This may have had many consequences, but one that has been followed up is that it encouraged a rapid evolution in the ancestors of today’s horses.

Although the map of this world looks almost the same as ours, this hot and rain-drenched world is not suited for agriculture. Estimates of our carbon future showed that in “business as usual” scenario we will be there by the end of the century: in the time of the grandchildren of the millennials. There is a reason that projections stop at the year 2100: no climate simulation remained believable beyond that. Very recently though, a climate model was able to reproduce the PETM using reliable estimates of the amount of CO2 then present in the atmosphere, by following the small-scale dynamics of clouds more accurately. This simulation seems to say that the future temperature rise could be more extreme than had been predicted. We live in unsettled times.

For a few days now I’ve not been able to stop thinking of horses. Their origins mysterious, like the origin of everything we see around us. Their role in human history and culture, large and long. When humans arrived in most continents, the number of equine species had probably already dwindled to more or less what it is now: two or three. Historically, only two were domesticated, horses and donkeys. Although zebras have been trained (Lord Rothschild once drove to Buckingham Palace on a zebra-drawn carriage) they have not been successfully raised in domesticity.

Two sculptures of horses really stick in my mind. One is the pair of life-sized blue horses, polyester resin images made by the French artist Assan Smati, the other is the group of four harnessed to a chariot, made of fired clay in China probably 2200 years ago for the tomb of the Qin emperor Shi Huang.

Inside the Zhan garden in Nanjing, I came across a little exhibition of arts and crafts. All I could tell was that it was not in a contemporary style. The labels on the exhibits were written in calligraphic Chinese, which I find very hard to read. If you are able to read the poster in the gallery below, I would be very glad to have your help in learning more about what I saw. 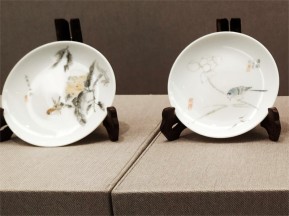 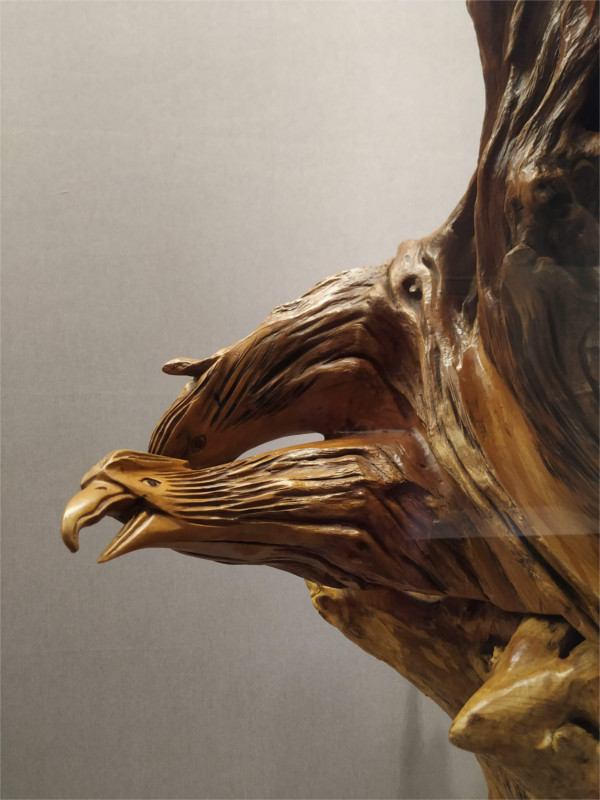 I’m always fascinated by the Chinese imagery of horses. The rest of the world divides horses into two types of symbols: those of speed (think race horses), the other of plodding power (think of a draft horse). The Chinese view of horses is that of nearly untamed power; it is an achievement to tame it. I looked carefully at all the horses on display. Chinese calligraphic art makes it way into the design of plates. I love the acute observation and wonderful execution of the pictures of flowers and birds that you can see.

Although every Indian now seems to know about the bull run of Pamplona, the football clubs of Madrid and Barcelona, and Bunyol’s festival of La Tomatina, until a few years ago a random person in a Mumbai train would not be able to say anything definite about Spain. The historical connection between India and Spain being so meagre, it is odd to come across a beautiful Renaissance building in Seville called the General Archives of the Indies. It took me a moment to realize that the Indies in question lie across the Atlantic.

We never entered to gawp at the eight kilometers of shelves which hold 80 million pages dating from the 16th century CE to the end of the Spanish empire in the 19th century CE. I doubt that access is permitted to this treasure trove of recent history. However, some of the documents of general interest are on display.

The Family drew my attention away from the cathedral to this building right outside. Apparently it was first built as a market hall for Seville, to draw merchants out from the cathedral, where they had conducted their business till then. King Philip II of Spain got his favourite architect, Juan de Herreira, to design this building. The clean uncluttered lines look beautifully modern.

The horse carriage that you see in this photo will be visible on any day I guess, standing in that particular patch of shadow. This spot is one of the "stations" where tourists can hire a carriage. Why is Seville full of these antiquated and expensive things? They seem to have something to do with the April Fair in this region.

We reached Ura around noon. The air was just beginning to warm up as we drove into the village.

The surrounding fields were green. We saw cattle and horses grazing nearby. Some of the fields were tilled. Although we didn’t pay much attention to it, we did not see anyone out on the fields. The houses were clean and well painted, but as we passed by, we did not see anyone. We could hear music playing somewhere, either a radio or the tape recorders which were common here at that time. But there was no sign of a person.

Someone voiced the most practical course of action, “Let’s go to the Dzong.” At breakfast in Bumthang we’d been told about the paintings in the Dzong, and we did want to see them anyway. The monastery occupied the highest point in the village. We drove there and parked outside. The large courtyard was empty. The doors were locked. We wandered around looking for someone to talk to and eventually a young villager appeared. Communication was difficult, because we did not speak Dzongkha, nor did he speak Hindi or English.

Even our concerted efforts at charades did not convey the message that we wanted to enter the Dzong.

Defeated, we walked back. Dinesh drove back to the highway, and we followed on foot. The houses were very neat, but the road was covered in dung. Villages in remote Bhutan do not have much drainage. Waste water from houses flows through gutters alongside roads and peters out in some fields. Ura was no exception.

Walking through the village we saw women in a couple of houses. They were friendly and waved out at us, but we couldn’t find anyone who knew the languages we could speak. Maybe all the Indian movies which are shown here are dubbed in Dzongkha. There were cows in the fields.

Bhutanese villagers seem to tend cows as well as yak.

The fences between properties were made of wood and bamboo. They were weathered to a lovely grey colour, as you can see in the photo here. It made it very easy to spot the colourful insects which were everywhere. Of course, there have to be many insects to feed the enormous numbers of birds that we had seen on the way.

It was time for us to think of food. We walked back to the highway. 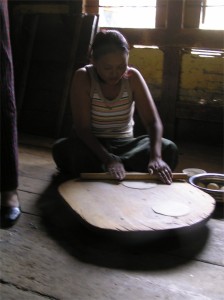 It was getting warmer, but at the pace we walked, a sweater was still comfortable. When we reached the highway we saw that Dinesh had located a little eatery. The women who ran it were very welcoming, and spoke a little Hindi. We got a lovely meal with fresh made parathas, and two wonderful dishes made of fresh vegetables from the fields. The meals we had in Bhutan were not particularly different from what we are used to, but everything was made with absolutely fresh ingredients which left a remarkable impression on me.

I remember the dining hall as full of local artwork, some hand-made, others printed. The calendar was Bhutanese, and there were a couple of large posters, at least one of which was the kalachakra. Masks were hung along the rafters. These are used in the temple festival. One of the ladies told us that during the festival a dance starts at the Dzong and comes past their shop and returns. The central part of the dance is a black yak, and there are others in various masks. I’d seen most of the masks on display, but the tiger mask (in the featured photo) was new to me.

I guess winter is the time to go back to Bhutan to see the temple festivals. All except Ura’s, which is in May. We seemed to have just missed it.

I find that Chinese images of horses are subtly disorienting. Perhaps I’m too used to the use of images of horses to depict freedom, grace and wild spirits: this is ubiquitous in advertising. Indian art also sees the horse as a symbol of grace. Chinese art, on the other hand, seems to see the horse as a symbol of power. The muscles of the chest and haunches are exaggerated. The photo above is a typical contemporary depiction of a horse; this is a piece in the art museum in Wuhan. Of course, contemporary art exaggerates. But the exaggeration says something about the artist’s notion of the subject.

How far back did this iconography emerge? I flicked through the photos that I’d taken during my recent trips to China and stopped at the image of the oldest horses I’d seen. The photo above is a famous piece, one of the two chariots dug up from near the tomb of the first emperor, Qin Shih Huang. It can be seen in a special exhibit in the enclosure with the famous terra-cotta warriors of Xi’an. One can see a fairly realistic depiction of a horse. If there is an exaggeration of the chest and haunches then it is mild. So the current Chinese concept of a horse is not two thousand years old.

That’s a long enough time for an academic to research and build a thesis upon! I’m happy enough just looking at these strange Chinese horses.