When I got on to a train to Bharatpur in early February I realized that I don’t travel much by train any longer. Most of my travel for work is done between cities connected by flights. When I make a trip far away, I try to maximize my time at the destination by flying as close to it as possible and then taking a car. These are high-impact ways of traveling. It is not unlikely that trains have smaller environmental impact.

Railway stations have changed a lot. The station in Mumbai was vast and much better organized than it used to be. But what was amazing was the station I got off at half a day later- Bharatpur in Rajasthan. This town has now defined itself by the Keoladeo National Park next to it. The park is one of the most famous birding spots in the country; if you tell anyone that you are going to Bharatpur they will immediately respond with “Birds.”

This incredible feat of conservation is celebrated in the railway station. Murals of lotus flowers and buds, metal cutouts showing deer and tigers, and paintings of birds decorate the station. If you ever rolled past the station in a train you would not miss the connection to nature that Bharatpur now professes.

Murals of owls, herons and foxes greeted me as I got off the train. My phone was not working so I waited while The Family took the photos which you see here. We were a small group of birders, most of whom we had met for the first time the previous evening as we boarded the train. Several of the others also had their phones out to take photos of the station.

We gaped at this large mural of painted storks in their nest. It seems that serious birders don’t take out their big lenses for stuff like this, although they should. I was pretty impressed by the four species which stood by the side of the nest in homage. A skein of flying painted storks were the first birds that were pointed out to us by our rickshaw-guide when we came here in the last century in the days before we had taken up birding.

Does Bharatpur have tigers? There are no residents, but occasionally one strays in from Ranthambore or Sariska, and its removal is a nine-day wonder. 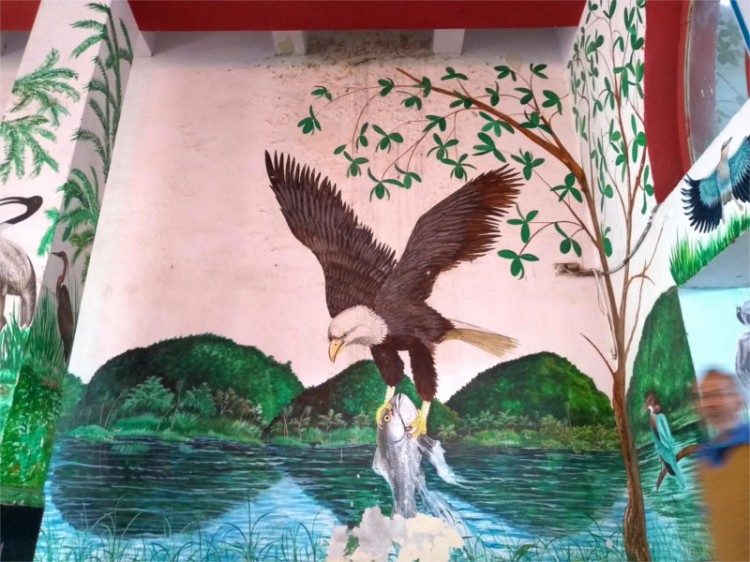 Our transport had arrived, and the spree of photography had to be cut short. As The Family took a last photo I thought that it would indeed be worth a note in a wildlife magazine if we could get a photo of a Brahminy Kite fishing. That Kingfisher off on the side seems to have turned green with envy.

I held on to this image for several months hoping to be able to work it into a nice story. I couldn’t find one. So before I forget, here is this photo of condemned railway coaches going past a traffic jam on the road. The story I’m tying that to is rather trite, but it is a photo that I like. I used to love traveling by train, but it is hard now to plan ahead to buy train tickets. Flying and driving is not the most eco-friendly way to travel, but given work schedules, there is little else that is possible now.

Almost the first thing I saw in Hollongapar Gibbon Sanctuary was an abandoned railway station. I’ve already written about the railway line which fragments the sanctuary and still has heavy train traffic. Because of my new-found interest in abandoned colonial-era structures, I made a beeline for it even as my companions were stretching their legs. Tall trees rose behind it. Grass and little herbs had taken root on the roof, but the sturdy brick structure was reasonably intact from inside. 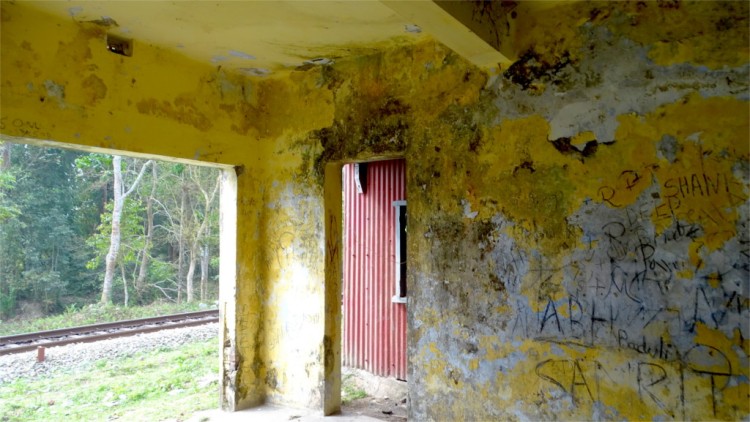 The paint was peeling and the doors had disappeared, but the plasterwork inside was relatively undamaged. I could only see two or three places where large chunks of plaster had fallen away. The floor was pretty undamaged, although it was strewn with trash. It was interesting to stand inside and look out at the rain forest and the single railway track which passed by. It is not hard to reel back time in your head to see a slow train come to a halt, while waiting passengers streamed out of the room to board it.

The long cement bench against the wall with windows was also pretty serviceable. At a pinch one could think of dusting it off and settling down for the night. One of the windows was missing its lattice work, but this would be hardly worse than the doorways without doors. The walls were typical Indian Railways dado: darker colour below shoulder height, and light paint above.

Even so far away from civilization, the wall has become a canvas, even a palimpsest, for Amit, Amar, Samrit, Deep, and a few other men. There are loves that dare not speak their names: B+B and D+S were par for the course. I was more intrigued by L+G+D and Amit+3. Something different is developing in these places clearly. 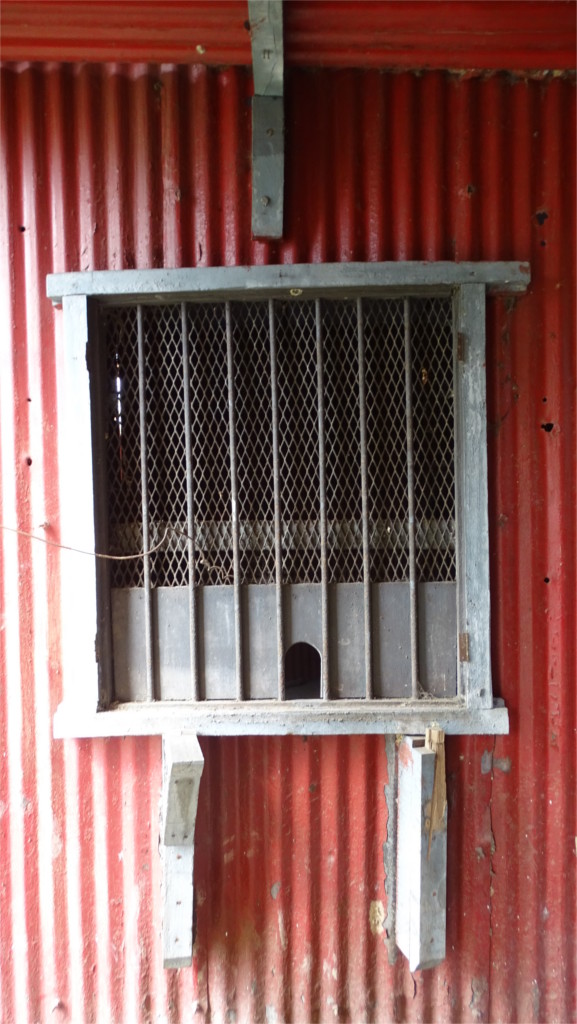 This was clearly the waiting room. The ticket office was next door: inside the massive prefab container. The counter was still open. The corrugated metal sheets still held their paint; there was no obvious sign of corrosion. Even the net over the window did not look badly rusted. There must have been a little platform of wood in front of the window. Part of the support is still there, but the plank above it has been taken away.

I peered in through the window into the large hollow space beyond. Wouldn’t it be wonderful for a photographic exhibition on wildlife? I thought of hanging my photos here, with bright LEDs spotlighting each. I suppose the space still belongs to the Railways, and if I want to have an exhibition here, I’ll have to apply to them.