Driving up the road from the village of Güllübahçe, we came to a vast and empty parking lot from which a rocky path led up to the well-preserved ruins of the ancient Ionian city of Priene. One thing that we eventually figured out about Greek cities was that it is good to start from the highest point: the acropolis. Priene was one of the twelve cities of the Ionian League of the 7th century BCE, currently proposed to enter the UNESCO world heritage list as an example of classical Greek town planning.

So, I suppose that the avenue which led us uphill was built much later, in the 4th century BCE. We followed it until we saw a sign for the Theatre (featured photo). This was built in the usual Greek style: the seats backing into a slope, facing a semi-circular arena in front of an altar. Behind this sacrificial altar was the pillared stage. We wandered behind the stage and found a Byzantine church (photo above). Priene continued to be occupied through the Byzantine era, until the 13th century, when the Turks arrived.

We walked down the nave of the church, and around a small section of a wall. There right in front of us were the ruins of the temple to Athena Polias. This is famous as a temple designed by the architect Pytheos, whose fascination with the style of columns which we call Ionic is visible in the scrolls of the capitals of the five standing columns. The temple was dedicated in 323 BCE by Alexander the Great. Behind the temple you can see the cliff of the ancient hill which was called Mycale. On the other side of the cliff is the temple to Poseidon called the Panionium. This was the central place of worship for the League, and was excavated in 2004. 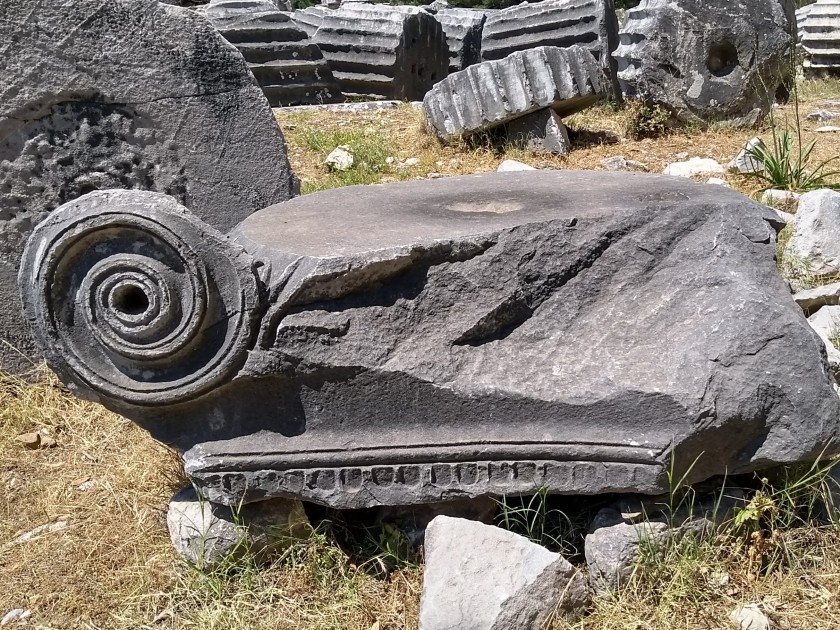 By this time we were probably the only people left in Priene. The bright sun beat down on the stones of this temple. It had been sufficiently well known that it was mentioned in the histories of Herodotos. Apparently Pytheos came to Priene after his work on the Mausoleum of Halicarnassus, one of the seven wonders of the Hellenic world. The temple was planned and started in the 4th century BCE, but not completed until the time of Augustus in the 1st century CE. As a result, Augustus was installed as a god along with Athena Polias in this temple. The scroll that you see in the photo above is clearly from the capital of one of the Ionic columns whose constituent stones are scattered about in the background.

The few remaining pillars, the scattered stones of a once-magnificent temple, the empty landscape, all came together in a magical place. The Family and I wandered around the open space, reluctant to leave. But we had to go away finally. We crossed the last remnants of a door (photo above), a column of massive of blocks just above a short flight of stairs which took us back to the avenue we had climbed in order to get here.