As we drove through the Thar desert, I was intrigued by villages which seemed half-built and deserted. Often blocks of yellow Jaisalmer sandstone would be piled up at several places, enhancing the impression that the houses in the village were unfinished. Eventually we stopped at one of these. Indeed, as you can see from the photo above, the village looks like a painting by Giorgio de Chirico: surreal empty blocks of buildings, open plazas, blue skies, bright sun, and not a living soul in sight. 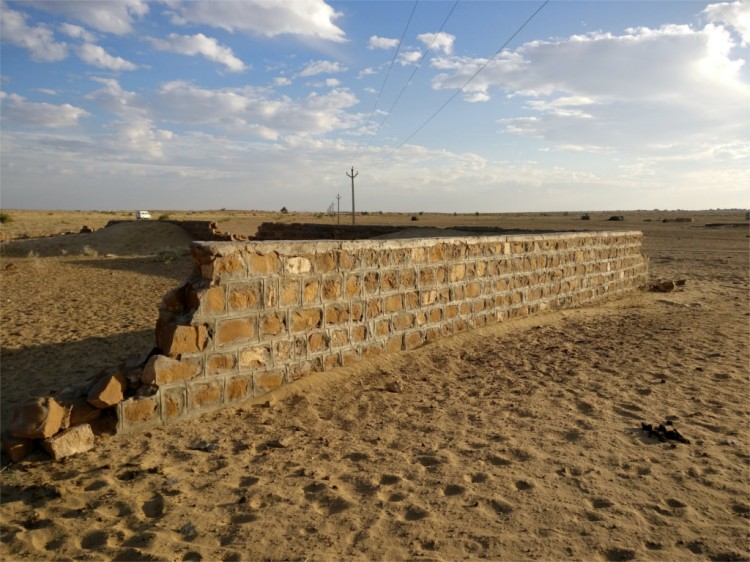 The buildings are made entirely of Jaisalmer yellow sandstone mortared together. The stone is common in this region, but not easily seen elsewhere. We found a few buildings which had been left unfinished. Sand had piled up against the boundary wall you see in the photo above. The electrical lines which cut through this empty village marched away to the horizon. Sand had also blown into the unfinished houses, and piled up in great drifts inside.

It was only when a bunch of children came running towards us that we noticed the real village. It was a couple of hundred meters away; a cluster of mud huts. The children gathered around us discussing every move we made in Hindi. There was some controversy about whether we were “English”. I decided to talk about very mundane things with them, in Hindi: like why they were not at school (it was after school hours) and whether they liked math more than Hindi (there was no consensus). After this conversation quietened them down, I asked them to pose for a photo. Only four did, and you can see them in the photo above. After this they decided there was no entertainment left in us, and they ran off. We were left alone in the deserted village, wondering why it came into being when there was a real live village right next to it.