I stood in a building near Indore, overlooking a parking lot surrounded by tall grass. My camera was already packed away in my backpack. Something moved through the grass, and my colleague said “That’s a jungle cat.” I caught little glimpses of it as I fumbled to take the camera out of the bag. It was large, and moved quietly with many pauses to look carefully at its surroundings. The camera strap was stuck around something. I had to look away to disentangle it.

I dropped my backpack on the floor, and raised my camera. The cat had disappeared. My friend pointed to a pile of rubble and said that the cat had gone behind it. Strangely, it had drifted in the direction of the parking lot. It sprang up on top of the heap of rubble and I tried to take some photos, one of which is featured. The cat quickly jumped off the pile and disappeared into the tall grass. It had given me a short window of opportunity, and I’d fumbled it!

What was it? It was big, perhaps a little less than half a meter off the ground at the shoulder. Because of the size, I thought first that it could be a caracal. This was unlikely, I knew, because the caracal is nocturnal. Moreover, its ears end in an elongated black tuft. This one didn’t seem to have such a fancy ear. So it must have been a jungle cat, Felis chaus, but a big one. What an unexpected sighting. 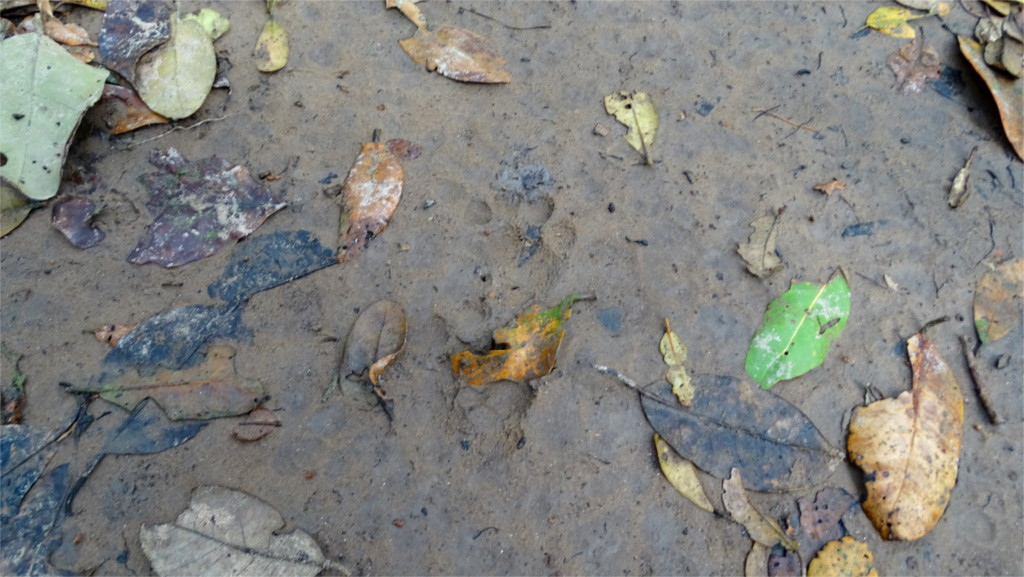 We got off the boat on a rickety jetty badly in need of repair. Behind it the trail disappeared into the forest. As walked through the mangrove forest in the morning, we noticed tracks (featured photo). The ground was unevenly wet, and there was a small section of the path along which there were a few pug marks.

It looked like a small cat had walked by. It couldn’t have been very heavy if one was to judge by how deep the marks were. One way to gauge the weight in mud like this is to push your fingers into the ground. The amount of effort it takes to push in your fingers to the same depth gives you an idea of the effort you would make to hold the dead weight of the animal in your arms. The marks could not be very old either, since it had rained quite heavily at night.

In any case, Bhitarkanika National Park is not known to hold large cats. It could have been one of the three smaller cats: the jungle cat, the fishing cat and the leopard cat. I haven’t seen any of these. They are shy creatures, like all wild cats, and their small size makes them harder to spot than their more famous relatives: tigers and leopards.

Bijaya was certain that it was a fishing cat. But I was not certain that my luck would take me so close to one. A recent census of wildlife inside the park had spotted three fishing cats to eleven jungle cats. Although the census was very likely to be incomplete (it had counted a single hyena) it perhaps can be taken as an indication that there are about four times as many jungle cats as fishing cats in the forest. Unless someone can tell me something about the shape of the pug marks which identifies the species, I think it unlikely that we saw a fishing cat.