After that first day walking around Tokyo, I had a week of work before some more tourism. This work week introduced me to the pleasures of bento (this was 1990, and the box had not yet spread through the US), vending machines which gave out cans of hot tea (in four flavours: matcha, Darjeeling, Oolong, and Assam), and karaoke, which had then just taken over Japan. Finally, on the weekend, I joined a busload of my colleagues for a trip to Nara. 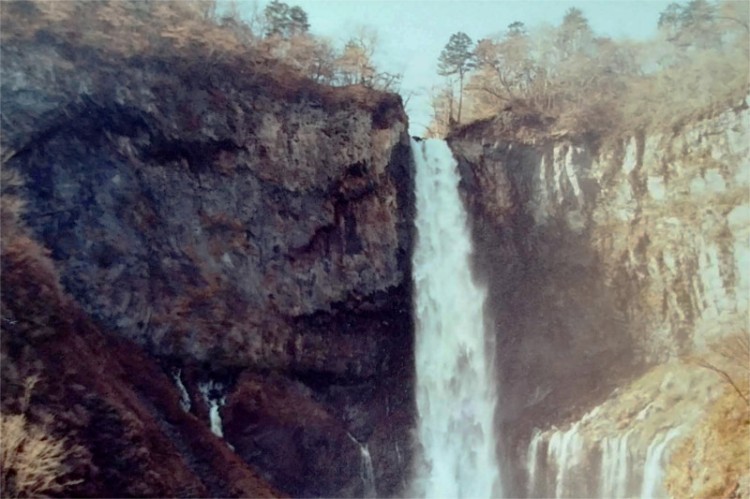 We rolled through crowded highways towards the town of Nikko. What I knew about it was that it had the tomb of Tokugawa Ieyasu, the person who unified Japan after decisive battles starting in 1600 CE. There was more to Nikko than this, as I discovered when we stopped at the 97 meters high Kegon waterfall. Autumn had coloured the forest in lurid colours. One of my colleagues told us the story of a young man who committed suicide here in the early years of the 20th century after carving a poem into a tree trunk. He was able to show me an English translation of the poem later. I thought it read like something that Camus could have written. 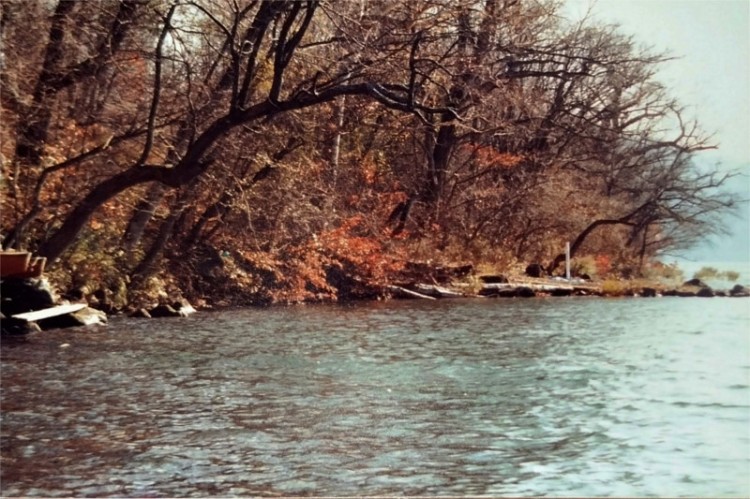 We got back into the bus and drove on to Lake Chuzenji. The traffic was bad. Alain, sitting next to me, said “This road trip is a nightmare.” We spent the rest of the halting progress talking about the grammatical gender of dreams and nightmares in French. Chuzenjiko was beautiful in this season, when the surrounding forests had turned into a lovely gold. But we had lost too much time in the bad traffic, and we had to move on to the main sight.

I’d already seen a shrine to the Meiji emperor, so I had a picture in mind of a Shinto shrine. But the Toshogu shrine was much more than that. The huge complex has beautiful wood carvings, and a lot of gold. That, and the location made it stunning. I spent a long time wandering through the warehouse area and came to a carving of the three monkeys, a theme which I’d thought of till then as Indian. The Kathasaritsagar was collected in the 11th century, but the stories may have been in circulation for centuries before that. Perhaps some were taken to China by Xuanzang four centuries earlier, and eventually entered Japan. 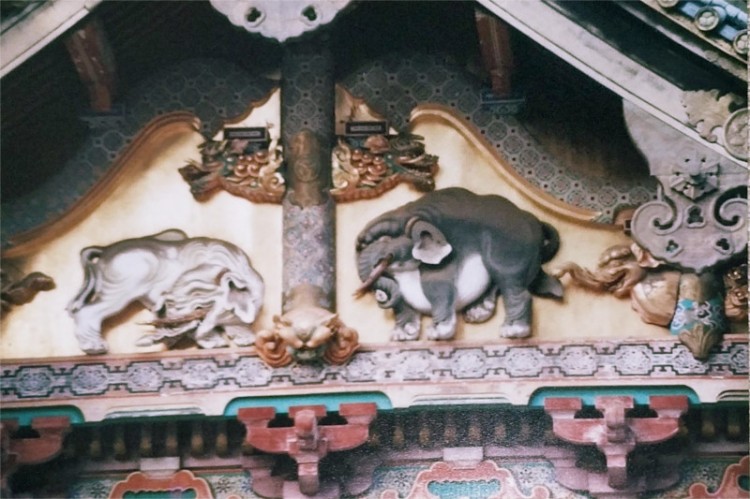 This was my first inkling of the long hidden connections between many different Asian cultures. Stories of elephants had clearly been carried from India with Buddhism. I saw these wonderful carvings of what must have been imaginary beasts to the Japanese woodworkers who made them. It reminded me of the strange lion carvings which I saw in various parts of India where no lion had been seen in historic times. 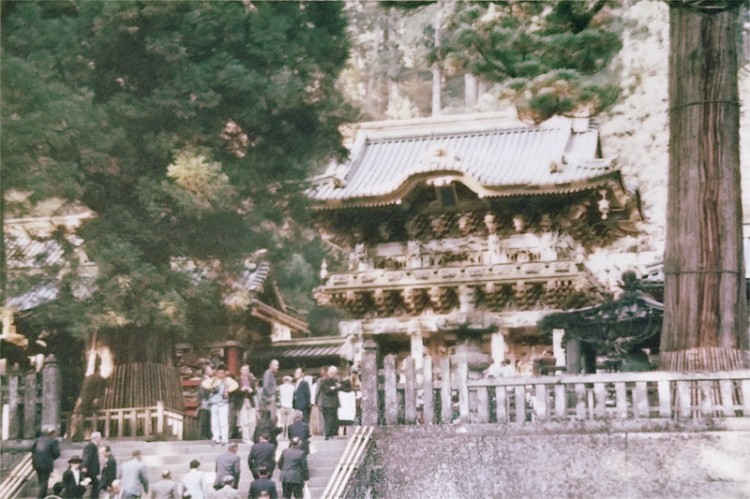 The main part of the shrine begins with the Yomeimon, one of the most decorative gates I’ve ever seen. Today I would have taken many more photos of the gate. But I see only this one photo in my album. I remember that this was taken with a roll of 100 ASA Fujicolor which I’d inserted into the camera the previous night. The 24 shots had to last me the whole day, and there were so many details which caught my eye! 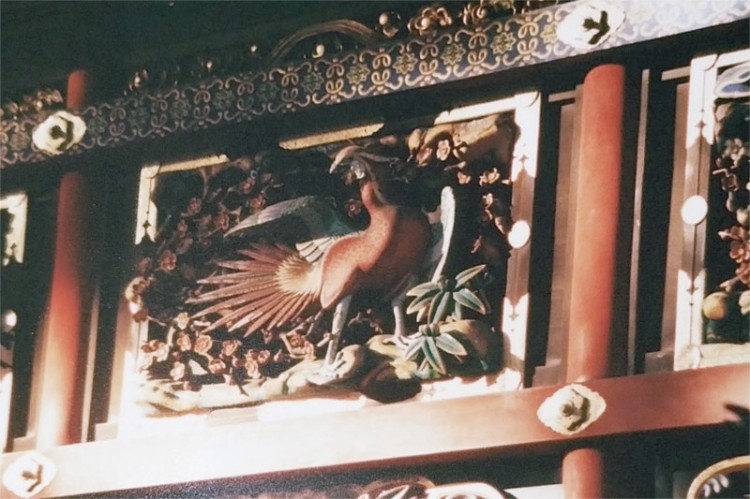 This carved wooden peacock on the Yomeimon was one such detail. I liked the beautiful colour of the wood quite as much as the intricate work. The gate was rebuilt in 1818 CE after a fire. There is a lot of such rebuilding in Japan, and there must be a well developed branch of restorative art. I wonder how much creativity each restoring artist is allowed. How much of this peacock is the work of the original woodcarver, and what has each restorer added? 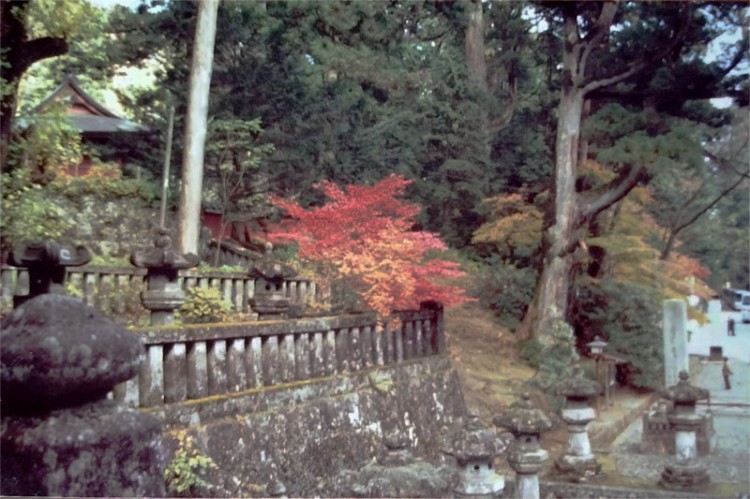 My memory tells me that once I passed the gate I walked through a long avenue surrounded by tall trees with seasonally colourful leaves. But I only have a photo of this place: presumably where Ieyasu was interred. My intention to capture his shrine was waylaid by my impulse of capturing the colours of the leaves, the result is the photo you see above; my final photo from Nikko.

I was going to leave Japan after another day of work, so this also turned out to be my last photo from Japan on that trip.