We landed in Kochi in the morning of May Day and immediately began our drive to Munnar. I looked at the driving directions on Google maps as I waited for the baggage to arrive. So when I met our driver, Shankumar, I was able to suggest that we go off the highway at Neriamangalam, by veering right on to the Neriamangalam-Painavu road. This runs south of the Periyar river. So, instead of crossing the river at Neriamangalam, we would cross it much later, at the Panamkutty bridge. I was so very specific because as I looked at the map I discovered something called the Kudakkallu, which a quick search claimed to be a megalith. Shankumar looked sceptical but followed the map. The picturesque road wound along the south bank of the Periyar river, about a hundred meters above the river bed.

Kudakkallu is a Malayalam word which means umbrella stone. It wasn’t too hard to find. The spot is fairly accurately marked in Google maps. When the GPS showed that we were at the megalith, we asked people about it. Neither The Family nor I speak Malayalam, so conversations were carried out with Shankumar as a translator. Everyone knew about the umbrella stone, and a shop owner said he would show us the path. We waited at the shop for his wife to relieve him. She brought along their two children. 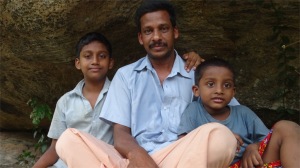 Shankumar was not into such mad pursuits. He decided to have a tea at the stall as five of us started off: The Family and me with the stall owner and his children. We walked a hundred meters down the road and then climbed down to the river. The older child, Alan, knew English and translated for us. The path was steep, and in the muggy weather I was soon dripping with sweat. The last bit involved clambering around a huge boulder. Then as we emerged behind it we saw the giant megalith. The photo at the top is the first view of it: the people near the base provide a scale.

The stone is at the level of the Periyar river. I walked around it and clicked the photo of the river which you see above. As I walked around the base of the stone, I found fairly regular markings on it (see detail above); could they be chisel marks? I could not find an easy answer on the Archaeological Survey’s (ASI’s) website. The kudakkallu which the ASI site shows are different in form and much smaller. Those are iron age tombs (variously dated between 1000 BCE to 200 CE). This one is in Idukki district and not listed, except possibly in this Kerala Tourism site. Given the horrible state of documentation, as I discovered later, on prehistoric sites available publicly on the web I’m not surprised. 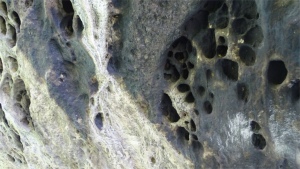 Another puzzling feature of the stone was these holes high up on the south-eastern base of the stone. Are these natural erosion features, or are they man made? We walked around the base of the stone, taking photos. Both photos of the details here are from the south-eastern part of the base. Our young guides ran off to splash some river water over themselves. When they came back, they sat below the northern overhang for the group photo here. You can see regular (tool?) marks on the stone behind them.

Who made this enormous monolith? Why? I guess the answer is not known, but I wish I could find a little more about it than I have. 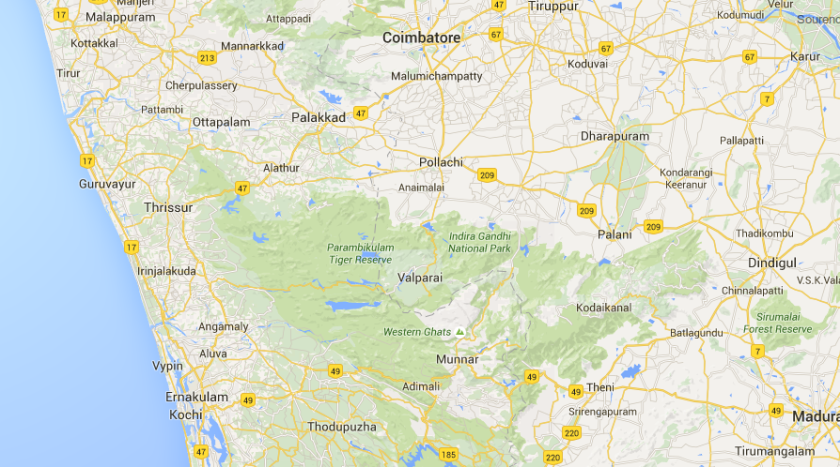 April is pretty cruel over most of the Indian plains. Just the right time to head to the hills. Unfortunately the Himalayas are a little too far for a quick trip, and the Sahayadris are not high enough to provide a respite from the hot and humid weather in Mumbai. Our thoughts turned to the region where we spent a nice weekend about a year back. We just heard about Valparai, booked a hotel, and went off. So now, we looked at the map and realized that we had found an area ripe for summer.

The hot plains towns of the south, Kochi on the Kerala coast, Coimbatore and Madurai in Tamil Nadu, form a tringle of entry points to the wonderful hill towns of the Western ghats. The most well-known of these are Munnar in Kerala and Kodaikanal and Valparai in Tamil Nadu. Forests, now protected, rise from the plains at the foot of the Ghats to the elevation of around 1500 meters, which is about the altitude of most of these hill towns. They still hold spectacular species of animals like the Nilgiri Tahr and lion-tailed macaques, along with such a variety of birds that just thinking of them puts a shine in The Family’s eyes. When you peer deeper into the map you find more half-forgotten names from your long-ago school days. There is space here for a lifetime of summers. We will be scratching the surface with a weekend’s trip.

So where do we go? Kochi to Munnar or Madurai to Kodaikanal? Any tips?