I had emails from colleagues in Wuhan. The city was isolated around the time of the Chinese new year, when some families had left on their annual holiday, and others were preparing to leave. Those who had not left have now been confined to their flats for weeks. I remembered several months ago when I was in Wuhan, perhaps not long before the novel virus crossed over to humans. I’d gone for an afternoon’s walk along the Yangtze. This is a place where mothers and grandparents bring their toddlers, and retirees come to chat or fish. 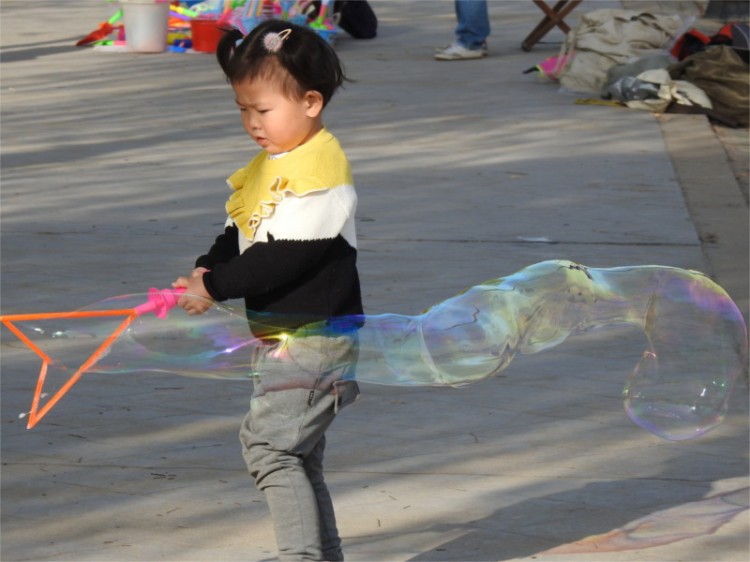 The path was hazarded by children running and stumbling. Several of them had bubble makers with them and were busy spinning out long bubbles. I wondered if it is possible to make a toy which blows bubbled shaped like doughnuts. I don’t think the little girl in the photo had anything on her mind apart from blowing longer and longer bubbles. 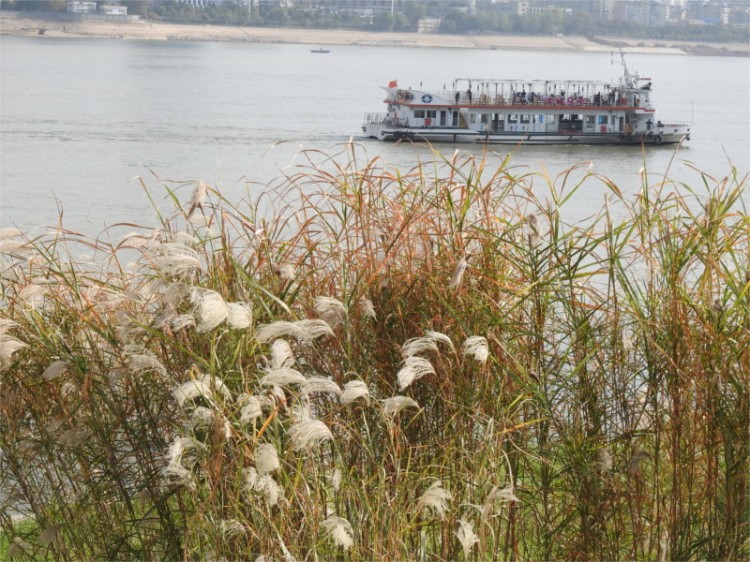 It was a pleasant and sunny winter afternoon. Novembers can be rather cold in this part of the world, but this was an unusually mild November, with the winter sun warming my jacket very pleasantly. Boats glided past on the river, its banks loaded with tall grass at points. I love the sight of this kind of grass: it reminds me of a scene in a movie by Satyajit Ray where a boy and his elder sister run through such a field to see a train. 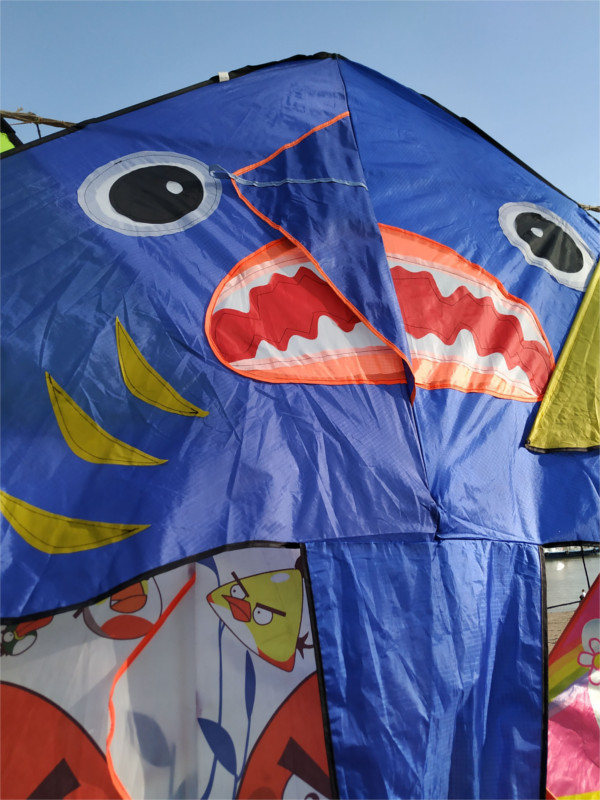 But what really attracts me here is the variety of kites on display. Often they are the standard rectangles and triangles, some with long tail streamers. But they are wonderfully decorated. A lot of them have pop culture theme: dragons from one of the most popular movies of 2010, angry birds, Tweety, as well as anime characters which I don’t recognize. They are clearly aimed at the younger end of the crowd.

I watched several in flight. Some of them were being flown by a single person, but several involved a whole family. A child, grandparents, mother. It struck me that like in India, kite flying is more a boy’s and men’s sport in China. Women are involved, but the boy or grandfather take on leading roles. Why is that? 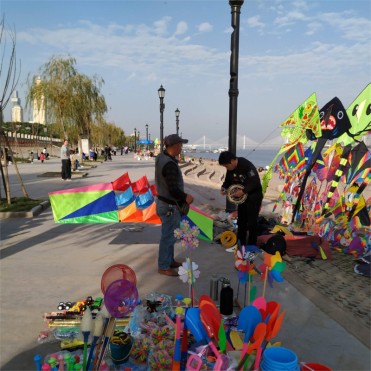 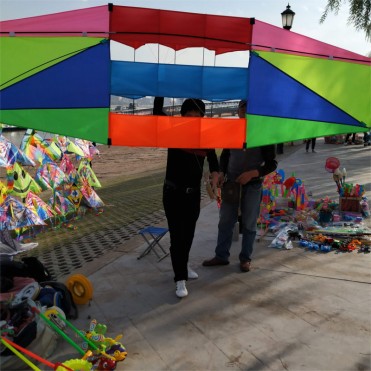 Among all this was a delightfully more complex kite: the box kite that you see in the photos above. I’d never seen a box kite when I was young, and what I read of them never led me to successfully build one. So now if I see one I’m entranced. I stood and watched as the kite seller and the customer handled the kite on the ground. As it soared up I stood to watch. I suppose afternoons are not so pleasant in Wuhan in these months.

Who goes to watch birds in Hampi, you might ask. I might cough in embarrassment, me, The Family, a handful of others. Whatever for, you might persist. Then I would have to tell you that spotted sandgrouse (Pterocles senegallus) have been spotted there, and if one is lucky, this might be the easiest place to spot them. And if you persist in asking whether we did, the true answer is that we didn’t. But we saw more. Like the bird in the featured photo. 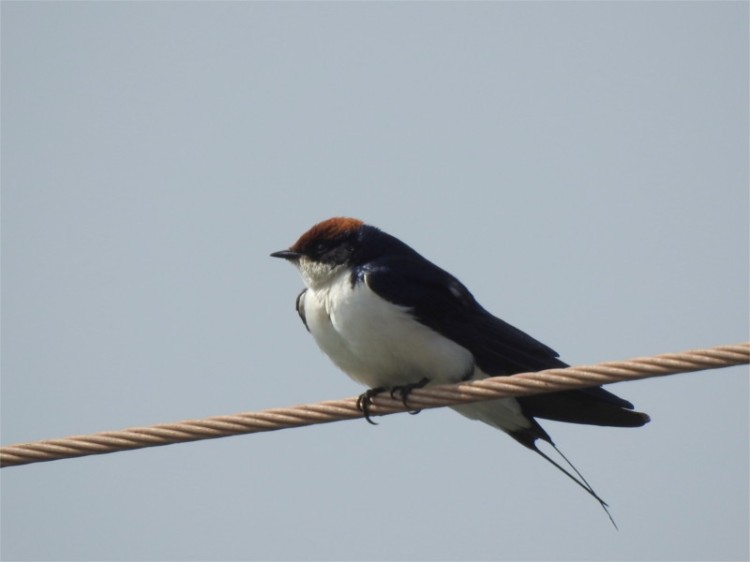 No that can’t be right. Sorry, that was just a kite that someone was flying in China. No, I meant the wire-tailed swallow (Hirundo smithii) that you see in the photo above. I’ve only seen them flitting about in the air before, and learnt to tell them by their unmistakable wire-tailed profile. I hadn’t ever had such a good view of a sitting bird. The light showed the rust on its head very well. The blue upper feathers are in shadow and look nearly black, so there is scope for a better photo in future. If you have seen clusters of mud bulbs hanging below bridges over clean rivers, they are usually the nests of these swallows. I used the word clean very deliberately, because the presence of these nests has been proposed as bio-markers for non-polluted water.

Is that all? No, we did get to see a few more birds. More about them later.

I’m always amazed by how much of a dedicated following kites have in China. Kites are a children’s pastime in India, and kite fights the ultimate competitive sport for some. There is esoteric school-kid knowledge about how to coat the string with ground glass, saw at another fighter’s string in the air, escape traps, create them, which kept some friends fired up. But most people outgrow them as they grow up. Budgets being limited to a school child’s allowance, Indian kites have not grown beyond basic paper squares stabilized by a tail, and the cane spinneret has certainly not evolved since my childhood. So when I saw the sleek gadget that the man in the featured photo holds in his gloved hand, I was entranced. 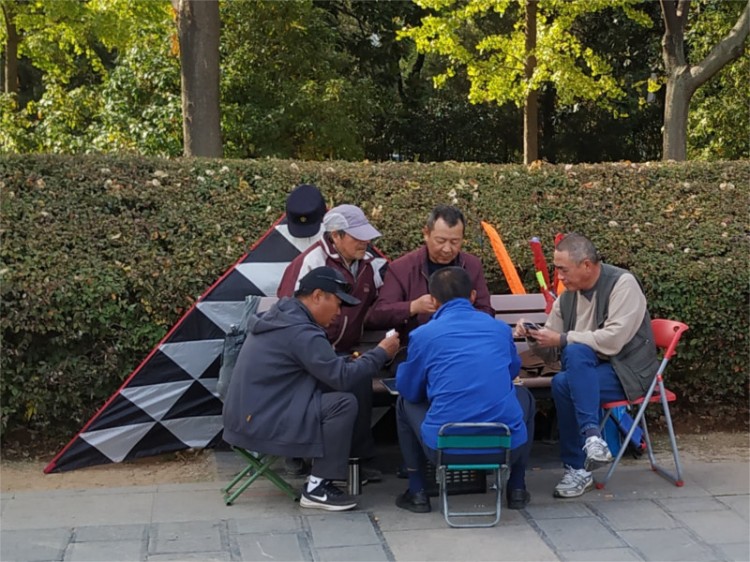 But then, on further thought, this evolution is natural. Kite flying is a big thing in China too, but here it is an adult pastime as well. The money available for innovation and attention paid to kites is a different magnitude. The kites are large and can be complicated. I watched a group of enthusiasts gather in the garden in Nanjing which used to be the Ming palace six centuries ago. They came with their big kites, heavy gloves, and other paraphernalia. I watched as they put together the equipment. Telescopic metal frames, and lightweight fabric for the kites, comfortable spinnerets, nice gloves, a little game of cards (always a must in China), and then they were ready to fill the sky with darting and colourful shapes.

Chinese tradition says that kites were invented by two Confucian scholars, Mo Zi and Lu Ban, in the time of the Warring States (5th to 3rd century BCE). Tang-era (7th to 10th century CE) stories talk of flying kites for pleasure, and Ming-era (14th to 17th century CE) documents talk of the art form that kites had become. I was happy to dedicate a little part of my afternoon to watching an ancient Chinese custom.

When I first left the town that I still think of as home, I would sometimes be overcome by nostalgia about the unlikeliest of things: a little corner shop which would take ages to serve samosas, impassable traffic on roads which would even force bicyclists to take alternative routes, a bunch of quarreling labourers who would spend an hour before dinner drinking and playing cards in a little alley, a shop which would stock all the treasures of a school kid’s life (scented erasers, fidget toys, Phantom comics). Walking along the roads of Nanjing I found the streets familiar in a strange way: if I’d grown up here I could miss it horribly. A simple dumpling soup? Of course I could become nostalgic about it. 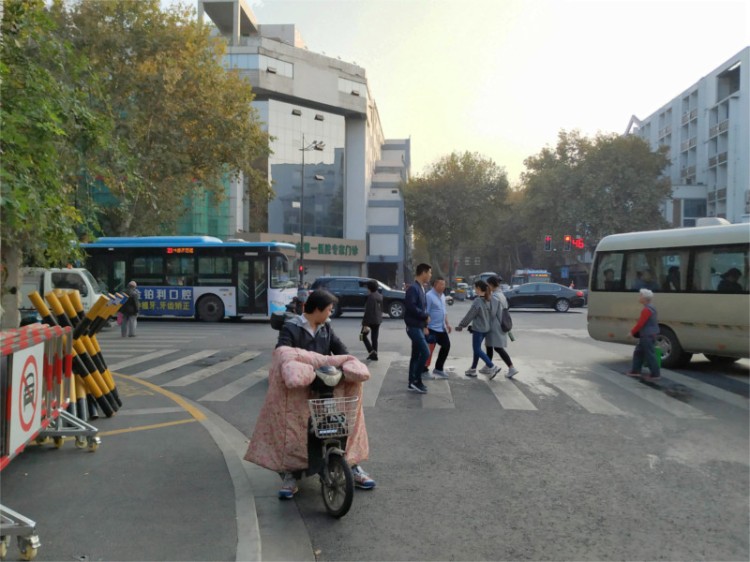 The streets were not as crowded as those of my childhood, but China has managed its infrastructure to expand with its growth. There are still traffic jams in the large cities, but the traffic does flow. The one parallel with the ancient imperial city I grew up in was the inability of different kinds of traffic to stay away from each other. The lady in the scooter jacket was talking to her very young daughter, who was riding pillion. As I took this photo the child turned and was hidden completely. I realized at that moment that the pillion rider does not need a jacket. 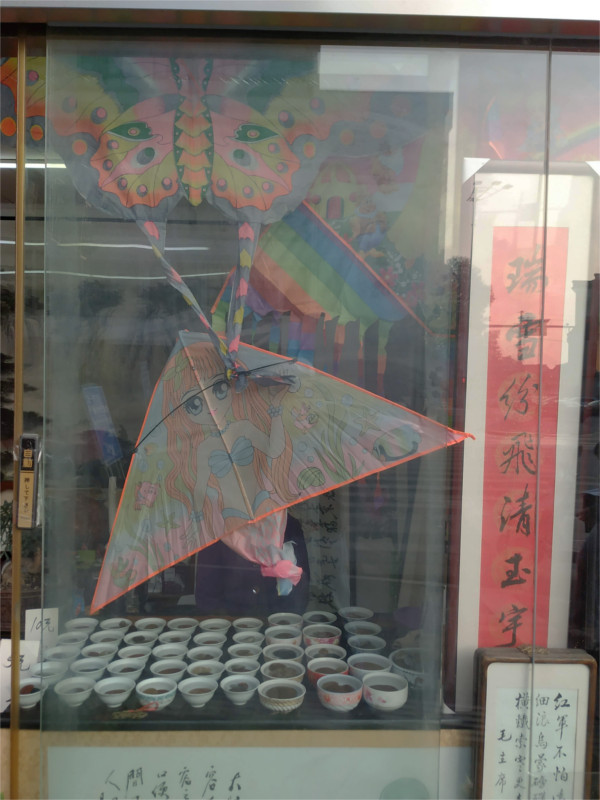 I took a photo of this shop window in passing. Sometimes when I’m chasing the light, as I was doing on this walk, I don’t have the time to stop and examine things which look interesting, so I keep taking photos with my phone. I’d tried, unsuccessfully, to describe to The Family the atmosphere of streets in Paris and Geneva when I was an impecunious young man. Nowadays, photos serve better. When I showed her this photo I realized that it was an artists’ shop: the bowls hold paint and the kites are painted. I would love to go back, it looks like a magic shop of my youth. 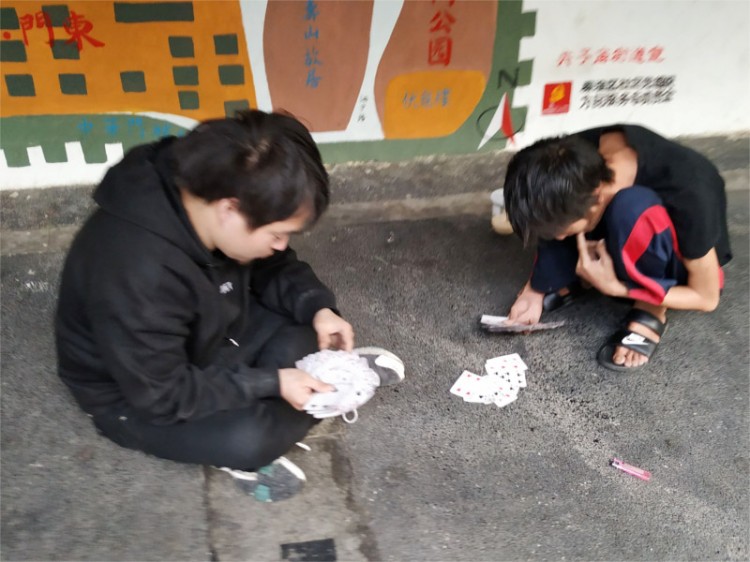 These two young men on the sidewalk trying to figure out some card game could well be the kind of unlikely thing that sticks in one’s memory. I’ve tried to develop a method of stealth shooting with my phone. It needs some work. Sometimes I get a good shot when you take an unobtrusive photo on your phone as you walk past a group of people, but the composition is totally unpredictable. 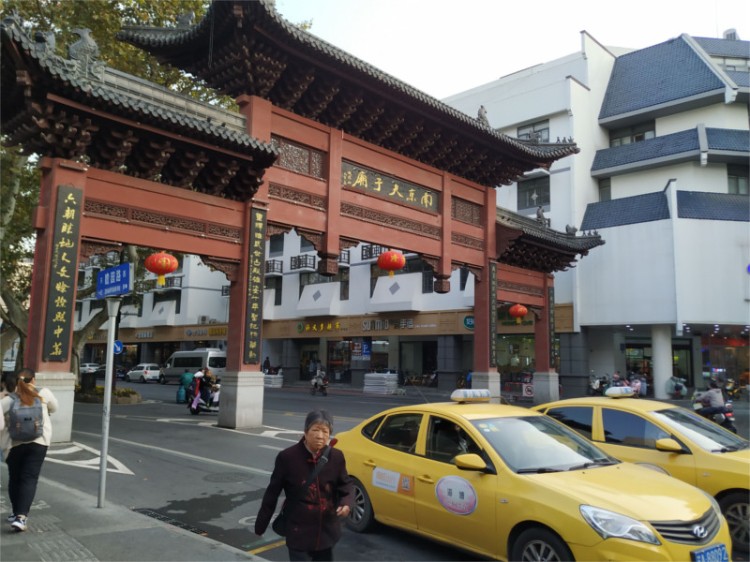 Back in India the next weekend, I was having dinner with a colleague and a good friend, who turned out to have gone to school in Nanjing. The Family and I encouraged his nostalgia (we are incorrigible tourists) and I was happy to find parallels to my memories of growing up in a smaller town. Discovering a common humanity is part of the fun about travelling: in two culturally disparate countries, divided by the wall of Himalayas, our personal experiences ran parallel. 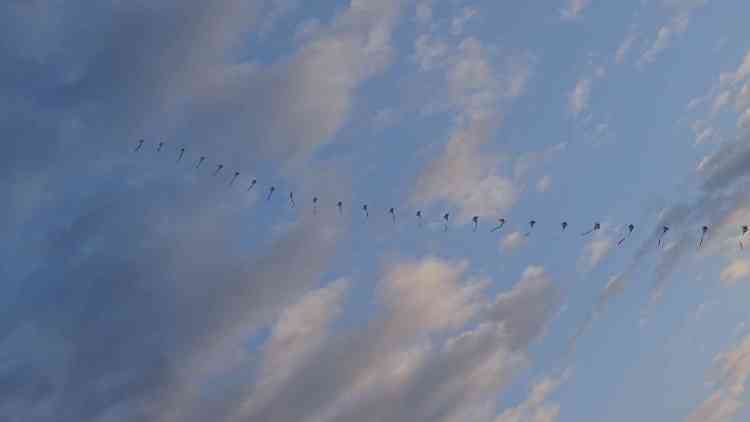 When you travel for pleasure it is usually because you want to see something different: different people, different sights. So it is for me. It is delightful when I see something which I have not seen before.

On our first walk through Beijing we saw the wonderful sight of a line of kites flying together. That’s not something we are used to in India: where kites are flown as a competitive sport. Each person who flies kites tries to cut down others. A long time ago, when I was a school boy, I would spend hours planning the mixture of glue and finely ground glass which would be coated on kite strings to enable them to cut others. The sight of a line of kites floating serenely above us was a quirky sight, which brought smiles to our faces.

We followed the line down with our eyes, and found that it was an advertisement attached to a little food stall! What a lovely idea, we said to each other. China invented kites after all, it stands to reason that they would have had centuries to think of uses for them.

The Family said, “Would they know that we have a kite festival day in India?” I don’t know. Perhaps that thought could bring a smile to Chinese faces.