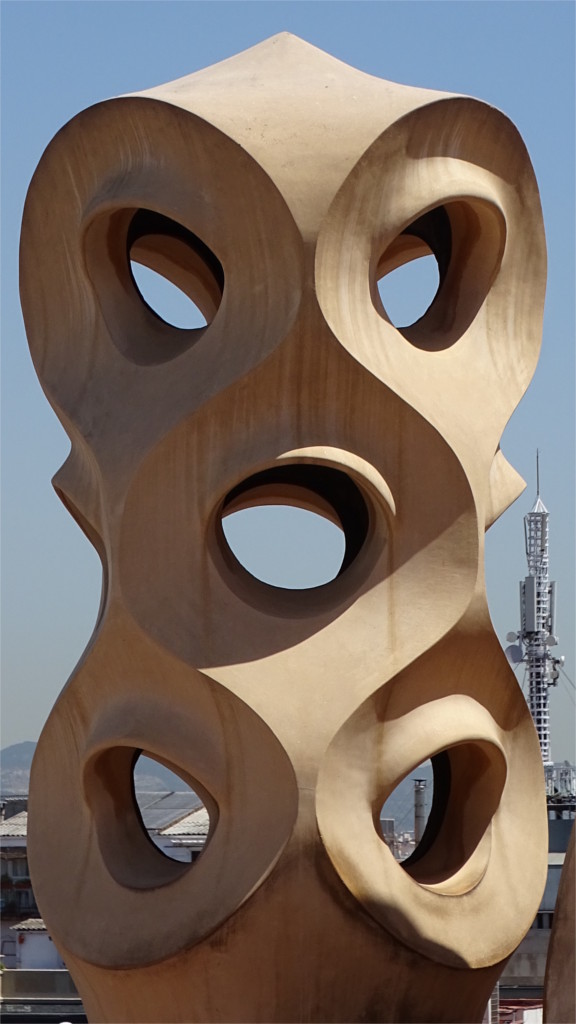 By many professional measures Gaudi was an unsuccessful architect. His best-loved works are the few public projects he undertook. His designs for houses had few takers. Why did his modernism not have a market? In the decades when he was designing modernist projects which failed, elsewhere in Europe Art Nouveau and Jugendstil were spawning commercial success. We went to one of Gaudi’s few successful building projects to find out what it was like inside. This is Casa Mila, located just off Barcelona’s famous shopping avenue of Passeig de Gracia.

The atrium was full of light. The floor was covered in trencadis mosaic, the iron gates were in typical Art Nouveau style, and the bottom of a staircase was covered with a mural in delicate pastel colours (which is not original). One architectural innovation which can be seen here are the pillars. They largely carry the load of the six storeys high building. In 1906, when the construction began, it was supposed to be a radical innovation, allowing interior walls to be free of load.

As a result of being built around an atrium, the interiors of flats are full of light. The doors and windows are made with the flowing curved lines which reflect the aesthetics built into the walls. It is said that Gaudi paid as much attention to the handles on doors as in the architectural design.

The furniture was also specially designed. The flat which is on show has reproductions of the furniture that was made for the original flats. These are typical Art Nouveau pieces. I wouldn’t mind some in my flat. As you can see from the photo above, there is no lack of light in the rooms. The main problem that customers faced was the lack of straight lines in the walls. As a result every piece of furniture had to be specially made for the building. When you see the kitchen or the bathrooms you are immediately struck by this realization.

I looked up at the ceiling and was amazed at the detail there. I’m not sure that I can sleep in such ornate rooms, but the aesthetics of that time could have been different. Apparently owners began to change the furniture and colours inside the flats as soon as they could. By the time the house was declared an UNESCO heritage structure, internal and external changes were so many that it was hard to restore the original colours. As a result, I’m not sure whether this ceiling, for one, now looks as Gaudi wanted it to look.

The facade of the building is very distinctive. The rough and unfinished look gives it the local nickname, La Pedrera, meaning the quarry. The intricate iron-work grilles on the balconies are remarkable. But the most remarkable part of the building is probably the roof, with its fantastically shaped chimneys and flues. The alien in the featured photo is one of these.