Head out of Mumbai, pass the Expressway and its food courts, and you soon come into impressive weathered hills. Strange shapes rise out of the land. Pass Pune, and head South, and you begin to see ranges of hills with a very characteristic feature: they seem to form gigantic layers or steps.

If you look carefully at the far, mist covered, hills in the photo alongside you see these characteristic layers. They are volcanic features called “trappen” in Swedish, meaning steps. Successive volcanic eruptions created these layers.

A closer and clearer view of the steps is in this photo taken at the Thosegarh waterfalls south of the town of Satara.

These layers are called the Deccan traps. It is thought that thirty thousand years of continuous volcanic eruptions laid down these layers of basalt over a huge part of the Indian plate. This happened while dinosaurs still roamed the earth. Since then the volcanic rock has worn down to a half million square kilometres area in the Deccan plateau.

This is the geology within which the Kaas and neighbouring kilometer-high plateaus stand. Over millennia, the basalt was weathered down by successive dry and wet seasons until it is a porous rock.

You can see the weathered rock, called laterite, in the featured photo. Over this laterite is a thin layer of red iron-rich soil called lateritic soil. You can see in the photo alongside how poor the soil is. The grasses and the low herbs of these plateaus, including Kaas, barely manage to hold the soil together. Of all the things that damage this fragile ecosystem, tourists are the worst, although the construction of windmill farms and extraction of bauxite also harmful. Reading about this area, I discovered the word "inselberg", meaning island mountain. It is a very apt description of these plateaus: each stands isolated from others. The flora of each of these inselbergs is different from that in the surrounding lowlands. Environmental degradation of a plateau is like killing off the ecology of an island. It seems that of the 850 odd species of herbs identified here (including genera found only here), more than 600 are on the IUCN red list of threatened species.

The ministry of the environment lists many benefits that these ecosystems provide, including medicinal plants. 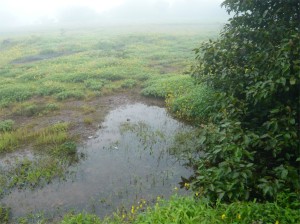 Another ecosystem service provided by this fragile system is the recharging of the surrounding water table. As you can see in the photo here, the grasses and herbs trap water into little monsoon pools. This water is then absorbed by the spongy laterite rocks. In the absence of the flora, the water would run off too fast to be soaked up. The average annual rainfall here is between 2 and 2.5 meters, so this is quite a service!