I had a rainy afternoon free in Hefei after my work was over. The Family and I decided to go downtown to the pedestrian Huaihe Street. There were two things to see here, and one of them was called the Former Residence of Li Hongzhang. I learnt that Li Hongzhang (1823-1901 CE) was a farmer’s son who rose to become one of the most important ministers in the Qing court. In charge of home and foreign affairs, he was involved in the humiliating treaties imposed on China in those years, and came to see modernization as a necessity. His “Westernization movement” is viewed in China today as one of the key points in modern Chinese history. I was unaware of any of this when we passed two stone lions and walked into the one traditional house in a row of modern shops.

The complex is now protected as a historical monument of interest by the provincial government. We bought tickets at the gate and passed a courtyard into the front hall (photo above). This was a typical formal seating area, with heavy dark chairs pulled into a rectangular arrangments, with lights placed just above them. I liked the ornate mirror in one corner of the hall. In the gloomy light of a heavily overcast day, this was a bright spot in the black stained wood of the room.

Another courtyard separated this from the central hall. This hall is now the main exhibition hall on Li Hongzhang. The exhibits were labelled in both Chinese and English. I found the exhibits very instructive, and The Family and I spent some time looking at reminders of 19th century life, and the changes that Li Hongzhang tried to bring about. A beautiful screen in the back wall of this hall looked out into a blank brick wall. I was a little puzzled by it.

Crossing this wall we came to the Zoumalou building. This two storied structure seems to be the place where the family lived. We climbed the stairs and peeked into the large bedrooms laid out with period furniture. The halls below had more exhibits. We liked some beautifully embroidered coats, and spent a while looking at the ink-stones in the gift shop.

Behind this a little garden has been recreated. The museum has been careful about restoring the central hall and the Zoumalou building. I don’t know whether equal care has gone into making sure that the garden represents Li Hongzhang’s time accurately. I liked the door in the back wall, with its typically Chinese aesthetic of being overgrown. Much care is needed to make sure that nature does not actually take over. 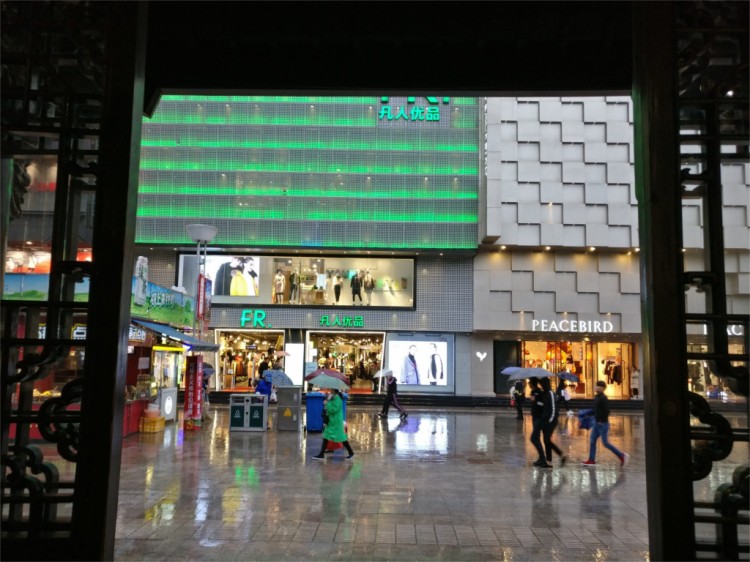 Exiting from the museum to the busy Huaihe Street was a bit of a shock. But then I realized that this is what the museum is really about: the late Qing period that is on show here is the doorway between the isolated China of the 17th and 18th centuries and the dynamic country it is today.