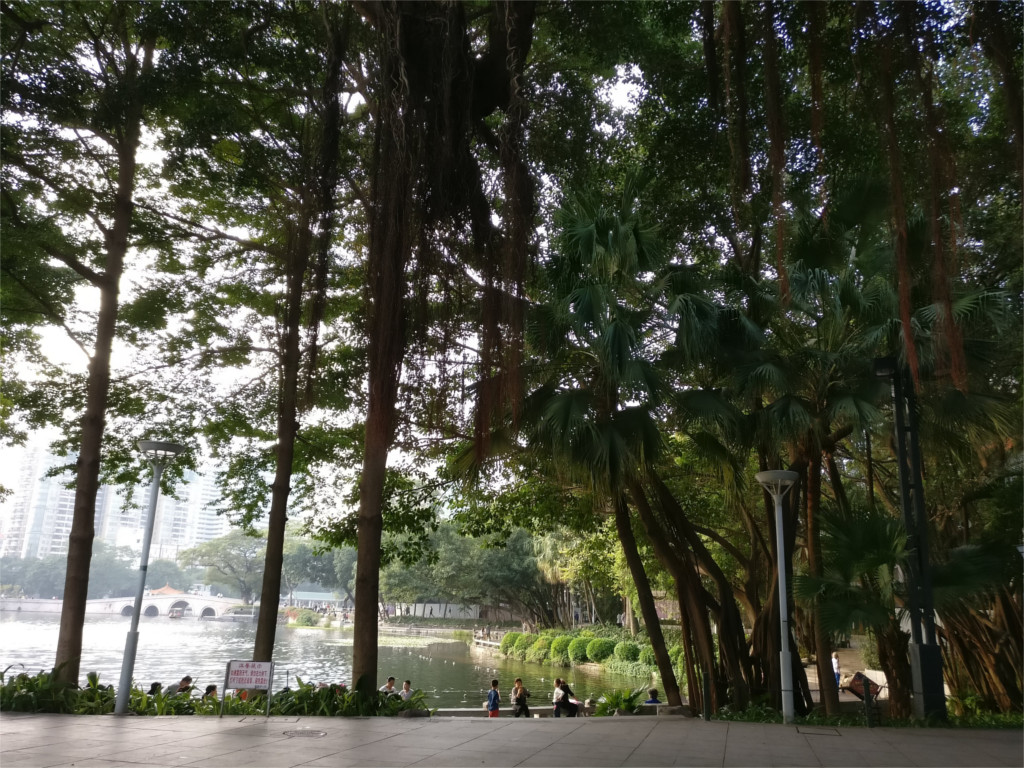 On our last day in Guangzhou my flu was at its peak. I slept all day in our hotel room while The Family explored the parts of Liwan district that she’d wanted to go back to. At three in the afternoon I woke feeling better, and we decided to go have a small snack in the historic Panxi restaurant, and explore the Litchi Bay scenic area around it. This involved a walk down Enning Road, which was charming enough that we didn’t mind doing it again. 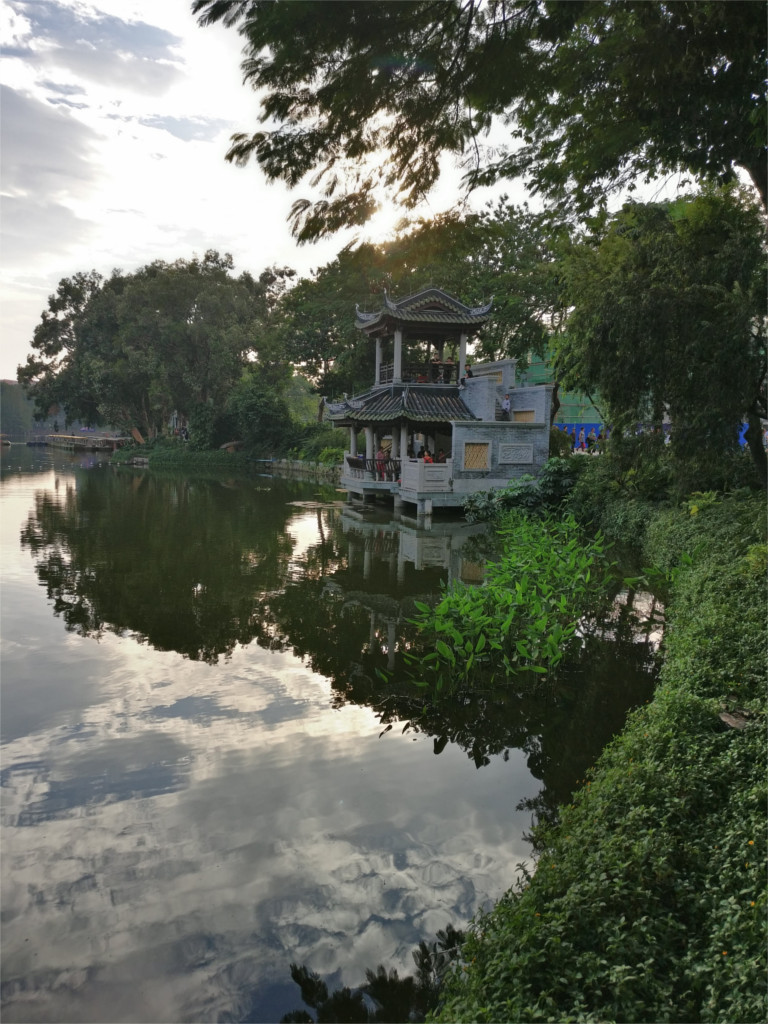 The “scenic area” was a sprawling garden between two canals connected to the Pearl river. A few days ago we’d spent our first evening in Guangzhou loitering by the Pearl River in Shamian Island. We sat down below the massive trees which you see in the featured photo and talked about how we’d been next to the water during every sunset in Guangzhou. 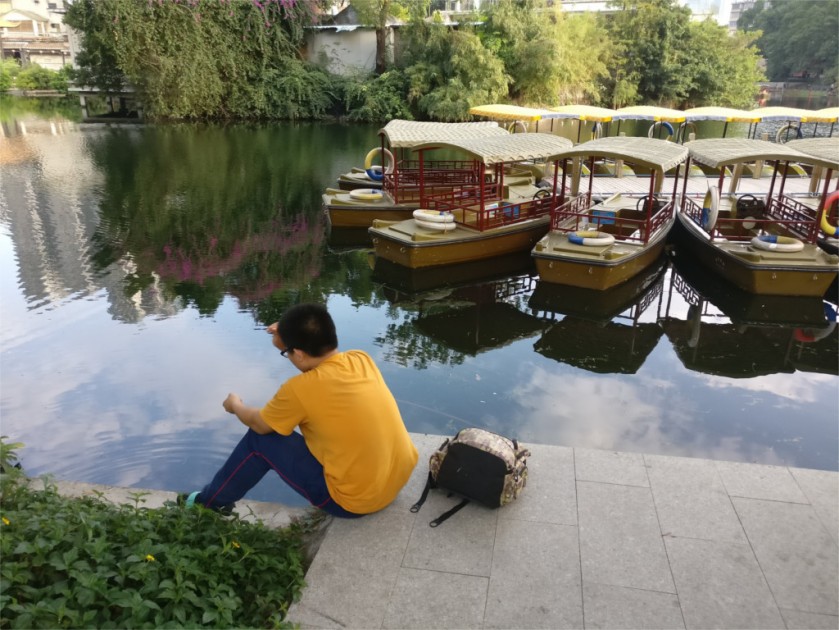 If we’d come here earlier we might have been able to take a boat through the canals, but right now they were coming in to moor. We stood near the jetty and saw little nuclear families of China disembarking, little children excitedly running around as soon they got off the boat. Streetlights were slowly coming on, and we had to begin thinking of our dinner. In China this was already past dinnertime, and most people were thinking of their post-dinner entertainment. 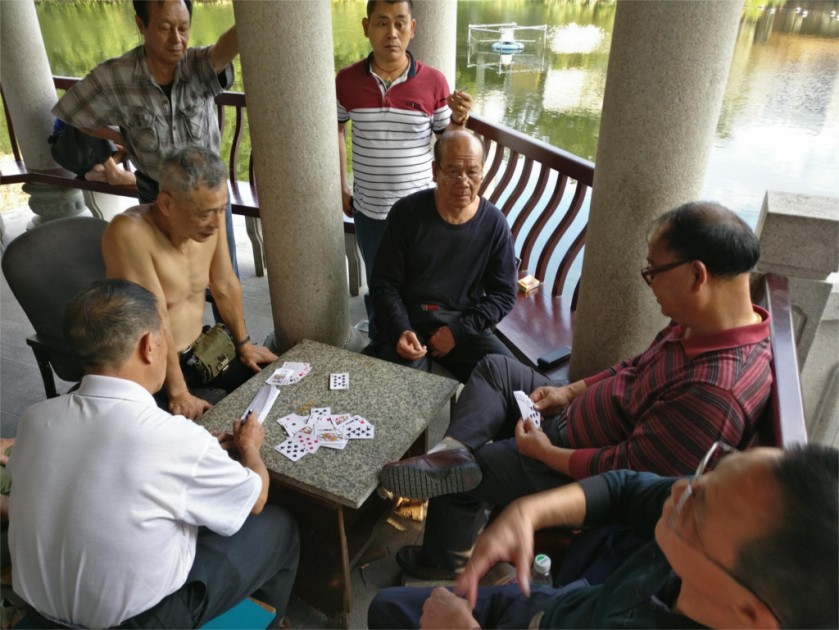 The Chinese middle class seems to have more leisure time than in India. A group of friends playing cards (or some other game) together in the evening is not uncommon at all. Not all the people in this group seem to be retirees. Also, Chinese cities, even vast cities like Guangzhou and Shanghai, have lots of gardens and open areas where young children can run around playing. This is so very different from the daily experience in a city like Mumbai. China, for all its different political system, has been building a comfortable lifestyle for its middle class. The disposable income of the middle class definitely exceeds twice that of their Indian counterparts, resulting in much better quality of goods and services in their cities. The public transport, and the entertainment areas are just two aspects of this difference. 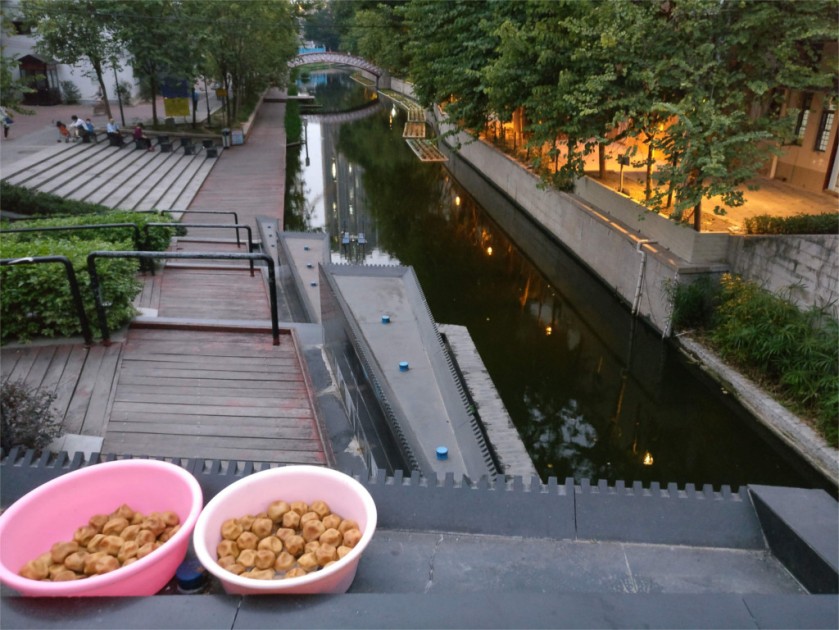 This has been done without sacrificing a traditional lifestyle. We discovered basins of fruits drying in the sun by the roadside. It was such a wonderfully domestic sight on Enning Road. We stood there and watched locals wander by, probably talking to each other about the odd foreign couple looking at nothing in particular. 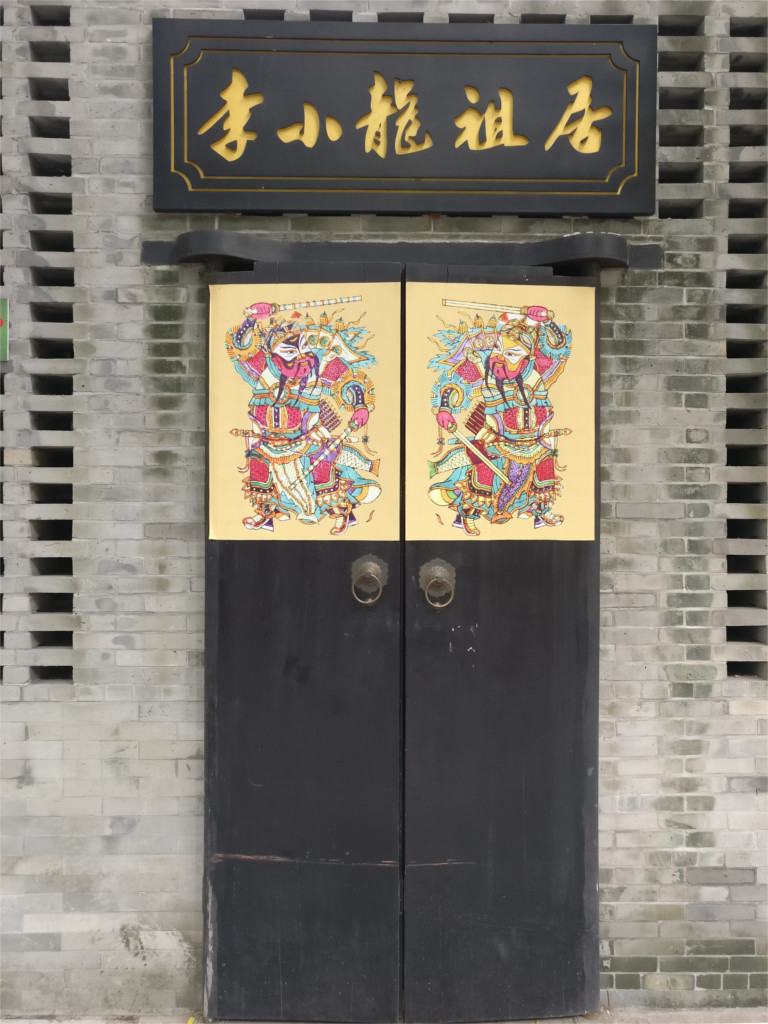 Earlier in the evening when we walked past this very ordinary door, I did a double take. There are really two ferocious dwarpalas guarding this house. The brickwork is common in this area. I never gave in to my great desire to scratch at the brick to find out whether this is just cement paint over red fired clay bricks (which we saw in the Yongqing Fang complex) or cinderblock bricks. If you happen to know, please let me into the secret in a comment.

This cannot be an everyday sight even in Guangzhou. The guy in the chicken costume was playing a little flute and saying something. I suppose the explanation is fairly mundane, perhaps an advertisement for a restaurtant, because in spite of this outlandish costume he didn’t seem to attract too much attention. It is common in China for people to stand outside shops and shout out to passersby to attract them; sometimes walking down a commercial street feels like a war on your ears. But this was pretty unique. 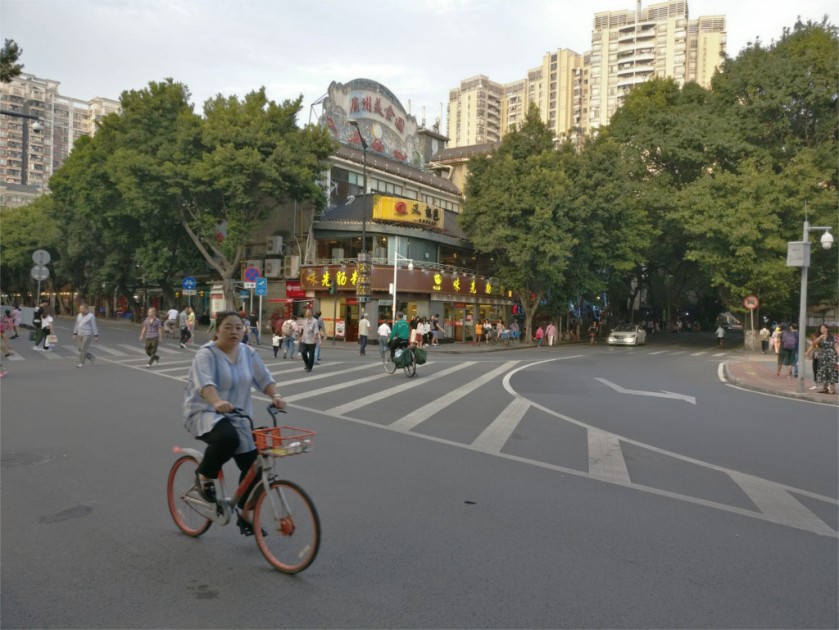 We briefly considered walking into that fancy looking restaurant across the square from Panxi. It seemed like a welcoming place. But I was too tired to cross the road. I stood at the corner and took a few photographs. There was a dinner-time quiet, very few cars on the road, and not too many people. Bicycles are not as common today as the iconic photos of Chinese roads from the 1960s and 70s could lead you to believe; but in the Liwan district I found many people on bicycles. Maybe I’m imagining things, and a quick look at statistics would prove me wrong, but it seemed to me that electric scooters are more of a thing in Shanghai. In Guangzhou bicycles are still preferred to these electric scooters. 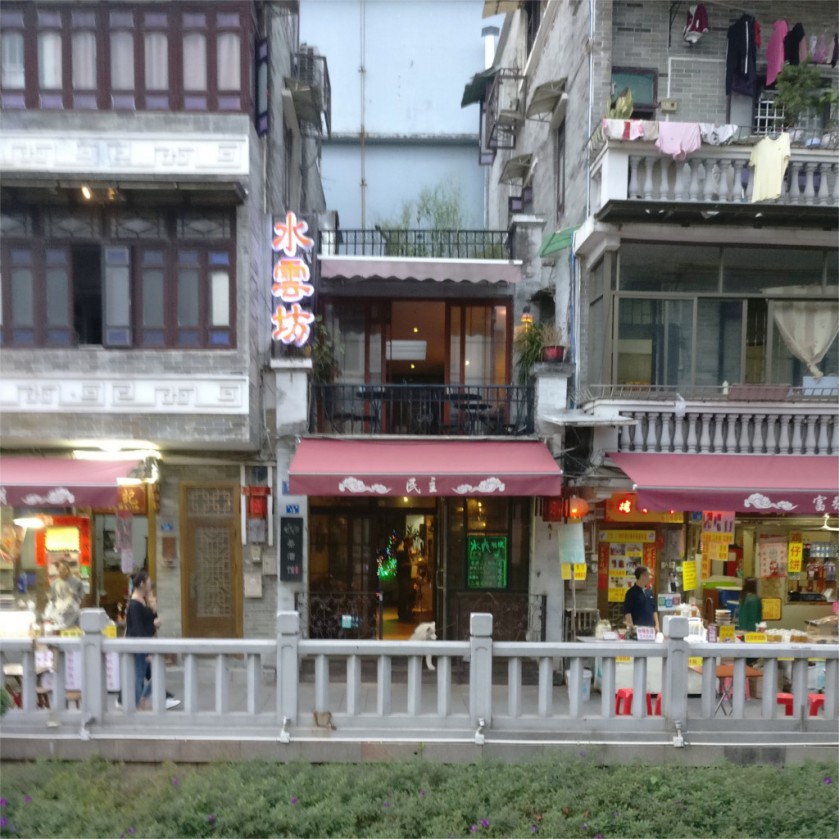 Coffee is relatively expensive in China, but I like a shot of espresso in the late afternoon. We found a nice cafe next to a canal and sat down with a cup each and watched the restaurants across the canal slowly fill up. Since it was our last evening in Guangzhou we talked about what we’d missed (all the memorials and museums related to the Republic) and the wonderful unscheduled things that we had seen. When we chose to stay in Liwan district we had some inkling that we would see the China outside the guide books, but we had not expected to be so thoroughly charmed by it.