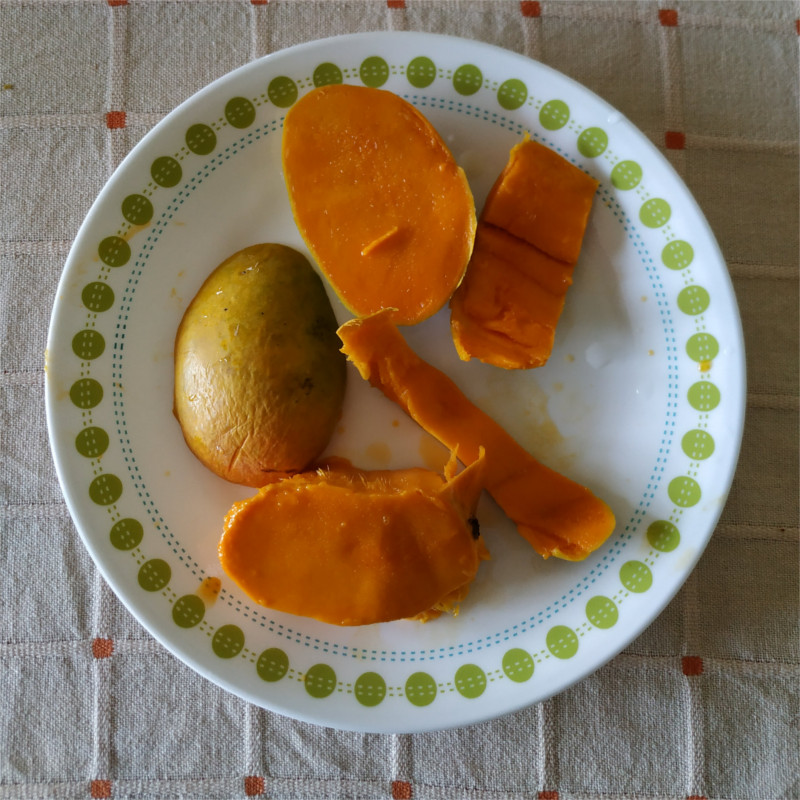 It has become a near-daily ritual to exchange photos of our food with the family. Strangely, now that we are physically distanced from each other, we know more about each others’ daily lives. After I shared the featured photo, an undistinguished apoos (Alphonso, so called by the Portuguese, after Afonse de Albuquerque), I was bombarded with photos of its better pedigreed cousins. Sad to say, our local vendor only has these unblushingly green skinned apoos. With the restrictions we have, the two of us are unwilling to try to finish a crate of six dozen which the better ones are packed into. As a result, it has been a year since we saw the beautiful rose-coloured Ratnagiri variety.

On the other hand, I’ve never kept such a close watch on the friendly neighbourhood mango (Mangifera indica) tree before. Here is a record of the development of the mango from April 11 to May 17. I missed the first stage, the growth of the flowering stem and the initial budding. The earliest photo I have shows the opened flowers. Then, the mature stage of flowering, when some have already transitioned into fruits. Each inflorescence holds both male and hermaphroditic flowers, and only the latter develop into fruit. From the second and third photos you can see that most of the flowers on the inflorescence were male; few develop into fruits on each flowering stem. If this were a cosseted orchard tree, with enough nutrients and water poured around the roots, then most of these growing fruits would mature. In the wild, usually at best one fruit eventually remains on each flowering stem. The one you see in the fourth shot will drop off the tree in another month, unless a bird gets to it first.