As I read the news about the weak polar vortex which is responsible for the abnormal, and abnormally long, cold weather as far south as Mumbai, I was reminded of the time when the tail end of the world’s most extreme weather hit me in the face, and I didn’t recognize it till later. A few years ago we visited Meghalaya at the end of the monsoon and decided to drive down from Shillong to Mawsynram. The village of Mawsynram is known to every Indian from their school days, since it is supposed to be the rainiest place on earth. It usually receives between 11 and 12 meters (yes, that’s meters; 430 to 470 inches if you prefer) of rain a year In 1985 it received 26 meters of rain (over 1000 inches) of rain.

The monsoon was just over in the rest of the country, but we’d seen storms and heavy rain while flying in to Shillong. I asked The Family, “What’s there to see apart from the village?” We consulted Raju, who was driving us, the web, and the hotel, and found a couple of cave systems and waterfalls. Meghalaya is famous for caves and waterfalls; although they are everywhere, the more famous ones are worth seeing. The recommendations were enough to tip me over into going along with The Family’s plan.

A heavy mist descended as we drove along the Shillong-Mawsynram road. The surface was pretty bad too (at least then) so between the mist and the road, Raju had to slow down quite a bit. We stopped a bit at a Khasi sacred grove to look at monoliths raised to the memories of ancestors, but after that the mist began to get heavier. Usually we could see a little way beyond the edge of the road (that’s how we spotted the group of cows having their mid-morning snack). Now and then we would hit a pocket which was fairly clear, like the stream in the photo above.

By the time we got to the Mawjymbuin caves it was well past the normal time for lunch and we were enveloped in very thick mist. The caves are meant to be open all day, but the person who mans the gate and collects tickets was not at his place. We walked in hoping to see him on the way out and realized that the mist had cut off all light inside the cave. We could vaguely see exotic shapes of stalactites and stalagmites, but there definitely wasn’t enough light to negotiate the slippery rocks. We walked around the caves outside, looking at the pools of water large enough to serve as swimming pools. A light drizzle had begun, and we came out. There was only one restaurant nearby, and it could serve jadoh, Khasi for rice and meat, or ja with eggs. 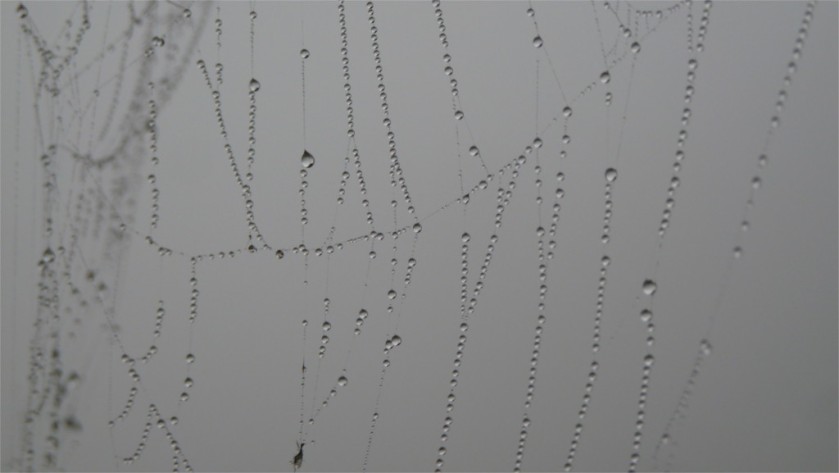 I looked out of a window at the back of the hut, and saw that we were at the side of a small stream. The fog was too dense to make out clearly what was on the other side. It looked like a wooded slope. As I took the photo, The Family discovered a wonderful sight out of another window: a spider’s web on which the mist was condensing. We had our meal, and a good strong chai. The lady who served us food suggested another cave system which wasn’t too far. Raju knew of it, but said he preferred not to drive in this light. We paid up, thanked the lady, and left. It was a wasted day as far as tourism went, we thought as we left. Over the years The Family and I came to realize that it was not. In the rainiest place on earth getting heavy cloud cover and a drizzle when the rest of the country was bone dry was exactly what we should have recognized as a great experience. Fortunately, we had photos which could jog our memories. 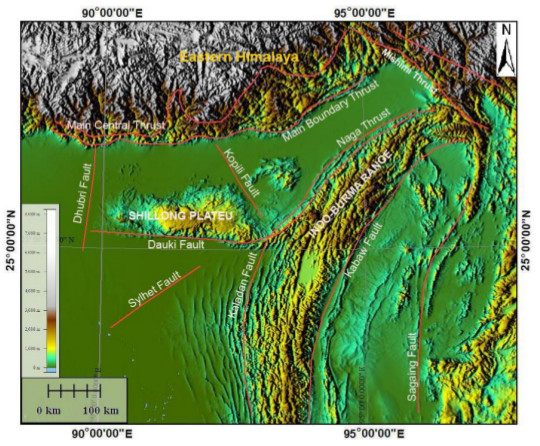 I hadn’t worried about the rains in Megahalaya for years, but recently, while I tried to read some papers on the geology of the Himalayas, I came across an image which explains this well. You see that Meghalaya lies on the so-called Shillong plateau, a 1-2 kilometers high plateau that juts out of the surrounding lowlands. When moisture-bearing winds come off the Bay of Bengal and sweep up north, this is the first rise that they hit. The Bay of Bengal is a warm sea, so the air over it moist even outside the monsoon. Only during cold winters does the moisture content of the air over the bay drop to a point where the southern parts of Meghalaya (land of the clouds in Sanskrit) is not full of megh. Several places on this plateau are among the rainiest parts of the world for this simple reason.