Yesterday evening we decided to get a coffee, walk with it, drop into a shop to buy a replacement charger for a phone, perhaps pick up some bread for the coming days. It took almost half an hour to get a coffee, because the queue was long. A couple in front of me was told that they had to mask themselves if they wanted service. They pulled their masks out of their bags and put them on their chins. We took the coffees out.

The phone shop was so full that they were not allowing more people in. There was a little cluster of people waiting at the door. We went on to the bakery. It was empty; a lone person at the counter served us. This was the only sign that we were in the middle of an epidemic.

The newspapers have been full of the news that Mumbai’s case count is declining, COVID care centers are winding up, and that more commuter trains are running. The anthropause is over. I can now hear the distant sounds of cars from the balcony. The sky is turning the grey that Mumbai’s pollution usually makes it.

The worst of the pandemic may be over, but the epidemic is just smouldering. It can catch fire again. The complacent behaviour which we saw yesterday is just the oxygen that such a fire needs.

Our first plan for the trip to Kenya was to see the migration of wildebeest (Connochaetes taurinus) in Masai Mara National Park. Luck wasn’t with us; the migration happened early. Still, it was a pleasure to see the blue wildebeeste for the first time as we entered Amboseli National Park. I gathered from older literature that in the East African home range of the wildebeest there were both migrant and settled populations. In 1977 Amboseli had 16300 migrating wildebeest, but in 2014 a survey saw only 2400 in the migration. The migrations have been disrupted by a loss of migration routes as once nomadic people adapt to a settled lifestyle with privately held land. There was a collapse of wildebeest population after a major drought in Amboseli in 2009. The bottom was reached in February 2010 when only 10 wildebeest were seen in an aerial survey. Numbers have recovered somewhat since that disastrous period.

In our drive to Amboseli, we’d started seeing a variety of antelopes even before reaching the protected forest, but not the wildebeest. This could be seasonal, since in the wet season the parkland population has been seen to disperse over a much wider area. Our first sighting of this strange but endearing antelope came inside the park. It looked like a cross between a cow and a donkey wearing an elegant designer shawl around its shoulders. A small herd of them were grazing at the side of the road. I took a photo of an utterly relaxed individual chewing the cud while seated (featured photo). In this season there was no lack of zebras and wildbeest; one could spot them easily across the accessible parts of the national park. The photo above shows you very clearly why this particular population is sometimes called the Eastern white-bearded gnu. I was to find out that these very relaxed poses are not terribly characteristic; wildebeest are high strung and skittish, easily spooked.

We took a detour between Jodhpur and the Desert National Park to pass by the now-famous village of Khichan. This is a place to go to if you want to see Demoiselle cranes in winter. These elegant gray cranes, Anthropoides virgo, come to north India for the winter. Khichan became a wintering ground some time in the 1970s when the local Jain community started feeding birds. (Interestingly, the person who started the feeding of cranes remembers the month, September, when he first saw them, but is a little vague about the year.) This attracted the birds in growing numbers, and the locals responded with enthusiasm. Now several thousand birds can be seen feeding here in season. We came on them in the mid-morning, and saw a flock of several hundred picking at the seeds put out by the villagers.

Looking at a large mass of birds can be a treat. When many species are declining, it is nice to come across as species which is actually increasing in numbers. The Demoiselle has accomplished this by adjusting to a life on farmlands instead of the ever-declining grasslands habitat. Of course, this brings it into conflict with humans. After a while I began to pick out groups of birds which seemed to move together or cluster near each other. This was not an illusion. The large migratory flocks of the Grus virgo are made of smaller social groups. Apparently they live in smaller flocks during the breeding season, gathering together only for the migration and wintering. 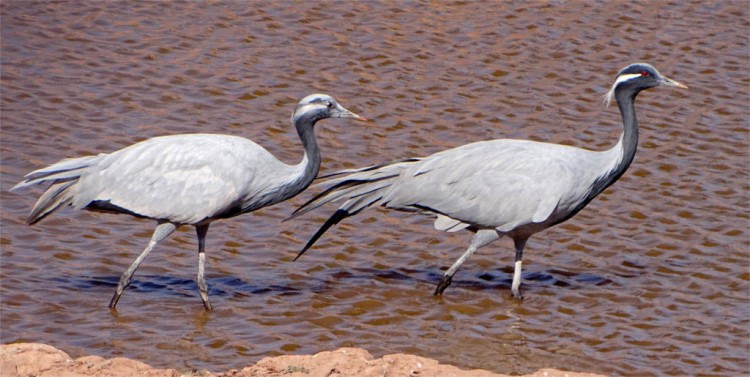 The birds are monogamous, a breeding pair stays together. One of the things that we were unable to see is the spectacular courtship dance. The cranes of Khichan would have finished their dances and courtship calls in the grasslands of Mongolia, and raised their young during the long summer. We could still see the differences in plumage between the adults and immature birds. As you can see in the photos above, adults of both sexes are blue-grey in colour, the head is lighter gray, the neck black, there is a long white plume from its eyes hanging down to the back, and their eyes are red. The immature are duller in colour, and the plume may be less well-developed. The legs and feet are black, and the bills are light yellow turning to a pink or orange at the tip. I found the multiple levels of social organization amazing: small flocks of breeding pairs coming together into a large migration. 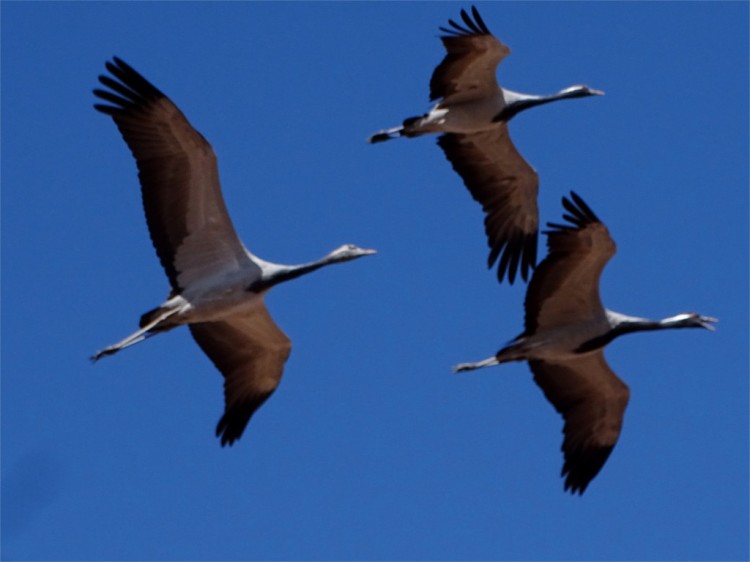 We watched the Demoiselles until they took flight. All cranes have similar postures in flight: neck and bill held out in a line, the body straight, and the legs lifted into a straight line perfectly aligned with the bill. There are scattered references to an unpublished satellite tracking study of the migration of Demoiselle cranes from Mongolia to India. Apparently it was found that flocks which winter in India travel over the Himalayas with extremely few rest stops. The path over the Annapurna range is supposed to be the most difficult high altitude migration route taken by any species of cranes. It seems that the Kali Gandaki river valley provides an access path through this high range; in 1979 more than 61,000 A. virgo were counted passing through a point in this river valley in twelve days. Demoiselle cranes were observed to fly at heights of between 5 and 8 Kms above sea level, and descended to lower altitudes over the valley only in bad weather.

It seems that all cranes are able to store fat in their bodies so that they can make longer flights without stopping. Interestingly, it seems that this does not elevate blood cholesterol and triglyceride levels in these birds. If only this were also true of humans!

It is now officially winter in Germany. The clock has been set back to the astronomically correct time. People have broken out their winter jackets. Just a couple of days ago, while walking to work I heard much bickering and honking. First I thought it was coming from the woods next to the road. But then I looked up, and was treated to the glorious sight of wave after wave of migrating geese. The photo above shows one such wave. Intermittently, through the day I kept hearing the geese as they moved to better feeding grounds.