Laying a mosaic is not cheap. If you wanted a mosaic made today then you would have to pay enormously for the time that it takes skilled artists to create one. The labour-intensive art of mosaics would have taken the work of many slaves in Roman times. So it is a bit of a shock to find a long stretch of sidewalk on the street of Curetes in Ephesus which is covered in mosaics. 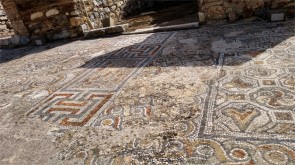 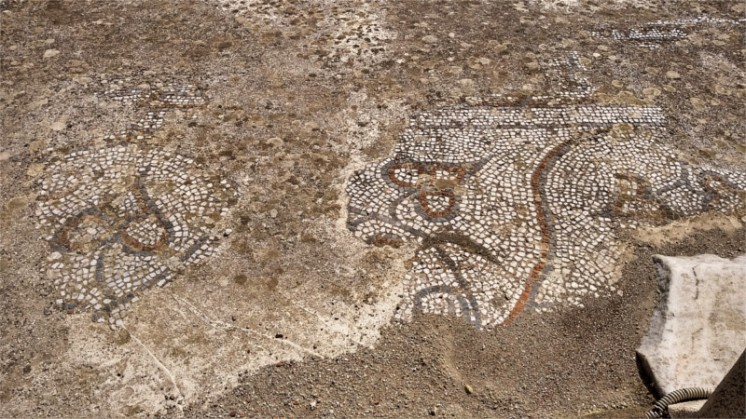 The road was open to chariots until the 4th century CE. So, if this is indeed a sidewalk, then the mosaics date from before that. They are not as elaborate as ones found in patrician houses. There are simple repeating motifs of flowers and leaves with scroll work around it. The sheer size of it is stunning, and it does speak of great wealth in terms of skilled man-hours. Even without the evidence of the buildings in this area, the sidewalk is a good reason to believe that this part of the city was where rich families lived. Was this the work of one public spirited family, or commissioned by the Boule, the governing council? I couldn’t find an answer.

The Family suggested that we should go for a walk along Ku’damm. It was past time for a coffee and cake, but maybe the right time for an aperitif. So we took the U-bahn. When you get out on the road the first thing that you notice is the bombed out remains of the old Kaiser Wilhelm Memorial church, next to the glowing blue box of the new church (photo below). We decided to walk in there.

It was time for a service in the new church, so we went into the memorial to the war. The church was built in 1895 by the Kaiser Wilhelm II in honour of his grandfather, Wilhelm I. It was bombed in 1943, and further damaged by occupation forces after the war. It has been restored since I saw it at the end of the last century, in the year 2000. I learnt that Charles Gray, a pilot in the bombing raid which destroyed the church, was one of the first contributors to a call for funds to repair the crumbling ruin, while retaining it bombed out shape as a reminder of the war.

I had a very clear memory of Plexiglas and metal housing around the church, made to preserve its damaged shape. This seems to have disappeared. I didn’t remember the mosaics inside. It is possible that when I came here earlier they were covered up. But, as you can see from the photos here, they are well worth a visit. Large portions of the mosaics have been restored.

We admired the mosaics, and then walked around one end of the nave which contained a little exhibit about the history of the church, the war, and the restoration. You can see many such stories throughout Germany, and they serve as appropriate reminders against wars. Anti-war sentiments run very deep in Germany, as a result.

The large mosaic of St. George on the floor was hard to photograph because of the number of visitors. I waited patiently until there was a moment when all feet had left the space, and I could take a photo. You can see the blue light of the new church reflecting off the floor. It is a small space, but we were happy with our visit as we walked off into the night to look for a place where one could have a quiet drink before dinner.

Breaking up ceramic tiles into pieces and using them in a mosaic is called trencadis. You can see this in many parts of Barcelona, but my favourite collection of trencadis is Gaudi’s work inside the Park Guell. All the photos here come from this place. Gaudi assembled the pieces from discarded tiles and broken pottery. You can see that Gaudi’s style of architecture with its dearth of straight lines was unable to use the usual rectangular tiles, and so was forced in this interesting direction.

We’d reached Barcelona late in the morning, and decided to go off to Park Guell after lunch. Not a great decision on a burning hot day, since there is a bit of a climb from the nearest metro station. For the last four years one needs tickets to get into this municipal park! Unless you have thought ahead to buying them, you could be in for a surprise. On this hot afternoon tickets were sold out five hours in advance. The ticket allows you in to all the parts of the park which have Gaudi’s work, including his wonderful tiles.

Apart from the buildings at the entrance, and his famous lizard-dragon (vandalized in 2007 and restored quickly after), the main trencadis work is on the main terrace. You can see this in the photo above. One of the interesting things about this style is that the component tiles are used only as tesserae in a mosaic, and the original design on the tiles has nothing to do with the pattern that emerges. A closer look at the details (see photo alongside) will tell you how that happens. Work of this kind requires an artist. That’s one of the reasons that the modernist art movements of the early twentieth century never took over the world. The machines of the time could not build this. It also turned out that the buildings which Gaudi designed were not a big draw for the paying public: now you can see about three of them in Barcelona, and one was the house where he himself lived.