I had too little time in New York to listen to new music. I passed by the New York Public Library, but it may require prior arrangement to look at the papers of Charles Mingus which it holds. In any case, I did not think of it until I passed the stone lions guarding, among other things, the life’s work of a musical genius (photo below). I do not really think of Mingus and his music in terms of geography, but if I had to, I would associate 42nd street with it. Sure enough, I met up with Charles and Sue Mingus outside the Oyster Bar in Grand Central Terminus (featured photo).

The low curved roof at this junction of passageways is held up by four pillars, some of which you can see here. They form a whispering gallery. I found travellers pausing to try this out: one of a couple would stand at one of the pillars, and the other would go to another and whisper something. It works, because they would then go off laughing together.

It is said that Charles Mingus proposed to Sue through this elaborate long-distance method. I haven’t found this story in Beneath the Underdog his rambling book which we have to count as his autobiography. Perhaps it is there in Sue Mingus’ memoirs, called Tonight at Noon. I should read it.

Just for that I walked up to 10th Avenue on 42nd Street. Another block north, and I could have gone to stand at the address where Charles Mingus last lived. I did not have the heart to do that.

Squirrels shut down NASDAQ in 1987 and 1994. One of them became a squatter in Bloomberg Tower even before it was completed. Even the occupation in Zuccotti Park seems to have been directed by one. You would think that New York City would have a secret squad assigned to track and detain squirrels who could pose a danger to the city again. This seemed to be sadly lacking.

In order to flush these terrors from their hiding, I stalked through Battery Park, camera in hand, and found a chestnut coated one hanging on to a tree. It was bold, and held its place even as I extended a lens at it. There was little I could do except record it and report it to the public at large. That’s the pesky creature in the featured photo. 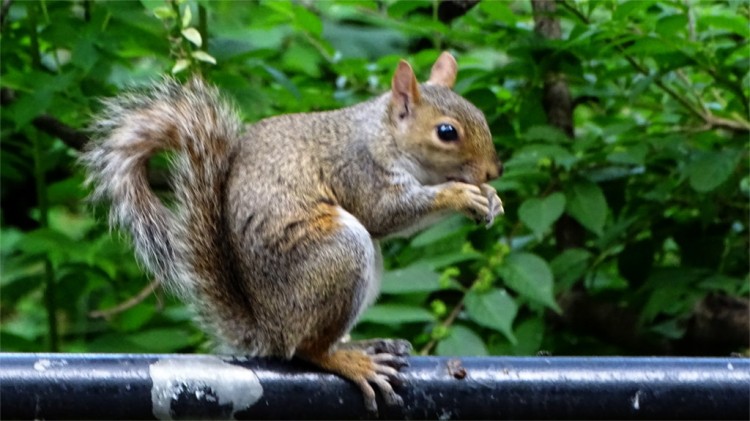 The Sciuridae family have their network. As I roamed City Hall Park later in the day, looking for the black squirrels which are supposed to have taken over the park, I saw the one (the photo above). It sat there bold as brass as I took photos. I noticed that there was a little chestnut colouring on its largely grey coat? Was this a chestnut, or a black? It was a master of disguise. I couldn’t decide one way or another. It had chosen its colour to cause maximum disruption. But I still had my camera, so that I could warn the public. Watch out for the one in the photo above.

The City’s department of Parks and Recreation (notice that: PR!) is clever enough not to fall for the artifice of these masters of disguise. They note blandly that all squirrels of New York are Eastern Grey Squirrels, also known as Sciurus carolinensis. Maybe these guys are good, maybe they manage to track the menaces, and I just did not see them doing their job in secret.

Never Google "quintessential New York", because you’ll be immediately sent to Forbes, or Conde Nast. If you are to believe Forbes, then the iconic New York snack is delicate sandwiches in the Star Lounge at the Ritz-Carlton. For the one-percent, maybe. But as my friend Mike would say, "Get outta here!" And if I wanted to get something back for The Family, I would not take the advice of Conde Nast and go shopping at A Détacher on Mulberry Street either. Mark Twain may as well have said quintessential is nothing but essential with a college education. Googling "essential New York" does not do much better.

I turned to my favourite oracle: the wisdom of the crowd, and messaged all my nieces. The clear winners were an I-love-NY t-shirt (the kind which you can also buy on the streets of Mumbai or Delhi) and a hot dog from a street stall. I’d run this question past Mike a few years ago, and he told me to go to a diner. Other favourites included lox, bagels, pizza, doughnuts, pastrami, and cheesecake. There’s just so many calories you can take in a day. So I stuck to the phone-a-friend suggestions, hot dog on the street (featured photo, outside the Grand Central Terminus) and a diner for breakfast (photo above, on the East 60th Street). These were wonderful things to do.

It has clearly been a very long time since I was in New York City. One lovely new thing that has happened is that there is more art in the subway. The example you see in the featured photo is from the Lexington Avenue and 59th Street station. Quite a stunner; it is called Blooming, and the artist is Elizabeth Murray. 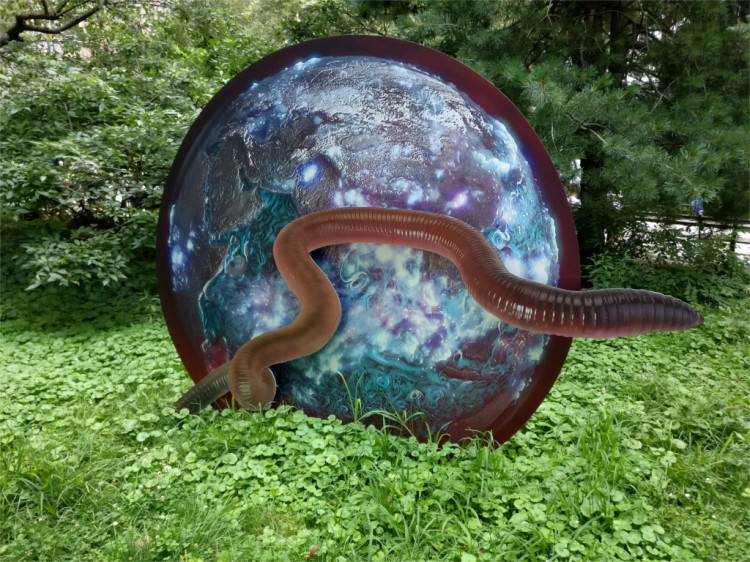 A beautifully quirky set includes the example above. The whole set together is called Earth Potential. The temporary installation in the city hall park is by Katja Noviskova. It blends beautifully with the surroundings, as you can see. As one walks around Manhattan now one sees a lot of interesting outdoor art.