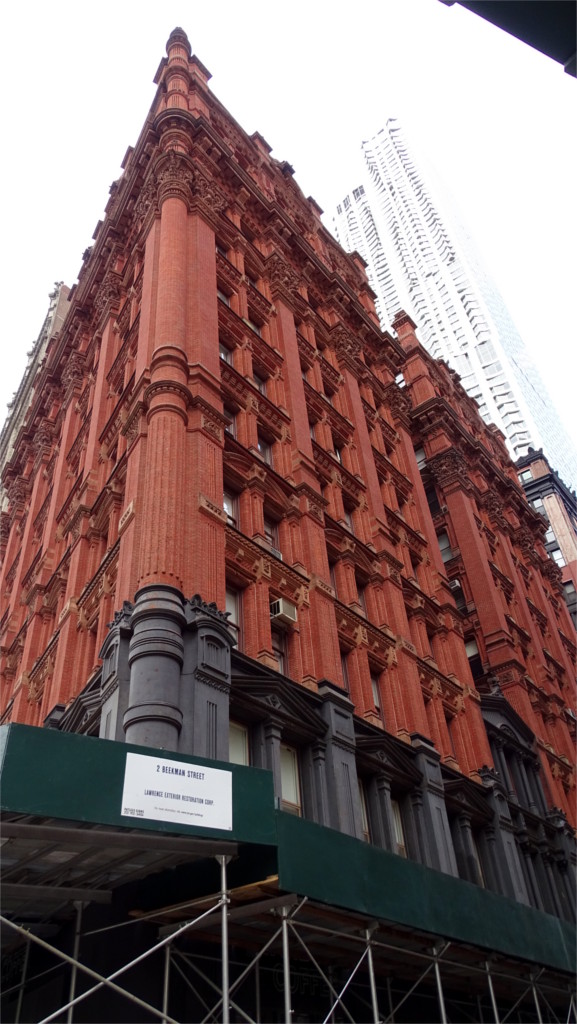 Contemporary opinion on the Potter Building, completed in 1886, is very mixed. One critic called it “coarse, pretentious, overloaded and intensely vulgar”. Another thought it was a “great and illustrious monument”. I was quite impressed by the sheer size of this building from more than a hundred and thirty years ago. It takes up a block, and rises to 11 storeys. Park Row and Beekman Street make an acute angle, and from this rises the tall column in the centre of the featured photo, topped off by a pinnacle.

The lot was owned by Orlando Potter, a very successful businessman and a prominent figure in local politics. When the previous building burnt down, he commissioned a new building in the same spot by architect Norris Starkweather. The building was to have every possible fire safety feature then known. At that time this meant that the construction would use iron and terra cotta. The iron framework, called a cage, supported the floors. The exterior walls were of fire-resistant brick, twice as thick at the bottom as the twenty inches on top. The base is clad in cast iron. Terra cotta had come into use after the Chicago fire of the previous decade, and this building used it extensively.

You can see some of the details of the terra cotta work in the photo above. A contemporary account noted that terra cotta used as a structural element was half as heavy as stone, while being equally fire proof. The deep sculpting of the terra cotta exterior in this building contrasts with those in the two neighbouring ones, for example, the Morse building behind it on Beekman Street.

I’d wanted to take a good look at the external light court on Beekman Street, but the ongoing external work meant that I could not. The building was originally office space, but has now become cooperative housing. It looked like a nice place to stay. Just out of curiosity I looked at the building listing, and found that nothing is available for rent or ownership currently.

I walked around it and found that the white tower behind it is another notable. It is one of the tallest residential buildings in the world. Frank Gehry was the architect and it was completed in 2011.