When a pair of painted spurfowl (Galloperdix lunulata) emerged warily at the edge of the clearing in front of my hide, it was a lifer. I’d never seen these gamebirds before. The brightly coloured male with its spotted plumage, and the somewhat muted colours of the female were completely new to me. I noticed the wicked spurs on the legs. What are they used for? To battle other males for territory and breeding rights? Typically species with sexual dimorphism of this kind are not monogamous, although an authoritative book from 1928 is often quoted in evidence of monogamy. The pair advanced to the middle of the open area in front of my hide, pecking constantly at the ground. They eat seeds, grains, berries, tubers, and insects. 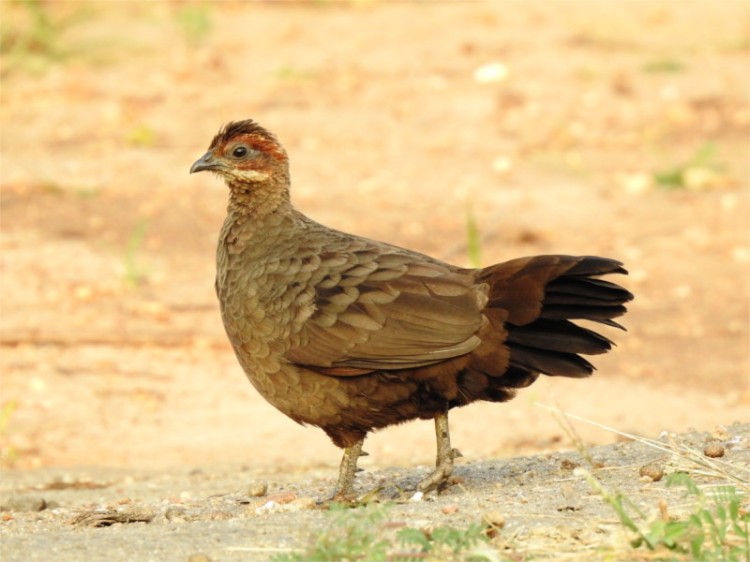 Another pair slunk through the grass and bushes behind, and the male jumped on to a big rock, (featured photo) leaving the female behind. That was a remarkable leap, and I wondered why it didn’t flap its wings at all to get some lift. Other jungle fowls do an ungainly flutter now and then, but apparently not the painted spurfowl. It would rather run fast than fly. A lone female ran about in the dust ahead of me, stopping to peck every now and then.

The painted spurfowl is found everywhere on the plains of India, and breeds from late winter to the beginning of the monsoon. The male shares in the rearing of the chicks, again unusual given the flamboyant colouring of the male. Given that it’s so widespread, I wonder why I haven’t seen it before. I asked The Family, and it turned out that she has seen it before, on a trip on which I didn’t go. So have I seen it earlier, or not?