When I saw this framed print in Kolkata my first thought was that it must be a copy of a Kalighat style painting. My second guess was that it was a copy of a Jamini Roy. It is neither, but it follows a tradition that both used: Durga (in the aspect of Parvati) cradles her eldest son, Ganesha, in her lap. The tradition of Ganesha as the son of Parvati is at least two millennia old, so there must have been other traditions of painting the two in a similar style. It should be interesting to dig into whatever is left of these paintings.

On every trip that I make there are things really worth seeing that I miss. But perhaps nothing could be as bad as walking past the oldest temple in Odisha, noticing that it is different from the rest and beautiful, and not stopping for a close look. This was the Parasurameshwara temple. There seems to be a consensus that it was built in the late 7th century CE, although variant opinions place it as early as the early 6th century or the middle of the 8th century.

I walked past this temple to take photos of the Mukteshwara temple in the last golden light of the day. I saw that the temple had the two parts of most Odisha temples: the outer room for people to gather in, called the jagamohan, and the spire of the main temple, called the deul. The jagamohan was low, and seemed flat-topped to my quick glance, without the usual pyramidal roof. The latticed window caught my eye first. The carvings that I saw on the southern outer wall of the jagamohan (see the featured photo) were beautiful and different. Later, I realized that the sculptures of figures seated in meditation were of an aspect of Shiva, but modelled after the iconography of the Buddha. If I’d paused to think, this would have told me that the temple must be ancient. The wall also had representations of what seemed to be Shakti, the goddess of power.

The colour was fading from the sky, and the golden light was beginning to bleach out of the air. East-facing walls were already looking grey. 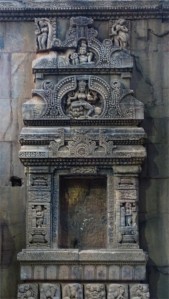 I took a record shot of an empty niche (photo here) and hurried on without examining the sculptures in detail. Now, looking at the form just above the niche I realize that it shows Shakti in one of her aspects. She is two-armed, and rides a fierce tiger. Could it be an early representation of Parvati? Probably, since the figure just above seems to be of her consort, Shiva. The temple is eclectic: named after an aspect of Vishnu, with sculptures depicting aspects of Shiva and the Shaktis in the exterior. I made a mental note to come back, and I did. But then it was quite dark, and I did not walk around the 1400 years old temple. I will just have to leave this for another trip.