Harsh cries ring through the jungles of central India in summer: the call of the peacock. I normally ignore the Indian peafowl (Pavo cristatus). They are commoner than crows and pigeons when you enter the open jungles of this region. But as the monsoon’s breeding season approaches I keep a watch for the mating display of the male. If you are lucky enough, you can get a photo that is worth the halt. Sometimes you see a lek: a group of males all displaying together, for the benefit of a seemingly uninterested female. This is perhaps its core behaviour. The female selects a mate based on the size and colour of the train. Growing a large train takes energy, in terms of health and food, and the ability to escape predators. There’s no faking it. At the same time, the female’s preferences selects the biggest trains, and therefore the offspring are likelier to have big trains. Repeated for generations this pushes the species into the direction of males with more spectacular trains. Since the genus could be recognized in 18 or 19 million years old fossils, most species in the genus have evolved towards bigger trains.

Unfortunately the only peacock I’ve seen is Pavo cristatus, the Indian peafowl. Native to Bangladesh, India, Nepal, Pakistan, and Sri Lanka, breeding populations have been introduced in Singapore, Taipei, the UK, and the USA, largely in Florida. I’ve yet to see its larger cousin, the Green peafowl (Pavo muticus). It is disappearing fast in Myanmar, but I suppose on a trip to Thailand, Vietnam, or Cambodia, or even in the extreme east of India, I could plan to visit its habitats. It is a little astounding that viable hybridization between P. cristatus and P. muticus can be established. It seems that the reason is that in birds cellular evolution is slow, and two species like this, which have separated only three million years ago have not changed sufficiently for their crosses to be unviable. I wonder whether anyone has tried crossing the Congo peafowl (Afropavo congensis) with either of the Pavo.

An interesting thing about the feathers is that they never fade. That is a clue that the colours are not due to pigments; pigments would oxidize over the years and change. The iridescent colours are due to, well, iridescent diffraction of light. Microstructures in the feathers produce the specific wavelengths that are seen, and a little change in the shape and size is enough to change colour. I’m surprised that a comparative study of the feathers of the peafowls has not been done. It seems that feathers don’t fossilize well, otherwise it would have been possible to examine the feathers of the extinct European peafowl (Pavo bravardi in the south and Pavo aesculapi in the north) and tell their colours. It is strsnge that so little is known about birds as spectacular as these.

It is time to say this. The epidemic and the enforced lockdown continues to show what a strange universe we had locked ourselves into. The walls we had built around our complicated social and economic world have collapsed and through these gaps we can see new possibilities. When we build up again, there will be a push to instantly return to what we had earlier, but it will be good for us to see how flimsy the supporting arguments were.

The air is so clear ten days after the beginning of the lockdown that from the rooftops of Jalandhar one can see the high Himalayas. We’d driven through this city almost two years ago, when we spent a week in the lower Himalayas. Passing through the traffic snarled up in the city I never realized that we were only 450 Km from Srinagar in Kashmir. This air can be kept clear. Change from oil to electric. Electric scooter technology is cheap and widely available. Just the will to change the tax structure to favour a new industry is lacking. Autos on the road are another major polluter, but changing their two-stroke engines to battery would be another step towards clean air. It can be done at a cost much smaller than the lockdown.

Dolphins on Marine Drive in Mumbai! Whales visiting the oil rig at Bombay High! These are not fake videos. We saw different dolphin videos taken by a lot of people, from a lot of different angles. So this we can be take as verified. Just one day of reduced noise pollution in the sea brought dolphins into Backbay. That’s not something I’ve seen written about even in the literature from a century ago. The incidental conversation in the whale video indicates that this is probably not fake. We will not be able to recover this perhaps, because the world’s supply chain moves through the seas. On the other hand, I know some extremely good engineers, and they should be able to put their minds to lowering the noise made by ships, if they can make a living doing it. After all, energy lost to noise is produced by burning fuel, so less noise is an incremental increase in efficiency. In any case, it is good to see how quickly nature can begin to reclaim the earth.

Peacocks dancing through the streets of Mumbai! Who would have thought! I didn’t even know there were peacocks left withing the city. That’s hope for the future. We do have small green lungs in the city. I hope videos such as this give people a reason to hope that planning for more patches of greenery will help preserve these wonders right here, next to our homes. I think a lot of small patches with trees will help.

Away from the big bad city, one has seen videos of elephants roaming through the streets of small towns. That may not be to everyone’s liking. There is a growing body of scientific thought that says that the increasing instances of new diseases, SARS, MERS, Zika, Ebola, and COVID-19, is due to human activity encroaching on parts of the world which were the natural range of other species. It sounds reasonable, because the new diseases are not coming from the already-dead lands of Europe and the US. They are arising in parts of the world where there are ancient ecosystems newly destroyed. We have known for years that human-elephant conflict is due to us taking over their land. Now perhaps we are facing bigger threats as we take over new ecologies.

Enough of a Sunday sermon. Let me end with this wonderful video of a fawn of the spotted deer, Cheetal, galloping in the waves of the Bay of Bengal. The video is verified to come from Puri, that famous temple town and beach resort. What a wonderful sight! I cannot go out to see wildlife right now, but it is coming in to see us today.

Walking about Ujjain’s Jantar Mantar I was expounding boring theories about the resurgence of medieval astronomy in early modern India when I heard the harsh call of a peacock. The Family clearly found this call electrifying. She broke off towards the tree where the call was coming from. The bird wasn’t hard to spot. It was sitting right there in the shadow below the canopy and calling loudly. It looked down its beak at us for a while, like the villainous Shen from one of the Kung Fu Panda movies.

Peacocks must be terribly common in Malwa. Just the day before, I’d seen one perched on top of a dead tree next to the highway, doing nothing except looking faintly ridiculous. I find them fascinating when they walk about on the ground. When one is up on a tree its exaggerated train looks exactly like out-of-control clothes on a dandy. When all other pheasants I know of are shy creatures, who run away at the sight of humans, I wonder why the peafowl is so indifferent to us. 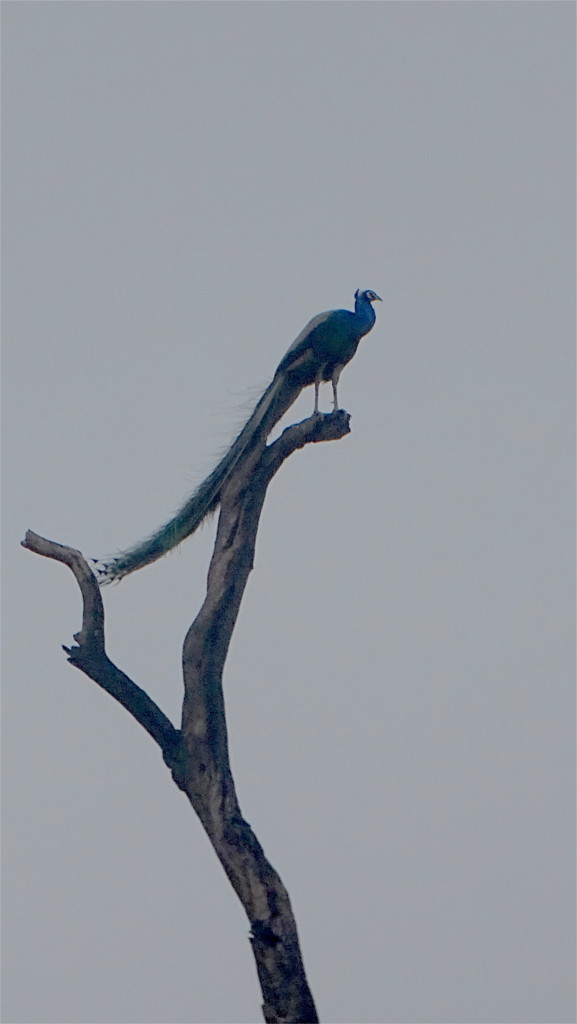 In fact, when you browse the IUCN Red List you find that most pheasants are endangered due to loss of habitat, but not the peafowl. It has adapted to humans. It cannot be an accident that the peafowl is most closely related to turkeys, another species which has adapted to humans. I haven’t found detailed studies of this adaptation, but one of the most important reasons must be that they do not eat crops, and therefore are not considered to be pests. Are they also able to use the disturbed landscape efficiently to forage in? I’ve seen them in gardens and forests. Are they generalists in terms of utilizing landscape for breeding? I haven’t come across answers to questions like this. Perhaps there are studies but they are hard to find.

I was right at the back of a large open top vehicle called a cantor (I have no idea why a large jeep is named after a singer). When we came to a halt I was one of the last people to figure out that there was a large number of peafowl on the road. It had rained overnight, and there were several pools of water in the road. The bunch of birds must have tired of the worms and grass seeds it had been foraging on, and come to drink the water.

Although peafowl are widespread, I’ve never seen people walk past them without stopping. All twenty of us in the cantor were happy watching these pheasants walking around, drinking water, and generally having a relaxed time. This was not the mating season, so there were none of the fabulous displays that one sees from the male when its trying to attract a female. 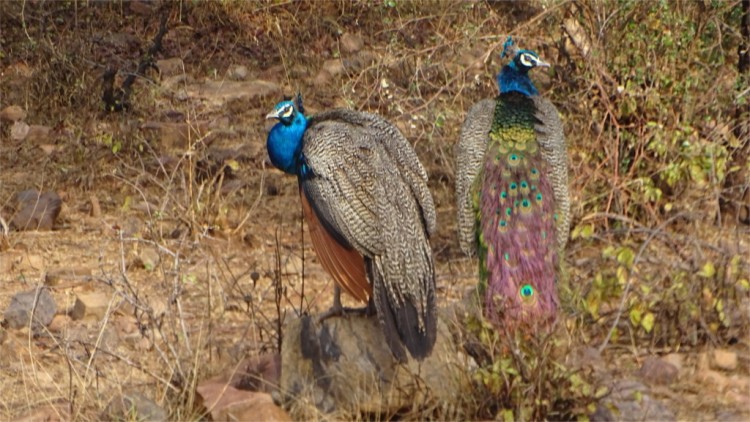 Off to one side of the road a couple of these dandies were displaying an aloofness that completely disappears in the mating season. I haven’t seen the red in the plumage before. Since the spectacular blue on the neck, and greens and golds on the tail feathers are all tricks of light (being due to diffraction from the microstructure of the feathers) this colour could be just due to the special angle I happened to see it from.

There doesn’t seem to be anything particularly distinctive about peafowl apart from the colours of the male. So why was it chosen to be the national bird of India? Quora has an interesting discussion on this, One day I must read the record of the deliberations of the committee that made this choice.