Some years ago, The Family and I went for a very short holiday to Mandu. The way lies through Indore. We spent only a couple of hours in the town on the way back. I remember seeing some cenotaphs (chhatris) of the 19th century Holkar rulers (photo below). We walked through a place called the Sarafa Bazar and found it interesting but less than spotlessly clean. Today Indore is ranked the cleanest city in India. There’s an interesting story behind this transformation. It is also something that made us think of going back to see the city.

Perhaps as a result of this clean up, the street food scene in Indore is something that gets lots of attention on blogs. I saw blogs by Selcouth Explorer, the former Dilliwali Taste Memory, the local expert Megha and the wonderfully named Follow the Eaten Path rave about street food, but naming very different things to eat. There is clearly a lot of variety when it comes to street food of Indore. Two places which crop up over and over again in stories about food in Indore are Sarafa bazar, which is apparently open till two in the morning, and Chhappan dukan in New Palasia, which has 56 different food stalls. I guess the question of where to eat will become an issue in Indore.

Historically, Indore rose with the Maratha empire. In the first third of the 18th century the Nizam granted rights to the Malwa kindom over to the Peshwa, who then handed the town of Indore and the district of Malwa to the Holkar chieftains. Indore remained the main garrison town although Ahilyabai moved the capital to nearby Maheshwar thirty years later. The palace complex of Rajwada was built in 1866, after this move. I discovered some photos from our visit (the door above, and the featured photo) which turn out to be of Rajwada. The Family and I have no independent memory of having been here: so I guess we will go back to see it. The Lalbagh Palace, which also seems to be one of the major sights, was built by a Holkar well after the final defeat of the Marathas in 1818. We have certainly not seen this. Nor have we seen the Jain temple made of glass, the nearby Jama Masjid, the three century old Khajrana temple, or the less well-known British era red and white churches.

Indore is the gateway to several interesting places nearby. The Family and I have already been to Mandu and Maheshwar. I visited Omkareshwar a while back. So there are few other places to see nearby. Is Dhar interesting enough to make a one and a half hour drive? If we have to take one trip out of Indore, would we rather go to Ujjain, which has been continuously inhabited since 700 BCE? This means that I have to read a lot more.

Shaniwar Wada in Pune was the seat of the Peshwas in the declining years of the Maratha empire. The palace complex was built in the first third of the 18th century CE, and burnt down in 1828. A Peshwa was originally the prime minister of the Maratha king, but during these years became effectively the head of the empire, and the position became hereditary. Although the empire was not as strong as it was in the beginning of the 18th century, a large part of India’s politics was transacted in this complex. This former place of power is now effectively a walled garden for Puneris.

As we entered the main gate of the palace, I saw this middle aged man relaxing near the entrance. I wondered whether he was retired and found this a good place to get away from home and do some people watching, or whether he’d had a tiring day at work, and was just sitting here for a while before making his way home. It didn’t look like he was planning to stay here long.

From the ramparts I looked down at the front apron. Families were milling about, each trying to take a photo against the walls of the palace. As I watched, this girl positioned her family behind her and took a selfie. It took a couple of tries, but the one she’s examining in the photo above seemed to satisfy them all. 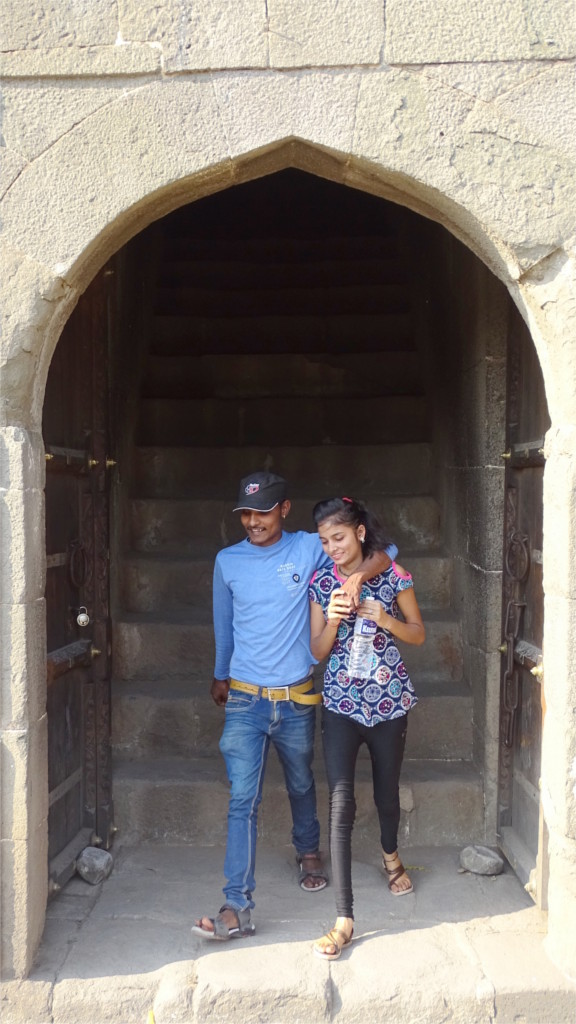 I positioned myself in front of this arch because the doorway and the stairs behind it made a nice picture. The photo would come to life when someone came down the stairs. I was lucky, the first people to descend were this young couple. I saw many couples like them in the complex. The seat of the Peshwas has now become a garden for couples to spend time in. 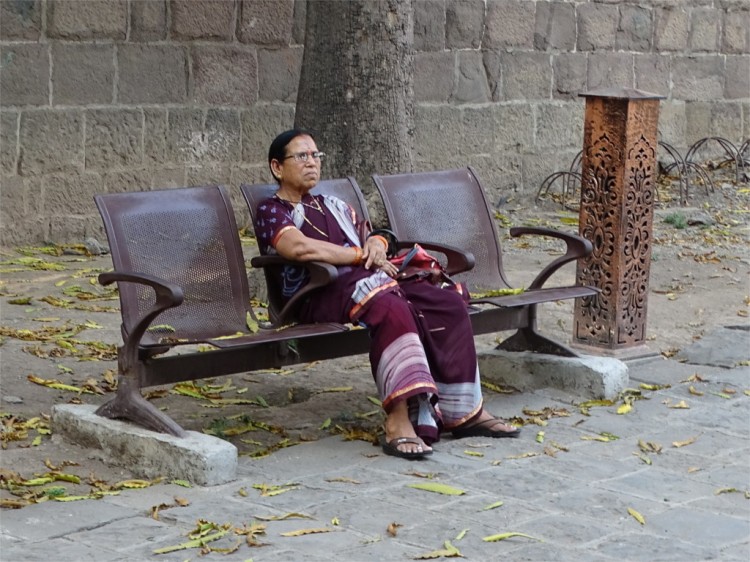 This lady was clearly determined to have a little time by herself. She was in a rather nice sari, sitting alone on the bench (it was very pleasant in the shade). She was quite relaxed while watching people around her. But she noticed me taking her photo and stiffened.

In 1818 the Maratha empire lost their final battle against the British forces in Khadki and Koregaon, not far from this palace. Just a short hundred years later, three or four generations, almost in living memory, the court of the Peshwas has become the playing ground of commoners. What could happen in another hundred?