Bhimtal during the day did not look nearly as romantic as it did during the sunset. We left it behind and took the road to Bhowali, where we wanted to join up with the main Nainital-Ranikhet road. Not having researched Bhowali, we did not know that it has a “beautiful fruit market which offers to the tourists [a] rich variety of fruits” as a tourism website puts it.

We stopped just before the crowded junction of the Bhimtal-Bhowali and Nainital-Ranikhet roads, just out of the zone where traffic policemen were enforcing a no-parking rule. On one side of the road was a little stream which had become a sewer, but the other side was lined with shops selling a staggering variety of fruits and nuts. We stocked up on many things which we recognized, and one (see the photo above) which we did not. It was mildly astringent, and could have been unripe. Can anyone help with this? What is it called? 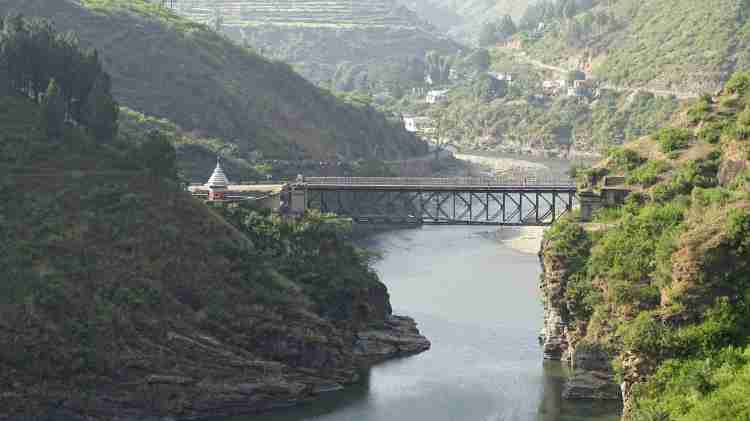 A couple of hours on we found that one side of the road dropped away into a reasonably broad river valley. The river itself was running pretty dry in October, when we visited, and the banks were full of tumbled rocks. The hillsides had mixed forests. So this was bound to have great diversity of birds. Unfortunately there was no way down to the river. We stopped for lunch after crossing a high bridge and passing the confluence of two rivers (see the photo above). Lunch was delicious and fresh: rotis hot from the oven served with pungent onions, a simple but delicious moong dal with lots of local greens thrown into it, and a chutney which incorporated some other local herbs. Of the four or so tables in the tiny dhaba two had tourists carrying long lenses, and the others seemed to be full of Kumaonis.

There was no network, so we could not figure out which river we stood by. Later we found that the river was not even marked in Google Maps, although switching to a satellite view does show the river bed. We figured from the infrequent signage that this was either the Kosi river (and clearly not the flood-prone Kosi which runs through Bihar) or a tributary. Interestingly, this Kosi does not figure in Wikipedia either.

After lunch we loitered for a while trying to spot birds. This is the kind of landscape where we would expect to see the brilliant blue-green plumage of Verditer Flycatchers. We scanned the trees and rocks. No sign of flycatchers, nor of redstarts. By now we had left the mixed forests behind and were inside pine forests, and I suspected that this was the reason we found no birds.

The chir pines are local, but were first systematically cultivated across the region by the British. Even now economics continues to dictate the spread of pine forests in Kumaon. One problem with this is that pine forests reduce the diversity of species growing within them. As an example, there are very few pests of pines, which is good for those who cultivate it, but which also means that there is little for birds to feed on. As a result, birders and butterfly or moth enthusiasts would do well to avoid these. Some villages have begun to make efforts to repair this destruction of habitats by replacing pine forests with more productive forests anchored by the local varieties of oak.

We drove for a large part of the afternoon and reached Almora in good daylight. We did not need to go into the town, but we did. After taking a long drive through Almora we came back to the Almora-Binsar road and continued on to our hotel. We completed our check-in as the sunlight turned to liquid gold. Our rooms faced Nanda Devi, but there was too much haze to see the peak clearly. What we saw was a Verditer Flycatcher! There was also a Great Barbet sitting in a tree near the balcony. Our tea arrived as we soaked in the atmosphere.

The sun set as we finished our tea. Before the light faded from the sky we decided to take a little walk in the woods around the hotel. During this walk we spotted an uncharacteristically quiet Himalayan whistling thrush, and a chattering Himalayan bulbul. A grey-backed shrike posed for us on a little post next to the road. Then, just as the light was about to fade completely, a fluttering in the bushes caught my attention. There was a jewel, a day-flying burnet moth, the Campolytes histrionicus. The bad light forced me to use an image enhancement setting on my camera which blurs the photo a bit. But it was a good end to the day.