Himachal Pradesh rises from the plains into the high Himalayas. On this trip the highest point we reached was Jalori pass, which is a little over 3.1 Kilometers above sea level. At this height I expected to see the butterfly called the Painted Lady (Vanessa cardui). This is the commonest of temperate butterflies, apparently found on all continents where flowers grow. We could have seen it, but I have no record of it. I keep confusing it with the other tortoiseshell butterflies. They are slippery chaps, seldom settling down long enough in one place for one to take a photo. The mountain tortoiseshell (Aglais urticae, in the featured photo) eventually settled on a flower by the path to Serolsar lake. The Young Niece was pretty excited by the sight of this plant with a butterfly “flower”. True to its descriptions, it flitted from flower to damp ground and back again. This was my first sighting of this species. 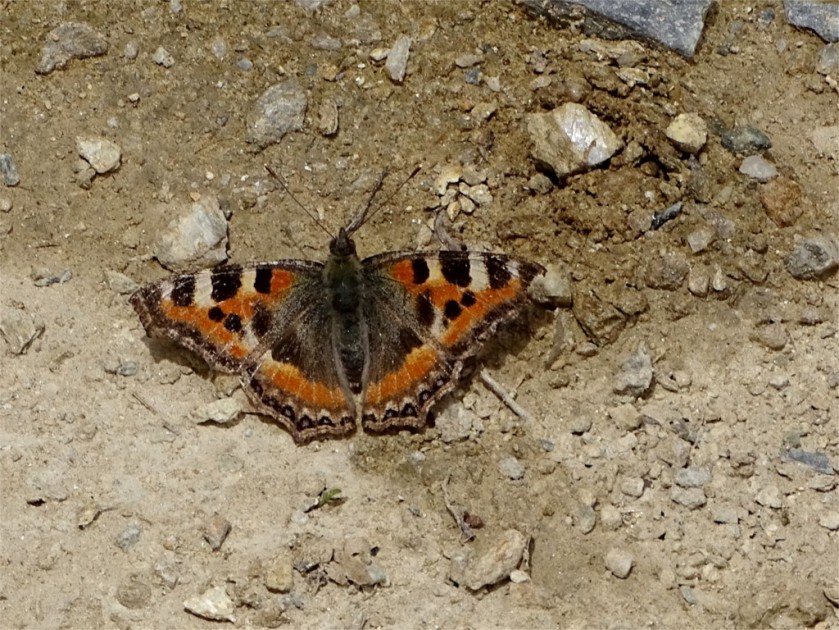 It is very slightly different from the Indian tortoiseshell (Aglais cashmiriensis, which you can see in the photo above), and in the field it is very hard to tell them apart. As you can see from the photos, the forewings are almost exactly the same, and only little details in the hindwings distinguish the two. In fact, the otherwise excellent booklet published by the Zoological survey of India on The Butterflies of Himachal Pradesh misses out on A. urticae.

By far the commonest butterfly on this walk was one I’d never seen before: the common satyr (Aulocera swaha). As we walked through the stony path to Serolsar lake, inside the forest of oaks, we saw these butterflies sitting on stones (photo above), or settling on dry leaves on the path. The Young Niece asked me what it was called, and I told her that I did not know, but would have to look it up later. I think these three are all that I noticed near the pass. 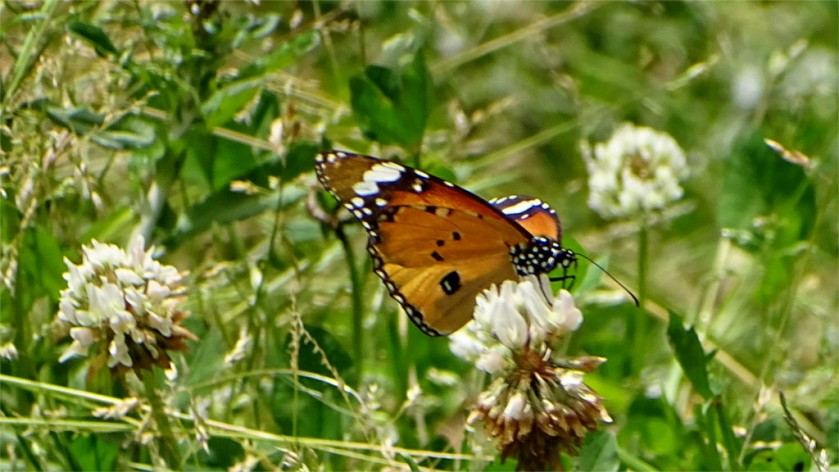 Most of our time was spent in the narrow grassy valley around the rocky course of the Falachan river at an altitude of about 2 Kilometers above sea level. This place was full of some of the common butterflies which you also see in the plains. The Indian cabbage white, various grass yellows, and, possibly, some pioneers were common. I must have missed an enormous variety of butterflies here. One I did manage to take a photo of was the plain tiger (Danaus chrysippus, photo above).

The rocky edges of the Falachan river was also good terrain for spotting butterflies. I don’t think I’d seen the common wall (Lasiommata schakra, photo above) ever before. They are found in a range between 1 and 3 Kilometers above sea level, and probably easy to photograph because they settle for longish periods in sunny spots. I think that white streak around the eye-spot in the forewing indicates that the individual in the photo is a female; the male lacks this feature.

The generally mottled brown and yellow-orange colour of this butterfly in flight first fooled me into thinking that it was a painted lady. But when it settled on a stone, and I took the photo which you see above, it became clear that it was not. It took me some time to figure out that this was the common Punch (Dodona durga). The ZSI pamphlet on the butterflies of Himachal Pradesh says that this has been reported in May from Chamba and Shimla districts, so I’m happy to put on record this sighting in Kullu district.

Lower down, at an altitude of about 1.6 Kilometers above sea level, we started a walk to the gates of the Great Himalayan National Park, near the village of Ropa. Near the beginning of the walk, we came across the flowering tree which you can see in the photo above. There was a cloud of butterflies around it. I mistook them first for the red Helen, which belongs to peninsular India. The correct identification for the butterfly you see in the photo above is the great windmill (Atrophaneura dasarada). Later we saw that they had been joined at this tree by a large number of orange tips.

We had raced through the lower slopes, with a single stop somewhere in the district of Solan where I immediately saw the butterfly whose photo you see above. This is the common Leopard (Phalanta phalantha). I’m sure if one spent even an hour at this lower elevation, below a kilometers, one would be able to spot an enormous variety of butterflies.

The genus of plants called Ceropegia are pollinated in a very strange way, The Family explained to me. After her first trip to Kaas plateau two years ago, she showed me photos of this strange flower and explained how they trap flies to pollinate themselves. The upright flower opens up and flies come in to look for nectar. As soon as they land, the petals close into the cage shape you see in the featured photo. The frantic fly buzzes about and pollinates the flower. After this the flower droops down and opens up to let the insect out. In the bunch of Ceropegia vincaefolia that you see in the featured photo, two of the flowers are ready, and the droopy one has been pollinated already. These tall bushes were fairly common around the Kaas lake. Apart from the mode of pollination, I found the green colour of the petals rather unusual.

But the most marvelous sight of the trip was this tiny plant on the plateau: Ceropegia jainii. I was lucky to be with two naturalists who knew roughly where to look. This species is a little rarer than tigers. In the photo you see the green egg-shaped base called the crown kettle, and the purple crown tube formed by the five petals. If you look closely, you will see the downward pointing hairs inside the tube which trap the fly. If this flower is similar to that of the C. vincaefolia, then at the narrow bottom of the crown kettle is the hard-to-reach corolla. I was not going to dissect such a rare flower to look inside it. The whole flower is a little less than two centimeters long. You can see that it grows on an unbranched stalk with thick leaves. In the photo above you can see other buds forming on the stalk.

I was so thrilled with the sight that I noticed the caterpillar only after looking at the photo. It will eventually grow into the spectacularly coloured butterfly called the plain tiger (Danaus chrysippus). I don’t know whether there is an association between this and C. jainii. Since host plants of the plain tiger include other known milkweeds (family Asclepiadoideae) it is not impossible. On the other hand, I did not see the typical circular holes that the caterpillar makes in the leaves of its host plant. In any case, this is something to watch for in future.