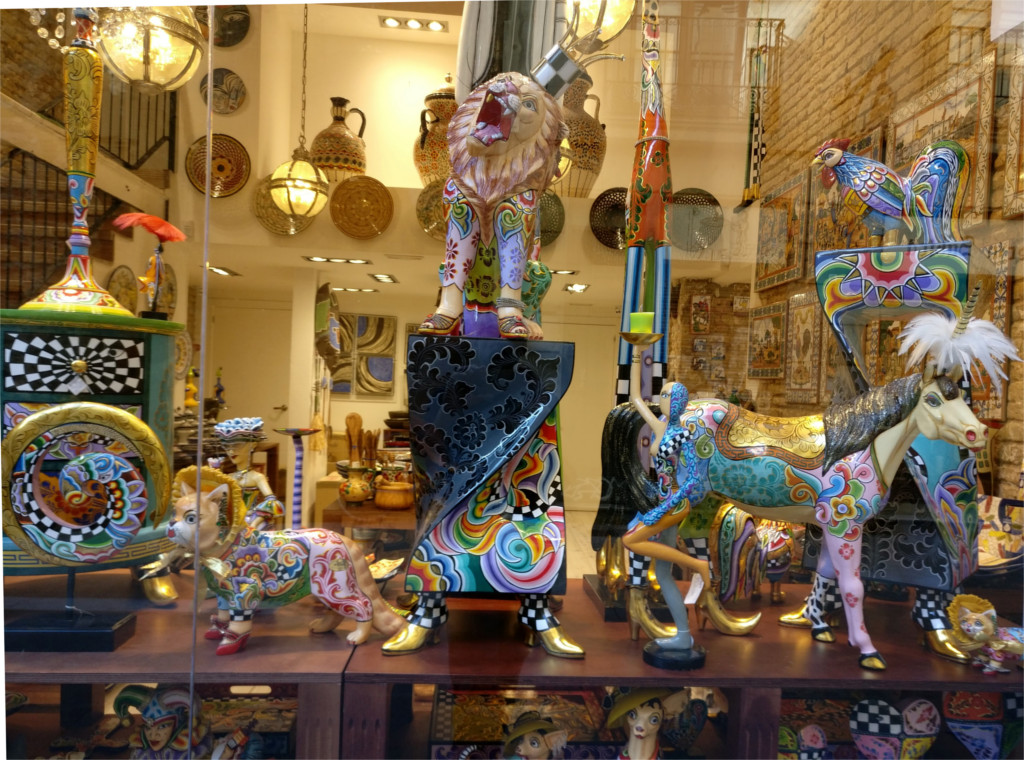 I haven’t written about shopping before. But when you see a shop window in the evening which looks like the featured photo, perhaps I could do it. We walked into the shop to look, and it was full of things which were as wacky as these. Apparently Art Escudellers of Barcelona supports contemporary sculpture and ceramics from across Spain. Apart from the figures which are meant to stand in your home and brighten it we also found things which are useful, beautiful, and equally costly.

We didn’t have time to go to the Museu de Ceramica, so it was pleasant to walk into a cool shop to spend a little time just looking at the samples of Catalan ceramics on display here. If we had to buy ceramics we would have spent some time researching the shops.

I saw everyday pottery from before the modern era in various parts of Spain. In a village museum in Andalucia I saw the plate shown in the featured photo. The decoration looked very modern. When I looked at the date, it turned out to be from the early 20th century. I liked the red colour of the fired clay, which you see in the rim. The thin white glaze and the faded green decoration looked very nice too.

In the same place, I saw the pieces which you see above in the photo on the left. These pieces are also Andalucian and come from the early 20th century. On the right, above, is a detail from a painting by Murillo. If it shows contemporary pottery, then it is Andalucian, and from the early 17th century. Three hundred years has changed this pottery a little. The shapes are very similar. The newer pottery has somewhat of a brighter glaze.

This could be because the firing kilns are hotter, and therefore allow different glazing.

Finally, I leave you with photos of pottery I saw in Toledo, said to be from El Greco’s time. If this is an example of mid-16th century Castillian pottery, then it is remarkably similar in colour and design to tiles from other parts of Spain and Portugal of that time. Interestingly, even now one finds in southern France, pottery with similar decoration.