Towards the end of our visit to Guangzhou, I was feeling under the weather and slept through our usual lunchtime. When The Family came back from exploring the neighbourhood and woke me up we decided to have a snack at one of the several restaurants in the neighbourhood which were famous for their Yum Cha. If Tao Tao Jiu was closed, then the next place on our list was Panxi restaurant. It was not where the map showed it to be. We hadn’t bothered to write down the characters for the name, so we spent an extra fifteen minutes feeling lost. Eventually, when we found the restaurant, it was so large that I would have found it hard to misplace.

The restaurant is historic. It was founded in 1947 in part of an old Han dynasty garden. The water and the bridge of the featured photo are inside the restaurant. There’s also a small waterfall, and turtles and carp in plenty. The reception and the layout look like it would have been a favourite restaurant for minor officials in the old days. We were very late for lunch, and much too early for dinner, so only one of the many rooms was open. We were shown into the overwhelmingly golden hall which you see in the photo above. Most of the people here were surprisingly young, unlike the mixture of ages we’d seen in Guangzhou restaurant and Lei Garden. 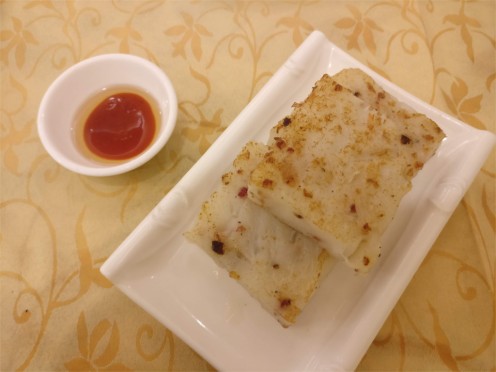 Later we found a mention of the place in the Michelin Guide. It notes briefly “fresh ingredients, capably prepared,” and recommends the stuffed dace as well as the Macao-style roast pork. We didn’t know about any of this, and we were not too hungry. After much effort we attracted the attention of a less-than-friendly waitress who offered a variety of pre-packed tea, already familiar to us from other places. We chose a Pu’er, and then looked despairingly at the order form in densely printed Chinese. You are supposed to tick the items which you want. A friendly young couple at a neighbouring table helped us to choose a few things. Several of them were specialties of Panxi: the rabbit shaped dumpling and the chestnut cakes were on their web site, when we checked later. Service was slow, but we were in no hurry. Although the food was not memorable, the surroundings were the most wonderful that we found in Guangzhou.