I thought this was a lifer, since I would have remembered seeing such a colourful bird before. But apparently it wasn’t. The name red avadavat (Amandava amandava) or red munia rang a bell, and it turned out that we’d first seen it almost a decade ago. It is very common after all. Still, having forgotten it completely, I will consider this sighting of one resting on a cactus at least partly a lifer. For purposes of identification, one has to remember that the bill can change colour, and turns from an orange yellow to a bright red to a dark brown or black according to season. I wondered whether this is due to a changing diet. But then birds which are bright red often are sexually dimorphic, with the female a bright yellow. That is certainly true of this bird. So the change in colour could also be due to the activation or disactivation of a gene. By the time I took a photo of the male, the female had hidden itself, and came out in the open only fleetingly. 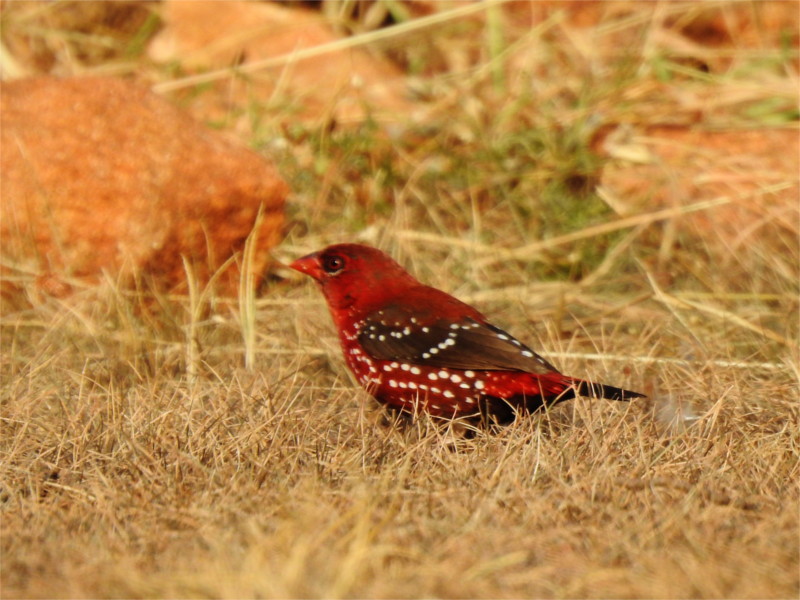 This one inspected the surroundings from its perch high up on the cactus, and then, only after figuring out that the coast was clear, did it descend to the ground. It feeds on grass seeds, and was not attracted to the grains that had been left outside the hide I sat on. I mentally cheered, because its behaviour cannot be manipulated simply by leaving grains out in the open. Why did it visit then? Random chance, or because the company of many other feeding birds can help to warn it against preddators even when it is not looking?