Painted rickshaws are common in many parts of eastern India. On recent trips I’ve spent time photographing them in various places: first in Tripura, then in Assam, and most recently, last week, in the outskirts of Kolkata. A folk tradition of art is very alive in this part of the country, and artists make some money decorating things, the most visible of them being this common mode of transport. Interestingly, rickshaws in Kolkata are as bland as the taxis you see in Mumbai. You see these beautiful pieces of folk art as soon as you cross the boundary of the city. I wonder whether it is municipal rules which prevent this style from diffusing into the city. These paintings seem to be of two kinds. One is a panel which is painted and fixed on to the back of the rickshaw. The other is painted directly on to the side of the rickshaw.

The paintings are stylized. The sunsets, the covered boats, snow covered peaks, the calligraphic stylization of flying birds; these are motifs which appear again and again. Interestingly, I saw only one religious theme, and that was a picture of Kali. I hadn’t realized that parrots are a favourite of folk painters, perhaps that is a recent development. One may call the style a modern vernacular, so different from the Kalighat style of the 19th century, and the Shantiniketan modernists of the mid- and late-20th century. I suppose this vernacular must have developed in the late 19th century and early 20th centuries, and was the background from which the Bengal school rose in the early 20th century. It is wonderful to see that this folk tradition remains alive even now. Perhaps it will throw up new formal movements in the future.

Cliches are cliches because they fit.

A very hard afternoon shower in Bharatpur’s Keoladeo National Park had left roads soaked. At one end of the road you could see a single rickshaw coming. Local investment in tourism takes many forms in this area. The most visible are probably the many hotels which line the approach to the main gates of the sanctuary. But another wonderful form of investment are these rickshaws. Many national parks have cars with trained guides. Here they are replaced by rickshaws. The people driving them are trained naturalists. The best have wide knowledge not only of birds, but also the trees and herbs in this area. They are also enormously curious if they find that you know something better than them, and try to gain as much out of conversations as they can. You could hire bicycles to ride into the sanctuary, but it is good to take the rickshaws at least once. Not only do you support the local economy, you also get to spend a long time talking to a local. That’s always something I look forward to when I travel.

On my way into Madurai I looked out of the car and saw the perfect subject for today’s post. A single door was trundling along the road on the back of a rickshaw. Driving a rickshaw needs a bit of skill, since the pedals are harder than a bicycle, and you really need to push down on them. The hardest part is to start. After it is going, on a level road inertia is a bit of help, and you spend less effort than in starting. By the looks of it, this man wants to give the rickshaw a running start.

The highway to Dibrugarh passed through the small town of Moranhat where we were planning to stop for breakfast. In the little towns of the eastern states, cycle rickshaws are still the main mode of transport. I wasn’t surprised by them, but by the artwork each of them sported. I was itching to jump off the car and take photos. 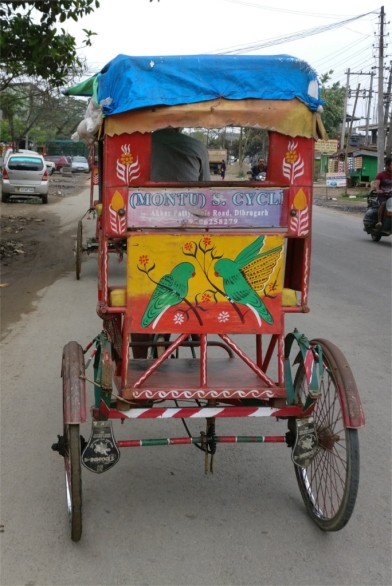 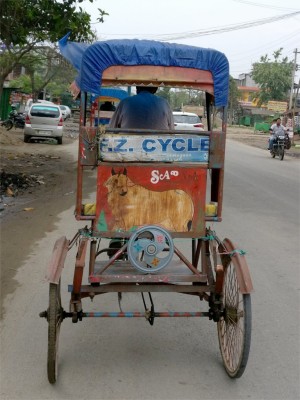 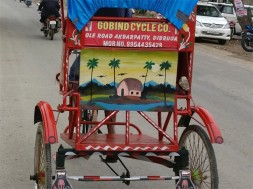 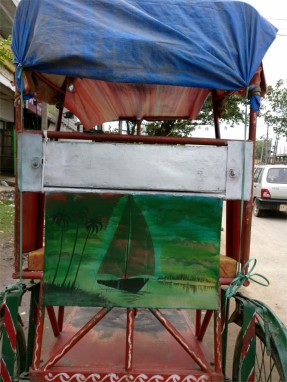 I had my chance when we stopped for breakfast. I stood by the road and tried to photograph each rickshaw which went past. This was naive art, some better than others, but each made a statement. I loved the rural bias in the pictures, but was happy to see the one modern theme as well. I’d last seen these kinds of rickshaws in Tripura. Rickshaw art must be a genre in all of the north-east.