It’s not very often than I hear The Family yelp. When she did, I tore myself away from the ghost crab I was trying to photograph to check on her. She was holding a long conical shell and looking very white. As I rushed up to her I remembered a friend of ours who was working on poisonous cone snails. Was she holding one?

Fortunately, she was not. The creature in the photo you see above had been startled when The Family picked it up from the beach, looked out and used its pincers to explore its surroundings. That’s when I heard the sound from its surroundings. Once we realized that it was not poisonous, I took a few photos before putting it back. It was the second day of Christmas. 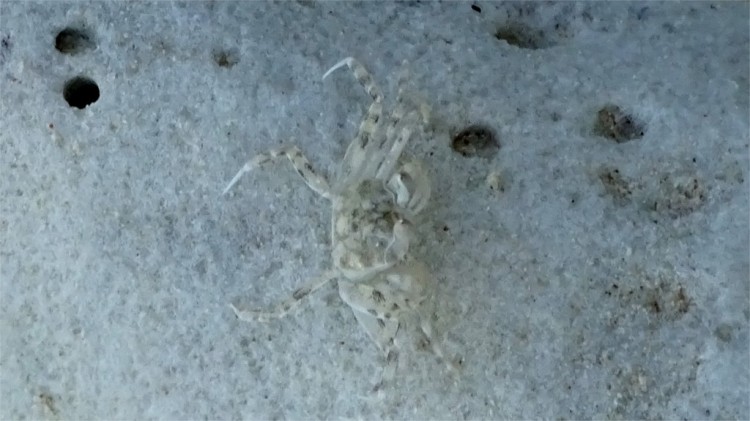 Meanwhile the ghost crab (photo above) would have disappeared. I saw it first as something scurrying over the white sand at the edge of my vision. I looked around and couldn’t see it. But then it moved again as I was looking at it. It didn’t like my camera, and kept scuttling away. Eventually, as it rested on a little stone, I managed to get a photo. Even in the photo it is hard to see it clearly. I’ve enhanced the contrast to make it visible. I’m sure I can see ten legs, but how many eyes does it have, and where?

When you look at the photo above, you notice the holes in the stone. What makes them? Jessica had some answers: in a much colder sea there are creatures called rock borers (duh), piddocks, and sponges. 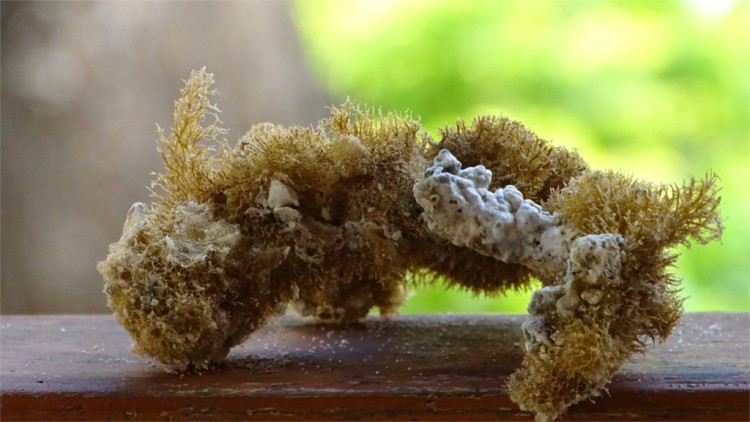 I would not have believed this about sea sponges. But on the third day of Christmas my niece got for me a sea sponge on a rock. We admired it together. The branching filaments of the sponge allow it to sample the water that flows through it, and filter out food. I noticed that the rock on which it grew was full of holes. As for piddocks, I only saw these bivalves the next day. 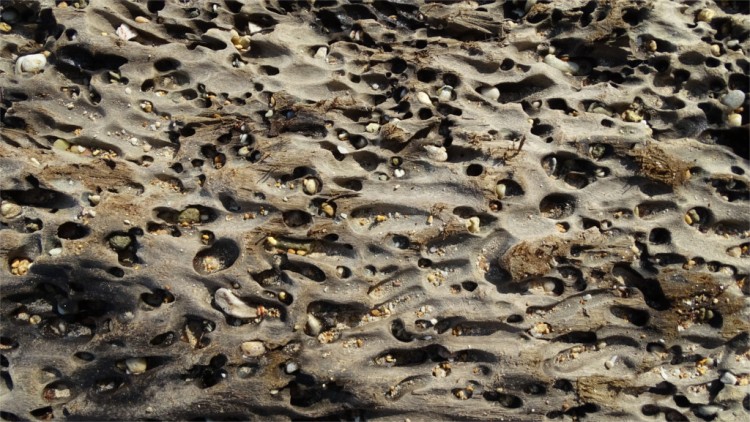 On the fourth day of Christmas, The Family and I admired this large piece of driftwood we had to cross. The beautiful surface has been created by living creatures. In the waters around the Andaman islands, the wood borers are mainly molluscs called shipworms (family Teredinidae) and crustaceans called gribbles. It turns out that there is an immense scientific literature on these, because of the harm they do to wooden structures. However, many of the papers are on the biology and physiology of these creatures. One of the few things I learnt was that shipworms and gribbles eat wood, but piddocks just make holes where they can sit safely. In the photo above you can see a few shells lodges snugly in holes in the wood; these are probably piddocks. Eventually I came across a post which takes you deeper into the world of wood eaters in the sea.

I think these were more interesting than partridges, turtle doves, French hens and calling birds. And no, The Family still hasn’t developed a mollusc sense.