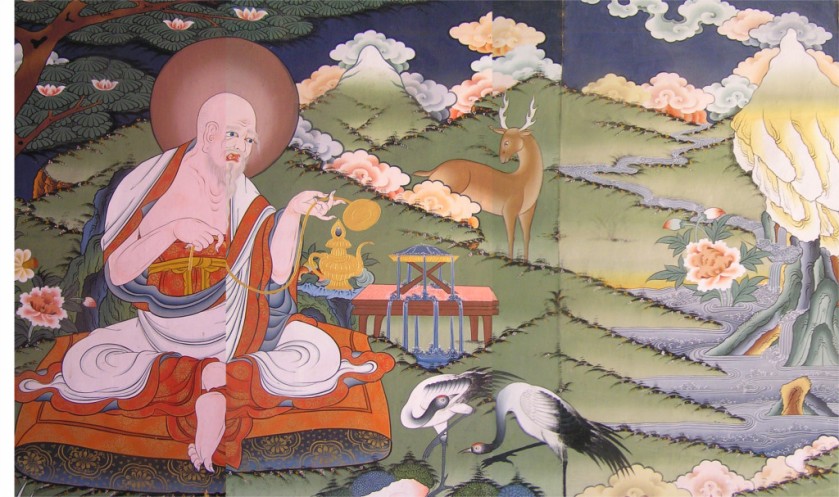 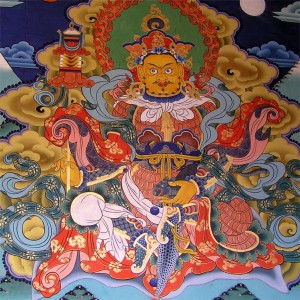 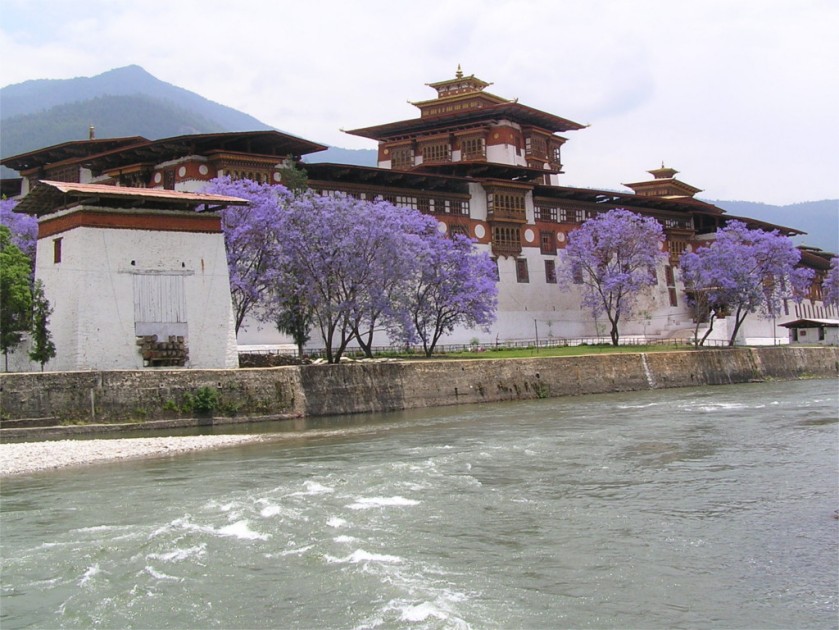 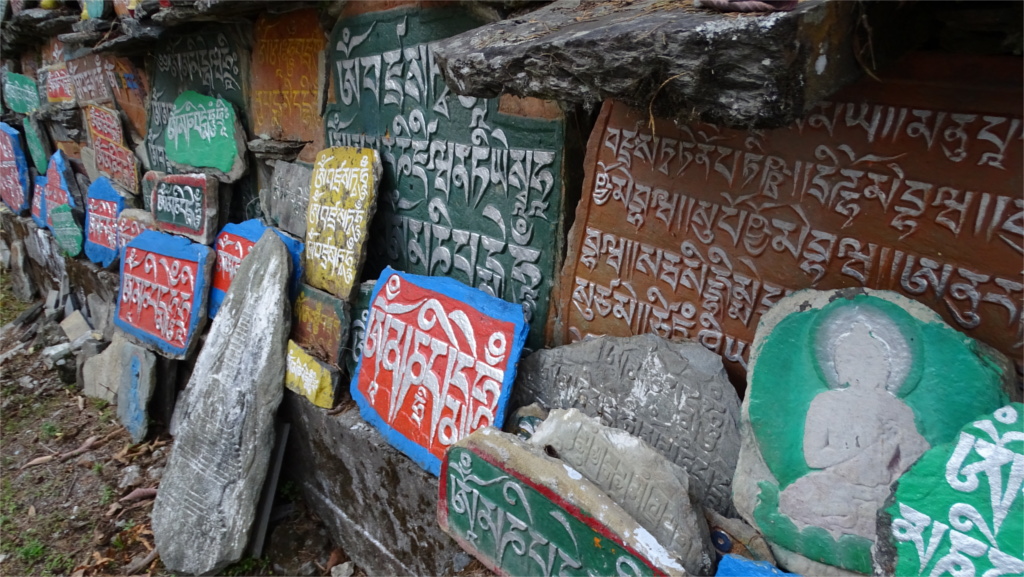 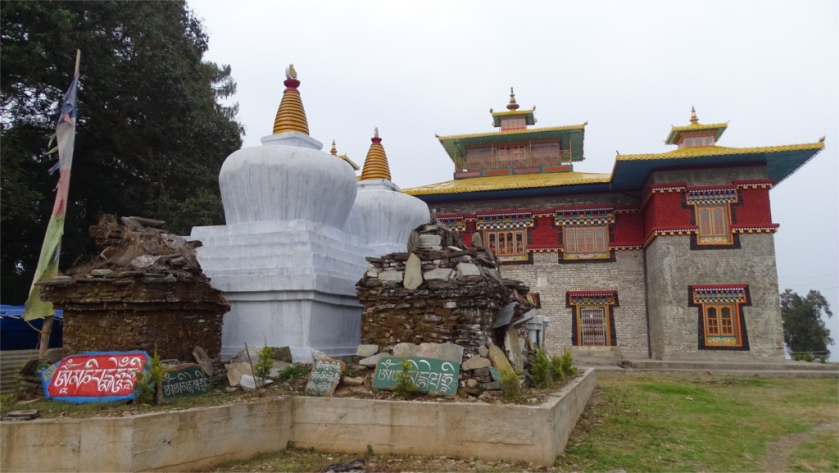 Tashiding gompa is said to have been founded in 1641 CE by Ngadak Sempa Chembo Phunsok Rigzing, one of the three monks who got together in nearby Yuksom to crown the first Chogyal. Various sources say that it is not as old as the Dubdi gompa, which was founded in 1701 CE. The explanation seems to be that the buildings were extended and renovated in 1717 CE.

The Tashiding monastery is almost 20 Kms from Yuksom, and stands on a hill between the Rangit and Rathong rivers. It was nearly 3 in the afternoon when we pulled out of Yuksom, and a little past 4 PM when we reached the gompa. Hem Kumar assured us that the monastery closes at 5. It was a steep climb up somewhat uneven stairs from the road to the monastery. We passed several monks coming down the stairs. The Family asked them how much further to the gompa, and they said we were almost there.

The stairs bring you to the entrance gate called Mani Lhakhang, at the back of the main monastery, which is called the Chogyal Lhakhang. We walked around it to reach the fore-court. The ecclesiastic year starts with the new moon day in February. The Bhumchu festival is held on the following full moon, which plainsmen call the Maghi Purnima. We’d missed it by just about a week. The gompa closes at 4 PM, and the priests walk down to the nearest village soon after. We’d met them as they left. We didn’t manage to enter the buildings and see the stone carvings which are reputedly the most beautiful in Sikkim.

The courtyard has four chortens. You can see two of them and the main monastery in the photo at the top. Opposite it stand the two buildings called the Tsenkhang Lakhang and the Guru Lhakhang (photo above). Guru, or Rinpoche, in this context always seems to refer to Padmasabhava. Just behind these two buildings is the butter lamp house. Off to one side is a covered workshop where stone masons work. All these were closed. The Family said, wryly, another reason to come back here. And the next time we try to come for the festival, I added. 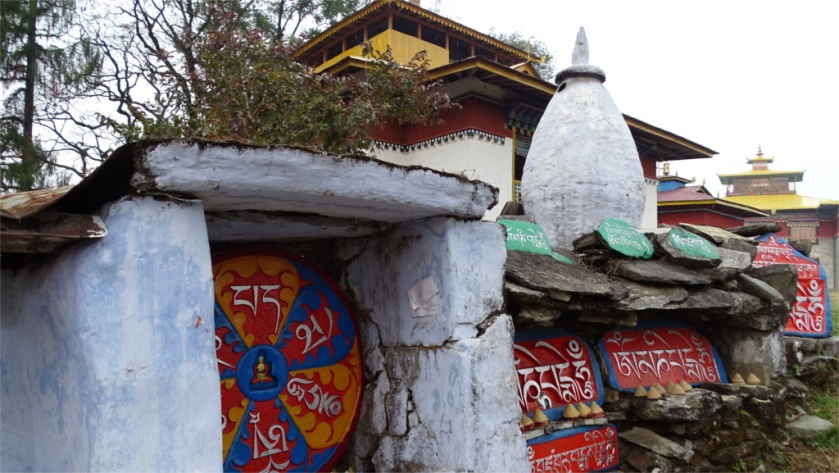 The Bhumchu festival is famous in Sikkim, and involves showing an earthen vase full of water to devotees. The vase is supposed to have been consecrated by Padmasabhava, the monk who brought Buddhism to the mountains (a long version of this legend can be found in Wikipedia). The level of water in the vessel is inspected by priests; more or less than the nominal level is believed to predict floods or droughts. Cups of water are drawn from the vase, mixed with water from the Rathong river, and given to devotees. The vase is then filled again with a measured amount of water, sealed, and kept away for a year. I asked a local tea-house owner what the prediction for the year is, and she said that the monks had not yet declared it.

What was open to us was a yard full of chortens on the far side. This area is surrounded by a low wall (photo above). We could see colourful tablets stacked up against the white walls. 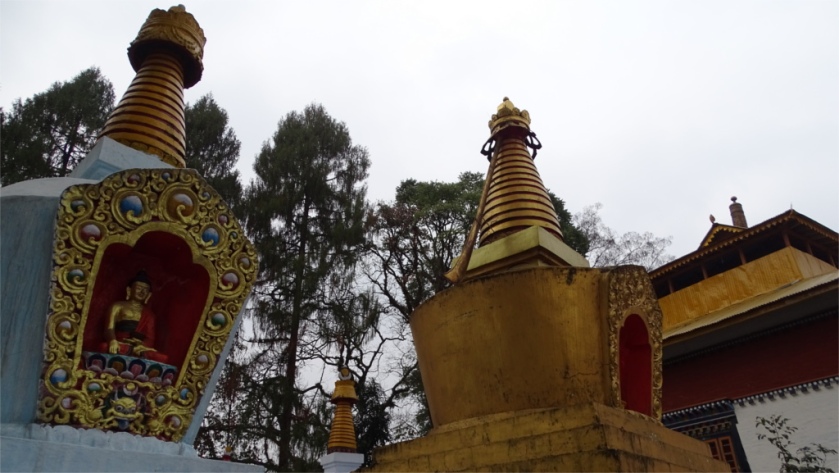 The first drops of rain fell as we entered the gate to the yard of chortens. Should we ring the large bell that stands just inside? We decided that nothing could go wrong if we left it alone. Just behind the bell is a large golden chorten called Thongwa Rong Di (photo above). This was built on the order of the first Chogyal. The mere sight of it is supposed to wash away your sins. It did lift my spirits to see the only major structure in the monastery complex which we were not too late for. A devotee was making a circuit of these chortens while intoning a prayer. The three of us were the only people in this now-deserted gompa.

We walked slowly among the chortens. Some were very old, with bricks and stone barely held together by crumbling mortar. Others, like Thongwa Rong Di, were in very good repair. One chorten had bright paintings on the base (above). The largest of these is a representation of the white Tara: the Bodhisattva of compassion who gives a long and healthy life. This pre-eminent Tara of the Himalayas shades into the Guanyin of China and the Kannon of Japan. The Buddha, called the Sakyamuni in the mountains, is shown next to Tara in two mudras. The one that appeals to me is the bhumi-sparsa mudra (in the center), depicting the moment of enlightenment, the transmutation of Gautama into the Buddha.

The real gems of art in this yard were the tablets. These often-colourful tablets were propped up against anything, the bases of the chortens and the surrounding walls. Most of them said “Om mani padme hum”, but a few had longer inscriptions which I could barely begin to decipher with my rudimentary knowledge of the Tibetan script. It is interesting that with knowledge of the Devanagari and Bengali scripts one finds it somewhat easier to recognize words in Tibetan than Oriya. A few tablets contain icons; again Tara figures more often than the Buddha.

A light drizzle had set in and we decided to leave. The stairs had become slippery with the rains, and we were slower going down than we had been coming up. Soon we were back at the road. Near the stairs stood Pema’s tea house. We decided that a tea was called for.