Someone from the museum in Mumbai had recommended the Indore museum very highly. “Small, but wonderful collection” she said. I remembered later that she also said “Some of it is very well curated.” It was not clear to me whether the garden behind the museum was well curated. Some wonderful stone sculptures were on display there, but not everything was legibly labeled. Most of the pieces in the garden seemed to have been carved sometime between the 11th and 13th centuries. Some of them are in the slideshow below. As always, you can click on one and scroll through if you want a closer look. 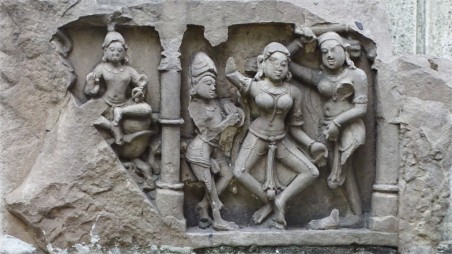 The beautiful four armed female goddess in tribhanga pose was hard to identify; one hand holds a kalasha (pot); the only other hand which remains holds an enigmatic symbol which I cannot identify. The featured image was labelled as being from the 12th century CE. It seems to be part of a longer panel. The part that one could see was a little jewel. There were two attractive memorial pillars from Mandsaur made in the 13th century CE. The one which was more complete is topped by a padmashirshaka, or inverted lotus. Above the lotus is a broken piece, perhaps the remains of a kalasha which would traditionally complete the top. Right at the back of the garden was a part of a bracket or wall which showed some disembodied limbs. These were so beautifully carved that I would have liked to know more about it.

It had rained hard at night and parts of the garden were quite wet. I negotiated the damp patches in the path, looking as much at squirrels which ran over the sculptures as at the pieces themselves. The brilliant green of monsoon and the somber gray stone went well together. I wonder whether this is how the classic Paramara era temples looked when they were in use: stone structures in the middle of growth and nature.

Toledo calls itself the city of three cultures. This is most visible in the monastery of San Juan de los Reyes. I walked through the Jewish quarter, and past the synagogue, into this large monastery built in the Mudejar style by Islamic architects and artisans, and found a stunning building.

There is a wonderful mix of Christian spaces with Islamic decorations in the tiles on the floor and the woodwork in the ceilings along the corridors. But my eyes were caught by the exuberance of the details on the carvings on pillars and pediments.

I have seldom seen this kind of naturalistic detail outside of India. I walked slowly along the verandah bordering the central courtyard, admiring each piece of sculpture and taking a few photos. I’m sure each of these has been fitted into a symbolic belief structure, and if I were well-versed in medieval Christian symbolism I would see other layers of meaning under them.

I just took pleasure in what the simple artists saw: a dog, a pig and a duck. Satisfied with my slow circuit around the central garden, I waddled out.

I had to make a trip to Bhubaneshwar on work. I’ve been there before, but never stopped for tourism in the “Town of Temples”. This time I took two hours to visit two beautiful small temples. One of them was the Rajarani temple. It was built in the 11th century, and is no longer in use. As a result, it is looked after by the Archaeological Survey of India. The name rajarani does not refer to a king (raja) and a queen (rani), but, as I learnt from an ASI info-board, to the local name of the sandstone used.

In the view above you can see that the temple faces east, and has a gate (torana), leading to an outer chamber (jagamohan) with a pyramidal roof, which in turn leads to an inner chamber with a spire (deul). The entrance door is about 2 meters in height, which would make the spire about 9 meters tall; small as these things go. The remarkable thing about this temple are the outer sculptures. You can see in the general view that the sculpture of nagas, women in the shape of snakes, are wrapped around the pillars of the torana. This theme recurs. On the right is a photo of a different column bearing beautiful naga figures.

The faces are beautiful even by today’s standards. Has our notion of beauty really changed so little in a thousand years? This close up of the face of one of the nagas shows the damage done to it. The hoods of the cobras surrounding the head are all damaged, and the woman’s nose is missing. Going by other figures on the facade, it would have been an aquiline nose, unlike that of most people in this region. Either the face is an idealization which came from some other part of the country, or the model was chosen for being exotic.

One of the most stunning sculptures is this one of Varuna, the dikpala (guardian) of the west. As you can see in the photo on the right, here he is shown in the medieval iconography holding the noose of judgement (pasa) in his left hand. This is one of the most beautiful depictions of Varuna which I remember seeing. The stone used in this sculpture is not the same as the red rajarani used in most of the temple. I wonder whether the stone was specially chosen to give him the canonical white (sphatika) complexion.

This badly damaged statue, shown at the left, is that of Kubera, the god of wealth, and the dikpala of the north. He should be holding a pot of wealth, but both hands are damaged, so you don’t know what the figure had in its hand. I base my identification on the fact that the statue faces north. Also, the statue resembles the usual medieval depictions of Kubera with the large belly, somewhat ungainly shape, lots of jewelry, and facial hair. The figure stands above an animal which could be a goat.

I spent almost an hour circumnavigating this temple. It is full of other worldly sculptures: women looking at themselves in mirrors, holding branches of trees, men and women in conversation. The incredibly detailed external sculptures are a contrast with the completely bare interior. The nagas and the other figures over the torana indicate that the temple would have been dedicated to Shiva. Otherwise, it would have been hard to say who was the deity when this jewel box of a temple was in use.