The story of Greek Buddhism seems to be largely forgotten except when events such as the destruction of the Bamiyan Buddhas hit the public’s consciousness. When The Family and I chased after a remnant of the neglected Indo-Greek cultures across a flooded river near Bhopal, I had not seen the magnificent schist statue of the Buddha in the National Museum in Delhi (featured photo). The history of the Gandhara kingdom is well documented, widely researched, easy to find, and seldom referred to. In these unsettled days the story is worth keeping in mind.

The Gandhara kingdom was centred around Peshawar and Taxila, and in the period between about 200 BCE and 600 CE it was the meeting place of three cultures: the Greek, the Indian, and the Persian. It was part of the Mauryan empire. The Emperor Ashok was introduced to governance as the satrap of Gandhara, during the reign of his grandfather, Chandragupta the founder of the empire. Buddhism came to Gandhara (and to the rest of empire) with the conversion of Ashoka. The influx of Greek artists and artisans to Central Asia which started after Alexander’s conquests settled into a constant exchange during the Seleucid dynasty, with spillage into the Mauryan empire.

The Indo-Greek melding which created the style we call Gandhara arose during the 1st century CE, during the reign of Kushan kings.

The featured photo is of a magnificent example of this style. Another one which I liked is the plaster statue of the standing Buddha pictured here. The Kushan kings traded with Rome, and the influence of the imperial Roman style is clear in both the statues. The faces of the Buddhas and the flowing dresses remind me of the flowing robes of 2nd century Roman sculpture, and the faces of Apollo. The statues were often painted and occasionally gilded, but I could not see any trace of paint on the ones I examined. 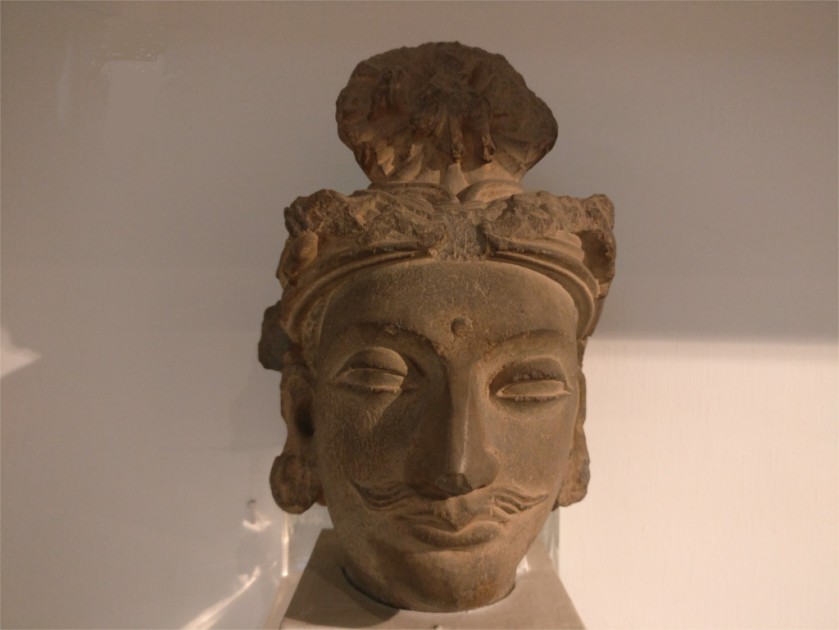 The head of a Bodhisattva that you see above was striking (in spite of being badly lit). The label did not say much beyond the fact that this is dated to the 2nd century CE. A little search later convinced me that this must be a representation of the Maitreya. He seems to have been very popular in the Gandhara tradition, perhaps almost as much as Gautama. The Maitreya sports a mustache in all the pictures that I saw.

The ascension to the throne of the Kushan Emperor Kanishka, who ruled during the period these three artifact were made, dates the beginning of the Saka calendar, the official calendar of the Indian state. Kanishka’s empire extended as far east as Pataliputra and northwards up to Turfan in present day Xinjiang province. Trade with Rome in this period opened up the silk route and is said to be responsible for the spread of Buddhism into China.

I understand that "most of the archaeological finds of Gandhara art have been the result of casual discovery or clandestine treasure hunts". This explains the lack of provenance that I noticed in the labels in the museum. In the absence of modern field data, expert opinions on the history of Gandhara art diverge from each other. Unfortunately, this is a part of the world where the major archaeological sites of Peshawar, Taxila, and Swat valley in Pakistan and Jalalabad, Hadda and Bamiyan in Afghanistan have become less accessible. New scholarly expeditions seem to be unlikely in my lifetime. The full story of the flowering of an Afghan-Greek-Iranian-Indian melding will only emerge in a gentler future.